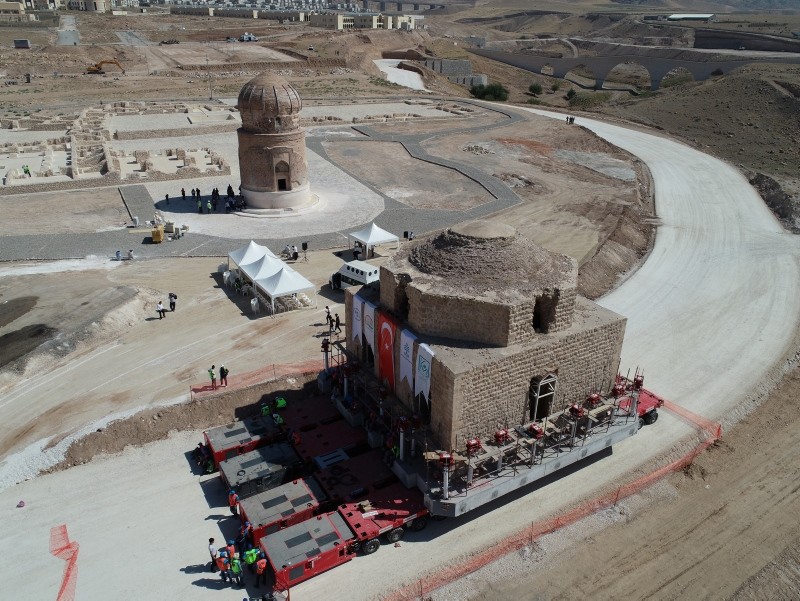 The 800-year-old Artuklu Hamam is being transported from the ancient city of Hasankeyf — which will be flooded due to construction of the Ilısu dam nearby — to the new Hasankeyf Culture Park above the water line.

Authorities are working to save all the important historic sites of Hasankeyf gradually by moving them to the park before the construction of the dam is completed.

According to Batman Governor Ahmet Deniz, six more monuments will be moved.

The next scheduled relocation projects are a mosque and a zawiya — an ancient Islamic religious school.

The 10,000-year-old Hasankeyf is one of the oldest continually settled areas in the world, located on the banks of the Tigris River, known as "the cradle of civilization." The area around the city is home to thousands of man-made caves carved out of limestone cliffs as well as hundreds of medieval monuments, making the area an open-air museum.

Minister of Agriculture and Forestry Bekir Pakdemirli attended the relocation ceremony where the bathhouse was draped with Turkish flags. "The Ilısu dam will be the biggest of its kind in Turkey and fourth largest for generation of electricity. This is a project that necessitates moving our historic legacy. This is exemplary preservation work. It is our duty to preserve the history here and this sensitive approach prolonged the completion (of the dam). More buildings will be moved and the place where they were moved to will be an open-air museum."

The relocation of the bathhouse cost around TL 37 million ($7.1 million), media outlets reported.

The relocation of structures in their entirety is rare in Turkey. The most notable relocation in the country took place in the western city of Yalova in 1930. A mansion, where the founder of Republic of Turkey Mustafa Kemal Atatürk stayed, was moved meters away from its original location upon the orders of Atatürk, who preferred a relocation to the felling of a sycamore tree that had started damaging the building due to overgrowth.