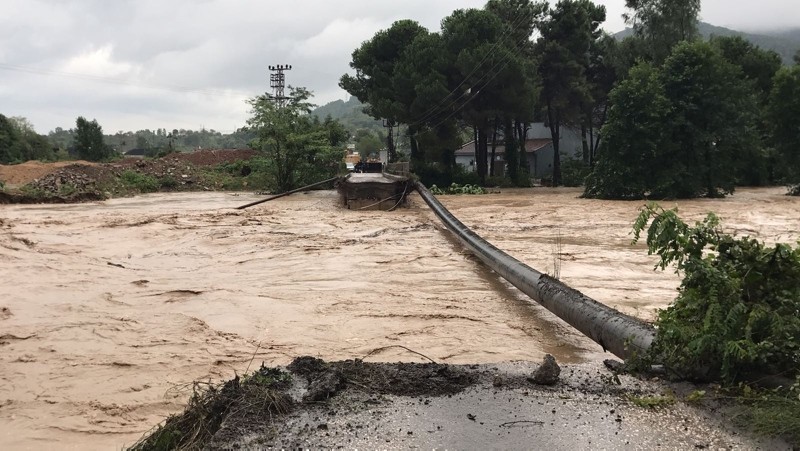 Ünye and Perşembe were the hardest hit districts. Ünye Mayor Ahmet Çamyar said that four bridges linking villages collapsed, while four people were injured in the district. He added that 165 people are waiting to be rescued in flooded areas.

A total of 715 workers, at a hazelnut farm and a textile factory, had to be moved to safety, the Ordu Governorate's office said in a statement.

The Black Sea Coastal Highway, the main artery connecting the region from east to west, was closed to traffic due to flooding, falling rocks and debris.

The coastguard joined rescue efforts. Helicopters, ambulances and bulldozers were dispatched to several districts in Ordu, one of 18 provinces along the 1,700-kilometer Black Sea coast.

Broadcast footage showed people scrambling to higher ground. One elderly man was rescued from the balcony of his two-storey home in the bucket of a bulldozer. Cars and houses were underwater.

The organized industrial zone in Fatsa and houses and businesses in nearby neighborhoods were also affected by flooding.

Hazelnut groves, a main source of income for the region, were damaged due to strong winds and floods during the harvest season. Many producers lost tens of thousands of tons of harvested hazelnuts to flooding rivers and streams. Turkey produces nearly 70 percent of the world's hazelnuts, according to the Customs and Trade Ministry.

Since most settlements are located in valleys and built too close to riverbeds due to lack of space, planning and monitoring, the swelling of the region's rivers due to heavy rainfall often causes damage, particularly in the summer season.