Cities 'bullish' on capturing fleeing sacrificial animals ahead of Eid 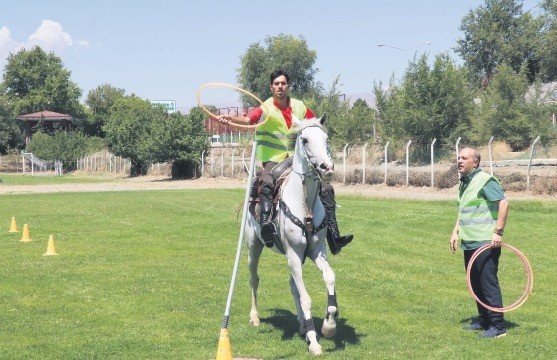 Workers in Erzincan practiced with hula hoops as they learned how to lasso fleeing animals.
by Daily Sabah Aug 09, 2018 12:00 am

Two weeks before Eid al-Adha, a Muslim holiday where the faithful, who can afford to, are obliged to sacrifice animals from bulls to sheep, municipality workers around the country are wrapped up one critical drill: Catching fleeing animals. Scenes of bulls dashing through the streets are all too familiar for the Muslim-majority country every Eid. Lacking the professional means to capture them themselves, sellers and buyers of sacrificial animals are forced to enlist the help of professionals and in recent years, municipalities have enhanced their services to help them. Going beyond the standard lassoing tactic to restrict heavyweight bulls, workers tasked by the municipality to help citizens nowadays employ drones and tranquilizer guns.

In northeastern city of Erzincan, crews polish their horseback riding skills and newcomers learn how to properly throw a lasso. Two among them ride 4-wheel ATVs, a necessary vehicle to pursue animals in rough terrain. Horses will be used in narrow alleys where cars have trouble navigating in pursuit of bulls. In another corner of a pitch used for training, six men hone their sharpshooting skills with tranquilizer guns, though they only need be slightly better than someone who cannot hit the broad side of a barn as the guns are often used on large, confused bulls who stand still briefly after they are cornered. A member of the crew learns how to operate a drone to take images of fleeing bulls, so their route can be mapped, and they can be stopped faster. Everyone needs to be fit enough to chase fleeing animals, so workers had to run for 6 kilometers every day during the drill and do push-ups to be eligible for the job that will last for roughly three days.

The municipality of Istanbul, the country's most populated city, formed 15 teams for the task, and each team will have two workers who will work in different spots in the city's Asian and European sides. There were six teams last year, and they succeeded in restraining 23 bulls throughout Eid; however, the expanding population has forced authorities to increase the number of teams. Eid is observed with the ritual killing of livestock, but the slaughters that go awry make headlines every year, with hundreds rushing to hospitals after they injure themselves during the sacrifice and others chasing around fleeing bulls.