Charities reach out to world's needy, displaced with Eid aid 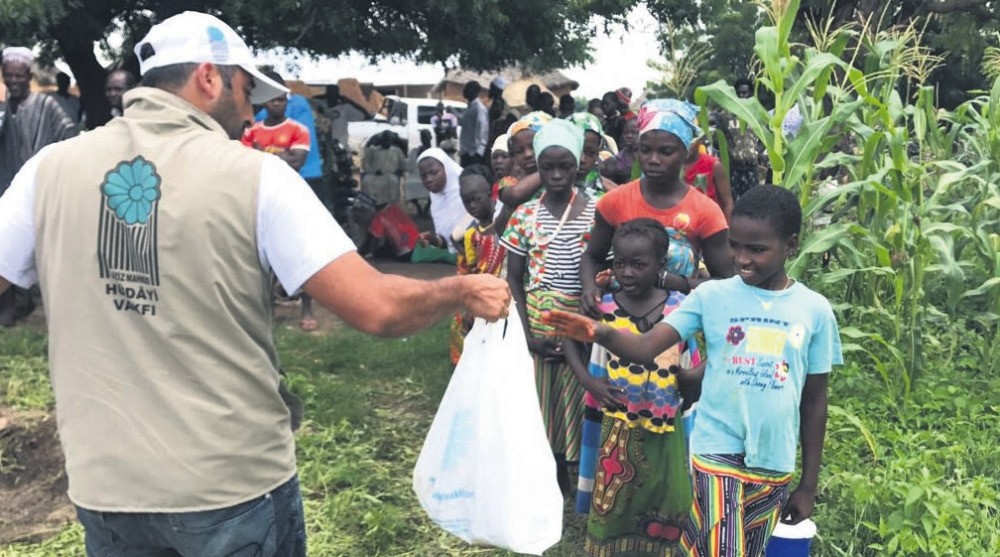 Volunteers of Aziz Mahmud Hu00fcdayi Foundation deliver aid in Ghana in 2017 Eid al-Adha campaign. The foundation will reach out to more than 40 countries in this year's campaign.
by Daily Sabah Aug 11, 2018 12:00 am

Turkish charities roll out their traditional aid campaigns for the upcoming Eid al-Adha. The Istanbul-based Aziz Mahmud Hüdayi Foundation aims to reach out to thousands across the world, who will receive free meat on the occasion of the festival that involves animal sacrifice

Eid al-Adha is a festival where the faithful, who can afford it, are obliged to slaughter cattle, sheep and other sacrificial animals. Aid campaigns focus on delivering the meat of the slaughtered animals to the poor both in Turkey and in other countries. The Aziz Mahmud Hüdayi Foundation based in Istanbul recently unveiled its aid project entitled "Sacrifice is Closeness to God."

The foundation, named after a famous Ottoman-era Sufi mystic, will conduct the sacrifice of donated animals in more than 40 countries this year. Donors are required to pay only TL 650 ($106) for their sacrificial animal donation. With the donations, the foundation buys animals in countries where the aid will be delivered, slaughters them and distributes the meat.

Since 1985, the year it started its first international aid campaign on the occasion of Eid, the foundation reached out to about 4 million people in more than 40 countries where it also conducts different aid projects and education programs. It also runs soup kitchens serving to the poor in those countries.

The foundation's campaign focuses on conflict zones, places where a large portion of the population are displaced due to conflicts, countries where poverty is prevalent and places with historical, cultural and ethnic ties to Turkey. The foundation has presence in places, from the Gaza Strip - where tens of thousands live under the Israeli blockade - to Somalia, from Kosovo, Albania and Macedonia in the Balkans to Central Asian countries, such as Bangladesh, Pakistan and Mongolia.

Other charities also seek to expand their Eid aid this year. The Turkish Red Crescent is at the forefront of efforts for humanitarian relief to millions. The charity's president Kerem Kınık says they will deliver meat aid to some 1.5 million people abroad this year, in the tenth year of its campaign. It will reach out to some 40 countries. Its campaign will also debut this year in Ecuador which was hit by a major earthquake in 2016.

The Deniz Feneri Association also plans a campaign in 40 countries and asks its donors for an extra donation other than TL 750 (standard price of livestock kept for sacrifice) for the campaign in Palestine. Donations for Palestine are set at TL 1,700 by Deniz Feneri which will also extend a helping hand to Benin, Burkina Faso, Burundi, Algeria, Chad, Ethiophia, Cote D'Ivoire, Ghana, Cameroon and other African countries, as well as Afghanistan, Bangladesh, Indonesia, Kazakhstan and Bosnia Herzegovina.

The Yardımeli Association also stands out among other charities for different rates of donations for every country where the aid will be delivered, based on the severity of poverty and hunger in those countries. The charity will also plant a fruit tree in Africa and Turkey for each donation.

The Mirasımız (Our Heritage) Association that focuses on restoration and maintenance of Ottoman-era buildings in Jerusalem, seeks donations to slaughter animals for Jerusalem only. The charity also asks for an extra donation of TL 100 for clothes, which will be delivered to Palestinian children in Jerusalem. It will also distribute food packages to the needy families in the city.

Doctors Worldwide, a medical charity, will both deliver meat aid and conduct check-ups against diseases related to undernourishment or malnutrition in countries where they will deliver the aid.

The Turkish Diyanet Foundation, a charity linked to Turkey's state-run religious authority, will slaughter sacrificial animals on behalf of donors in 145 countries and deliver them to the the displaced and other disadvantaged communities.

Turkey was the most charitable nation in 2017 with nearly $8.1 billion spent in humanitarian aid. Almost 30 percent of all international humanitarian aid, $27.3 billion, came from Turkey, according to the Development Initiative's (DI) Global Humanitarian Assistance Report.