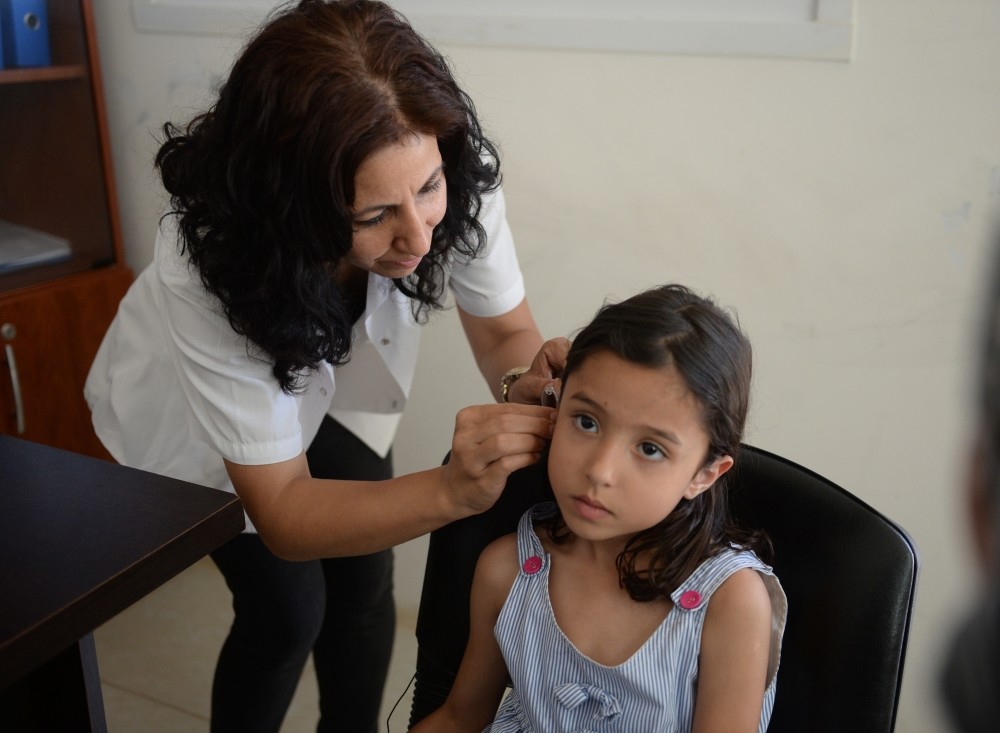 Leyan Tame was fitted with a hearing aid by doctors in the southern Turkish city of Kilis.
by Daily Sabah Aug 14, 2018 12:00 am

Four years after she lost her hearing, six-year-old Leyan Tame is excited to hear again with the help of Turkish doctors. Tame, who lived in Syria's Aleppo with her family, went largely deaf during the bombing of a building next door to her home, by warplanes of the Bashar Assad forces. She was among thousands of children scarred by the now seven-year-old war. Displaced by the conflict, the family took shelter in Turkey after Tame lost her hearing, unaware that the two-year-old could not hear them. They first blamed the trauma of war for her unresponsive state. It was only six months ago they noticed she was actually deaf when Tame did not hear an approaching car honking horn. Seeking help, the family who live in the southern Turkish city of Osmaniye, contacted a Turkish charity. The charity arranged a visit to Turkish doctors for the family and got a hearing aid for the girl.

Gaysa Samiz, mother of the little girl, said she was very happy that Leyan could finally hear her properly, years later. Speaking to Anadolu Agency (AA), Samiz said she did not notice that her daughter had gone deaf during the bombing in 2014. "There was smoke everywhere [when the bomb dropped] and I called out to my daughter. She just stared at me and cried. I didn't know she went deaf then. She barely spoke. She would only say 'mom,'" she recalled.Once in Turkey, the mother noticed more changes in her daughter. "She wouldn't talk much and didn't hear everything. One day, we were going to a playground. A car approached and honked at us. She didn't hear anything at all. This was when I understood there was something wrong," she says.

The family then sought help and came across the Turkish charity Humanitarian Aid Foundation (İHH) which helps the children of Syrian refugees in Turkey. Doctors diagnosed Leyan and decided to give her a hearing aid. "They helped us very much, may Allah bless them," the girl's father Wail Tame said.