Driving from the car roof was a ‘momentary lapse' 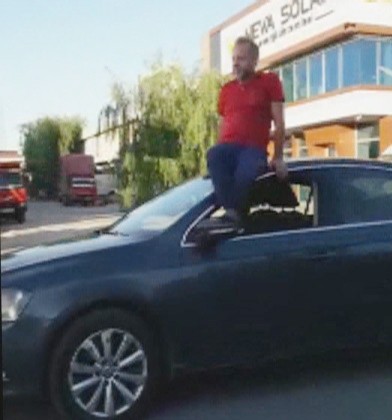 A man from the central Anatolian province of Konya was arraigned yesterday for driving his car with his feet while sitting on the roof. The obviously flexible Süleyman Çiçekçi was caught on video driving the car from the roof, steering the wheel with his feet through the driver's window. As he was leaving the police station to be taken to a hospital for mental and physical evaluation, he told reporters, "You may call it a momentary lapse of reason, or ignorance. I made a mistake and will pay the price."

The video, taken on a street in the central Karatay municipality, was assessed by local police who identified the car and the driver. Çiçekçi said he did it on a Sunday, taking advantage of the empty road. "I don't recommend it to anyone. It's even dangerous to try. I still don't know why I did it. I am remorseful and hope no one else will do anything like this again," he said.

He added that he had been forced to pay a fine and lost his driver's license. The police released a statement saying that Çiçekçi would be examined by doctors who will check whether he possesses the mental and physical faculties necessary to drive a car.