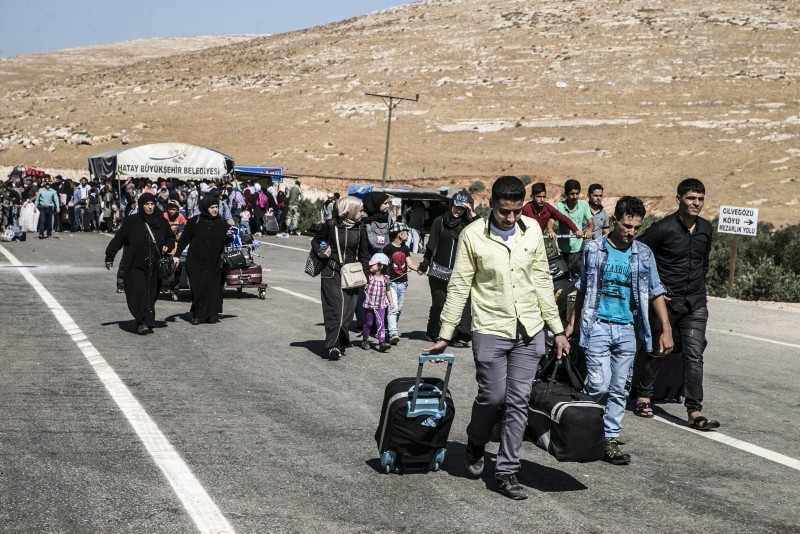 Thousands of Syrians residing in Turkey have registered to spend their Qurban Bayram holiday or Eid al-Adha in Arabic, back home with family and friends. Areas that have been secured such as Azaz, Mare, Sawran, Akhtarin, Afrin, Jarablous and Al-Bab will be open to over 50,000 Syrian citizens during the holiday period.

In Hatay's Reyhanlı district, more than 35,000 Syrians continue to register for transfers through the Cilvegözü border gate. Groups of Syrians have flooded the tents located in the area that are now controlled by customs officials. Priority is being given to the elderly and those that are unwell, ensuring a safe passage back to Syria. Children who haven't been vaccinated have also been tended to before final checks conducted by custom officials. Those that have been affected by the hot weather have been specially tended to by police and migration administration officers.

The process that began on August 6 requires passengers to have passports, pre-registration documents and temporary protection cards to enter their hometowns and return safely.

In addition, customs authorities in Kilis province have also registered over 27,000 Syrians for temporary transfers to their hometowns. 27,380 people have already been registered as part of the processes that began two weeks ago and they will conclude on August 18 on condition of returning before December 31.

Nedim Hamdo, one of the many Syrians that will make it back home and finally see his family, arrived in Turkey almost 5 years ago and now resides in Gaziantep.

"I have not been able to return to Syria in 5 years. Most of my relatives are in Syria. We finally feel like it is Eid after a very long time," he told Anadolu Agency (AA).

Esra Sozan, who also found refuge in Turkey, thanked President Recep Tayyip Erdoğan for making it possible to return back home for the holidays after four years of separation from her children and relatives.

"Hopefully the war will end and we will permanently return back to our country," she said.

More than 3.5 million Syrian citizens currently live in Turkey as more than 500,000 people have been killed during the seven-year-long civil war, in addition to and one-thirds of the country's pre-war population of 30 million displaced.