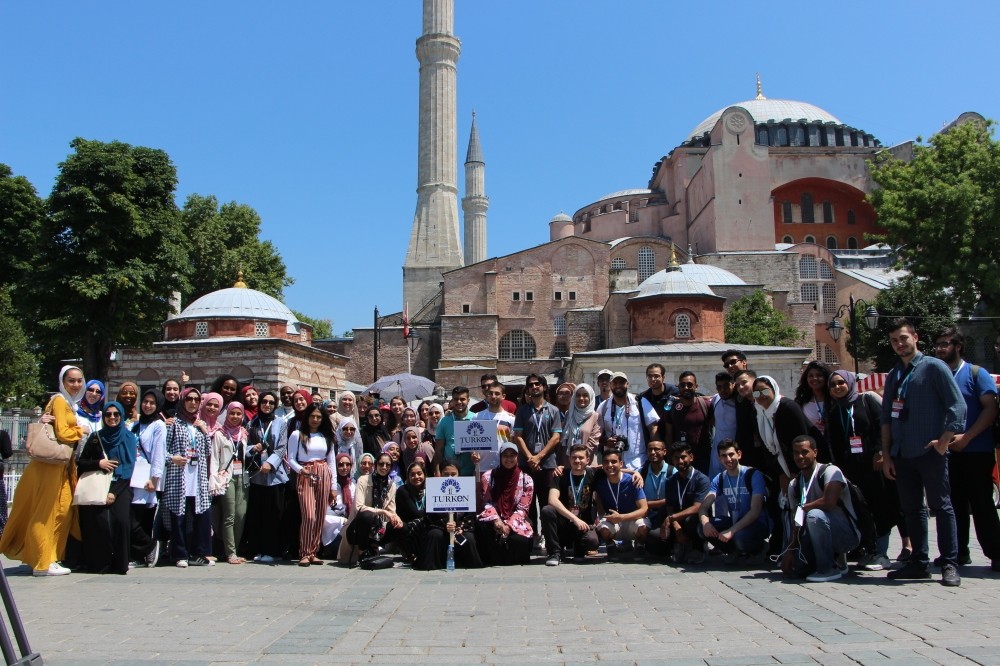 American and Canadian Muslim students seen in front of the Hagia Sofia Museum in Istanbul as part of their sightseeing tours during the TURKEN Youth Brigades Summer Program.
by Daily Sabah Aug 17, 2018 12:00 am

The Turken Foundation was established in 2014 by two of Turkey's most respected education foundations, Ensar and the Turkish Youth and Education Service Foundation (TÜRGEV), and Ibn Haldun University in Istanbul.

It was founded to assist eligible students with housing, scholarship and other cultural programs, and help with their educational experience abroad. Turken works to improve cultural and social exchanges between Turkish students and their American, Canadian and British counterparts.

One such program organized by the foundation was the Turken Youth Brigades Summer program, in which American and Canadian students were able to communicate and cooperate with local students while establishing contacts with Turkish academics.

The aim is to foster relationships with American and Canadian Muslim students while creating a culture of cooperation among Muslim youth.

In the program, students spent the first two days at Ibn Haldun University attending academic conferences and studies in humanities and issues that affect the Muslim world. After the educational program, they traveled throughout and had an immersive cultural experience.

Educational activities included an overview of Ottoman history, Turkey's place and historical mission in the Islamic World, cultural policies in Turkey, challenges to Muslims in the modern world and contemporary Muslim religious issues. Workshops on Islamophobia in the West were also held, and students made presentations on various aspects of the issue.

In Ankara, they visited the Beştepe Presidential Complex, the Foreign Ministry and Parliament.

The Turken Foundation plans to continue the program with an increasing number of students from the U.S. and Canada to establish connections among Muslim students and promote Turkish cultural and educational opportunities.