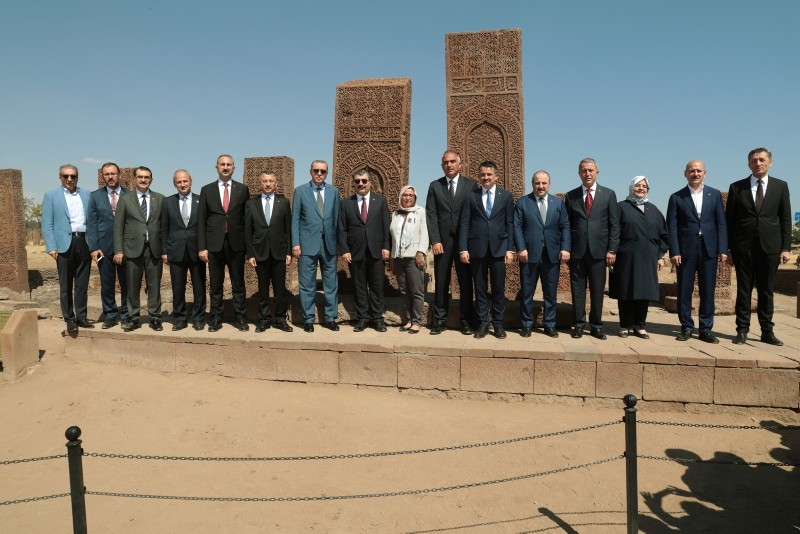 President Recep Tayyip Erdou011fan (7thL) and others members of the cabinet visit the historic Seljuk graveyard in Ahlat district of eastern Bitlis province, on Aug. 26, 2018. (AA Photo)
by Daily Sabah Aug 26, 2018 12:00 am

Turks around the country Sunday marked the 947th anniversary of the Battle of Manzikert (Malazgirt in Turkish), in which the Seljuk Turks claimed victory over the Byzantine Empire in 1071 that allowed the Turkish conquest of Asia Minor, or Anatolia, over the following centuries. It is seen as an epoch-changing event, after which the previously Greek region rapidly became Turkish. It took only several decades for many to refer to Asia Minor as the land of the Turks.

President Recep Tayyip Erdoğan, Parliament Speaker Binali Yıldırım and Devlet Bahçeli, the chairman of the Nationalist Movement Party (MHP) delivered speeches in a ceremony held at memorial park near the historic battle site, commending that the "spirit of Manzikert" was still alive after centuries to combat all political, diplomatic, economic and military threats against the Turkish nation.

Bahçeli was first to address the 75,000-strong crowd, saying that the Turkish nation was scared of no one and would confront all threats irrespective of the source.

Yıldırım, who spoke right afterwards, said those who tried to divide the nation would fail because the founding ethos of Turks was so strong.

"All the regions tied to us through historical, cultural and religious links look up to Turkey, which will never let them down," he said.

He said humanity faced threats from xenophobia and religious intolerance, which sparked violence, adding that Turkey would continue to offer its support to international institutions that foster peace and stability.

Erdoğan was last to address the crowd. He said there would be serious environmental renewal efforts done both at the scene of the battle and in Ahlat, the region where Seljuk Sultan Alparslan set up his base on the eve of the battle.

The president said the Battle of Manzikert foreshadowed the succeeding conquests of Bursa, Edirne and Istanbul. He said the battle was the moment Turks emerged as a power in history and if Turkey forgets the spirit of Manzikert, it will lose its history and future.

He also specifically addressed youths, asking them to protect and preserve the nation's history to ensure its future.

"Don't forget what our ancestors sacrificed to ensure our strength," Erdoğan said.

He also underlined the importance of remembering the sacrifices made on the night of July 15, 2016, against the coup attempt by the Gülenist Terror Group (FETÖ).

The president noted the importance of Anatolia as the linchpin of regional peace and stability, adding, "If Anatolia falls, Africa falls. The Caucasus falls. The Middle East falls. Central Asia falls."

"That's why we need to be strong in economy, diplomacy, military, industry and all relevant agencies and institutions," he said, adding that Turkey did not have the luxury to display a moment of weakness.

"Vultures are always circling," he said.

Erdoğan also commended what he called the "spirit of 1071" in a Twitter message Sunday.

"As long as the spirit of 1071 remains alive, nothing will prevent the achievement of Turkey's 2023 objectives, and 2053 and 2071 visions," the president tweeted.

Turkey's biggest safeguard is the "determination of our people to protect their independence, their motherland, and their future," even in the face of economic attacks, he added.

President Erdoğan drew parallels between the struggles of the Battle of Manzikert and the July 15, 2016 coup attempt, which left 250 people killed and nearly 2,200 injured.

In his visit to the region, Erdoğan was accompanied by Vice President Fuat Oktay, members of the cabinet, chief of the general staff and army, navy, air force and gendarmarie commanders.

Prior to the ceremony in Malazgirt district of Muş province, some 140 kilometers west of the border with Iran, Erdoğan and the accompanying delegation visited the historic Seljuk cemetery in Ahlat district of Bitlis province. The president also held a brief rally in the town.

On Aug. 26, 1071, the Byzantine Emperor Romanos IV Diogenes' army took on the Seljuk army of mostly mounted archers, led by Sultan Alparslan, suffering a huge defeat. Romanos was taken captive, before being released by Alparslan. According to the agreement between the two leaders, a few border posts were handed over to the Seljuks. The deal allowed Sultan Alparslan to turn his full attention to the Fatimids ruling over Egypt.

However, the emperor was soon afterward toppled, tortured and killed by rivals, before the empire erupted in a very destructive civil war. The agreement between the two leaders was not ratified by the new emperor, who rejected its terms. The civil war allowed nomadic Turkmen tribes following in the footsteps of the Seljuk army to flood and take over most of Anatolia, apart from a few outposts on the coast. Alparslan did not live long after the battle, dying at the hands of an assassin a year later.

The conquest of Anatolia also directly resulted in the Orthodox Christian Byzantine Empire to seek help from the Catholic Vatican. Pope Urban II used Byzantine Emperor Alexios I Komnenos's request for military aid to declare, at the Council of Clermont in 1095, a general mobilization of the Western Christendom against the Turks who had occupied Anatolia and much of the Middle East. The resulting mass invasion is called the Crusades.

The Battle of Manzikert is seen by Turks as the beginning of the transformation of Anatolia as the land of the Turks.

The last of August is being observed as the Victory Week, which marks two key historical victories by Turkish forces: the Battle of Malazgirt and the Great Offensive of Aug. 26, 1922, the biggest military operation of the Turkish War of Independence that saw the invading Greek army soundly defeated.

The 96th Victory Day on Aug. 30 commemorates Turkey's victory in the Battle of Dumlupınar, in the Aegean province of Kütahya, part of the Great Offensive.