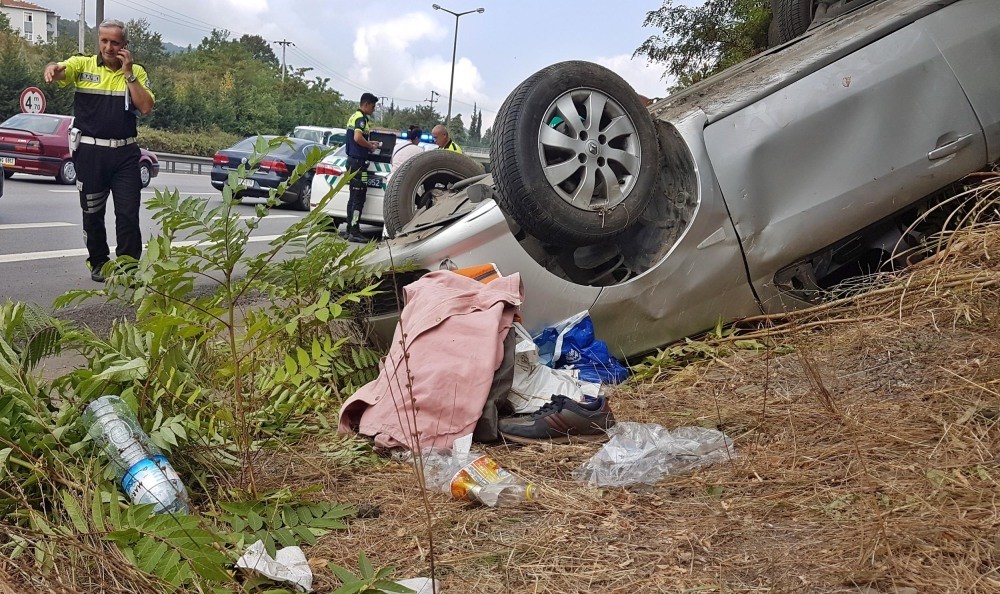 Police at the scene of an accident that took place as a family of three were headed home to Istanbul after a trip to Zonguldak province, Aug. 26. Driver of overturned car was injured, while his wife and daughter escaped with minor cuts and bruises.
by Daily Sabah Aug 28, 2018 12:00 am

More than 140 people were killed and hundreds of others were injured in traffic accidents over the nine-day break for Qurban Bayram. The death toll, slightly higher than previous years, shows traffic inspection and awareness campaigns did little to deter reckless drivers, the main factor in accidents

Everyone, from the president to children in public service ads, repeatedly warned drivers to drive carefully; however, reckless drivers risked both their lives and the lives of others during the nine-day holiday, which saw millions traveling across the country. A total of 147 people were killed, and 702 others were injured in traffic accidents during the Muslim holiday of Qurban Bayram (or Eid al-Adha in Arabic). The death toll was higher compared to the 2017 figures for accidents during the lengthy holiday but not exceptionally more than traffic casualties in the previous years.

Qurban Bayram, one of the two major Muslim holidays where millions hit the road for vacation or to visit relatives in other cities in Turkey, is an occasion for one of the biggest exoduses, especially from big cities in country's west, such as Istanbul, Turkey's most populated city. Motorists and bus drivers drive hours to their destinations in the heartland of Anatolia, and the country's north and the east, while southern Turkey attracts a large number of visitors with its popular beaches. Although the country's road network was significantly improved compared to the past, when a portion of accidents were blamed on poor road conditions, reckless driving is the main factor in most accidents nowadays, according to official data. Ahead of the bayram, and to curb the risks posed by reckless drivers, Turkish authorities renewed a campaign against traffic accidents, increased the number of traffic police and improved traffic monitoring services. "Red Whistle," a new awareness campaign that seeks to enlist the aid of minors to warn adults against the dangers of reckless driving, was launched this year, with police distributing the red whistles to children, hoping they would warn their parents when they breached traffic rules.

Still, between Aug. 17, the Friday before the start of the official holiday, and Aug. 26, at least 192 accidents took place across Turkey, with 28 reported on the holiday's second Sunday alone. The overall high number of casualties is linked by state officials to more cars on the road.

Every year, traffic accidents take an emotional and financial toll on Turkey despite the safety measures. Official figures for 2017 show that 7,427 people died in the more than 1.2 million accidents and 300,383 people were injured. Only 127 more people were killed when compared to 2016, highlighting the need for more safety awareness despite years of campaigns urging drivers not to succumb to road rage. Figures also show that the most fatal accidents took place in the month of July and the least in February. Some 67.4 percent of the accidents happened in the daytime.