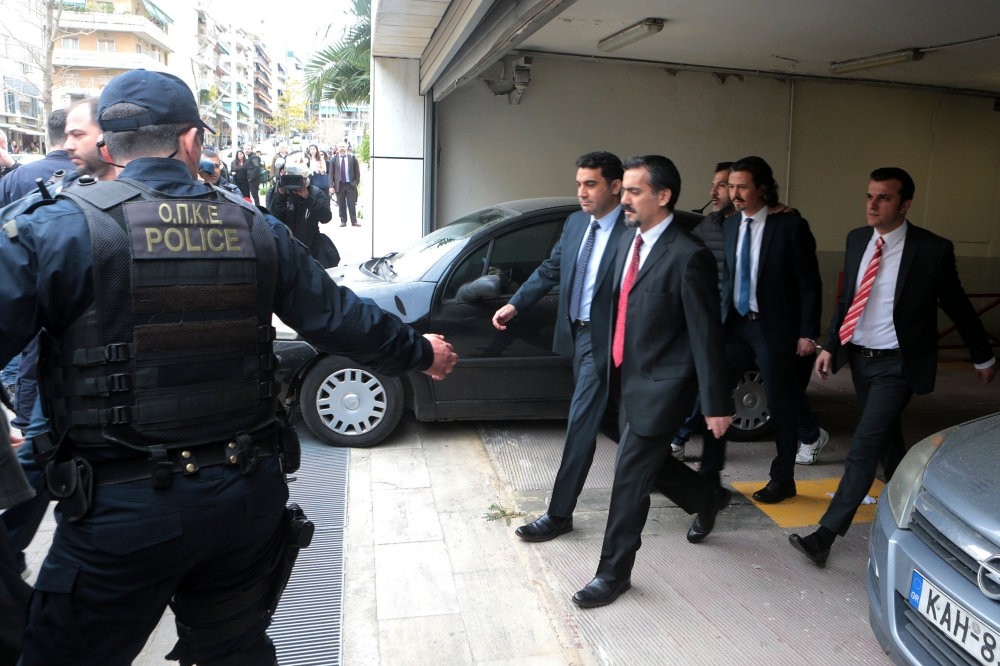 Greek police officers escort eight Turkish putschist officers out of a courthouse in Athens in March. They were the first group of suspects, wanted by Turkey for links to the 2016 coup attempt, to take shelter in Greece.
by Daily Sabah Aug 29, 2018 12:00 am

Greek authorities acknowledged that two men accused of joining the July 15, 2016 coup attempt in Turkey were released and moved to a secret location while authorities assess their asylum applications. Halit Çetin and Fatih Arık, members of the elite Underwater Offense commando unit of the Turkish Army, fled to Greece in 2017 after Turkey issued arrest warrants for the duo for their involvement in the coup attempt engineered by the Gülenist Terror Group (FETÖ).

In line with legal procedures, Çetin and Arık were taken into custody and held in a refugee camp for 18 months, a formal period for detention. Speaking to Anadolu Agency (AA) on Monday, Greek police spokesman Theodoros Hronopoulos said the two men's detention period ended last week and they asked for "protection." He added that they were relocated to a secret place. A lawyer for Çetin and Arık earlier claimed that she did not have access to her clients and they were likely "extradited" to Turkey. Yet, Greece is known for its embrace of coup plotters and terror suspects wanted by Turkey.

Earlier this year, Greece granted asylum to three out of eight putschist soldiers who fled Turkey to the chagrin of Turkish authorities. The suspects, who hijacked a military helicopter and landed in Greece hours after the coup attempt was thwarted, were released from custody in May after a mandatory detention period of 18 months expired. They are being held "in a safe place outside Athens" until the conclusion of asylum requests, according to Greek media outlets.

FETÖ is accused of carrying out a coup attempt that killed 250 people through its infiltrators in the military. After strong public resistance helped quell the attempt, Turkey launched a nationwide crackdown and a global campaign to bring members of the terrorist group to justice.

The number of suspected members of FETÖ trying to flee to Greece increased in the same period, with more Gülenists encouraged by lax treatment of putschists seeking to cross into the country. On Monday, two former employees of Turkey's National Intelligence Directorate (MİT) who were fired for their links to FETÖ and wanted by Turkish authorities, were caught by border guards in Edirne, a province bordering Greece, while they were trying to sneak into Greece.

Ankara formally requested from Greece the extradition of the FETÖ members who were behind the coup attempt, to face trial in Turkey.

Despite the Greek government's preference to extradite the eight suspects, the Greek judiciary has repeatedly denied the applications. Turkey earlier condemned rulings not to extradite coup suspects as "politically motivated." The two countries, which have a past tainted by hostilities, recently sought to improve their relations and have agreements in place to fight terrorism.

Çetin and Arık, both in the ranks of sergeant, were among 30 commandos aboard a military plane that took off from Istanbul and landed at Akıncı, an air base in the capital Ankara used as a command center of the putsch by coup plotters. The commandos are accused of aiding the putschists who took over the Akıncı base. Twenty-five among them were captured, while three others remain at large. Three suspects among those captured after the coup attempt had admitted that they were initially assigned to "capture" President Recep Tayyip Erdoğan, but senior putschists then changed the plan and dispatched them to Akıncı.

Greece has been repeatedly accused by Turkey of being a haven for terrorists who committed crimes against Turks. This year alone, Greek courts ordered the release of members of the Revolutionary People's Liberation Party-Front (DHKP-C), which is recognized as a terrorist group by the European Union.