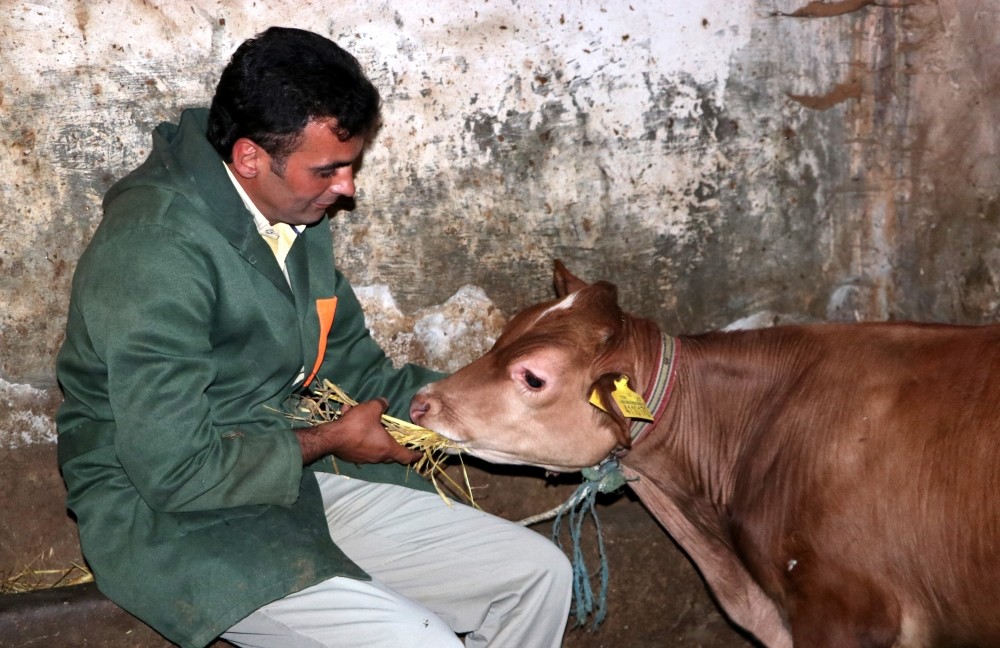 Metin Yalu00e7u0131n tends to the cow which has become a celebrity for its daring escape from slaughter.
by Compiled from Wire Services Aug 29, 2018 12:00 am

One week after the luckiest break of its life, a cow that won over hearts across the country for its resilience has gotten another shot at life. A popular singer decided to purchase the animal and spare it from slaughter yesterday after the bovine made headlines with its escapades during Qurban Bayram (or Eid al-Adha in Arabic), where animals are traditionally sacrificed by the Muslim faithful.

The cow was about to be slaughtered when it broke free from its enclosure and jumped into the sea in Rize, a city on the Black Sea coast. It was found by fishermen in the neighboring city of Trabzon three days later on the last day of Bayram, apparently having swum the whole distance.

The cow, which could barely stand up after swimming dozens of kilometers, was sent back to its owner in Rize, but its story garnered sympathy from the public. One of the owners had stated that they may not slaughter it after all the trouble the cow went through. Haluk Levent, a singer known for his online charity campaigns, stepped in and reached out to the owners.

Metin Yalçın, one of the owners, said many people had called him to buy the cow so that it could be spared after its story went viral on social media. "I'm a big fan of Haluk Levent and was surprised when he called me and offered to buy it. I immediately agreed," he told Anadolu Agency (AA).

Haluk Levent told Demirören News Agency that he felt sad when he first saw the images of the cow at sea. "An animal who managed to swim so long for its life should not be slaughtered. I was happy when I found out the owners did not kill it," Levent said, adding that he named the cow Ferdinand after the children's book "The Story of Ferdinand" about a peaceful bull. The lucky bull will stay at an animal shelter in western Turkey.

The Qurban Bayram holiday, or the "Feast of Sacrifice," is held to commemorate Abraham's test of faith. Muslims slaughter livestock and distribute the meat to family, community members and those less fortunate.