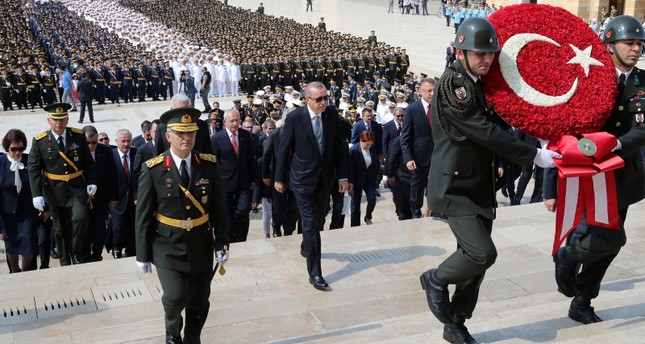 Turkey marked Thursday the 96th anniversary of a battle that paved the way for the country’s independence, which is traditionally observed as Victory Day. President Recep Tayyip Erdoğan vowed that 'threats and attacks will not deter us' as the country faces challenges from multiple terrorist groups and an economic war

Victory Day, an occasion to remember the heroes who helped Turkey gain its independence after the fall of the Ottoman Empire, was marked Thursday in nationwide events. The day marks 96th anniversary of a decisive battle against invading foreign forces.

Turkey observes the day as it faces another battle targeting its independence according to the country's leadership. Penning a tribute to Mustafa Kemal Atatürk, the founder of Republic of Turkey and commander of the independence war, at his mausoleum in the capital Ankara, President Recep Tayyip Erdoğan said "threats and attacks will not deter us from accomplishing our goals."

The country came a long way from its post-World War I state in ruins but still faces threats from terrorists, ranging from the Gülenist Terror Group (FETÖ) and the PKK to Daesh. Recently, the country has been facing what Ankara described an economic war with the Turkish lira steeply plunging in value.

The last week of August is celebrated as Victory Week in Turkey to honor two key victories by Turkish forces, the Battle of Manzikert on Aug. 26, 1071, when Seljuk Turks defeated the Byzantine army, opening the way for Turkish rule in Anatolia, and the start of the Great Offensive on Aug. 26, 1922, resulting in the Greek defeat at the hands of Turks.

The victory over the Greek military on Aug. 30, 1922 in the Battle of Dumlupınar, in Turkey's Aegean province of Kütahya, was the last large engagement between the two armies in the War of Independence, which began with the Greek invasion of İzmir in May 1919 after the end of World War I, with tacit support from the Allied forces, especially Great Britain.

Following the Greek army's defeat in Dumlupınar, the remainder of the disorganized and battered ranks fled back to the western city of Izmir, applying scorched earth tactics and destroying towns and villages along the 300 kilometer route.

The Turkish army liberated Izmir on Sept. 9, which sealed the defeat of the Greek expedition into Anatolia, and hostilities ended with the Armistice of Mudanya on Oct. 11, 1922.

As part of commemorations, President Erdoğan, joined by dignitaries including Parliamentary Speaker Binali Yıldırım, opposition party leaders, top judges of the Supreme Court and top military brass, first laid a wreath at Anıtkabir, the mausoleum of Atatürk, who oversaw the Great Offensive. He then hosted two receptions at the Beştepe Presidential Complex on the occasion.

"We proudly mark the 96th anniversary of the Great Victory today. It is a golden chapter in our history and is a victory that was the fruit of a legendary struggle under the leadership of the commander-in-chief amid poverty and against impossible odds. The Turkish nation is inspired by the sacrifice of our martyrs, bravery of surviving veterans and its centuries-old values in preserving its independence today as well, at the cost of its life. The recent escalation of threats, violations and attacks against sovereignty of our country will not deter us from pursuing our ideals and ambitions. May your soul be blessed," Erdoğan wrote in the official visitor's memorial book for Atatürk at Anıtkabir.

Share on Facebook Share on Twitter
Previous in Turkey Aestheticstanbul, a symposium bringing together prominent plastic... Next in Turkey As the number of anti-vaccine families that refuse to have their children...
DAILY SABAH RECOMMENDS