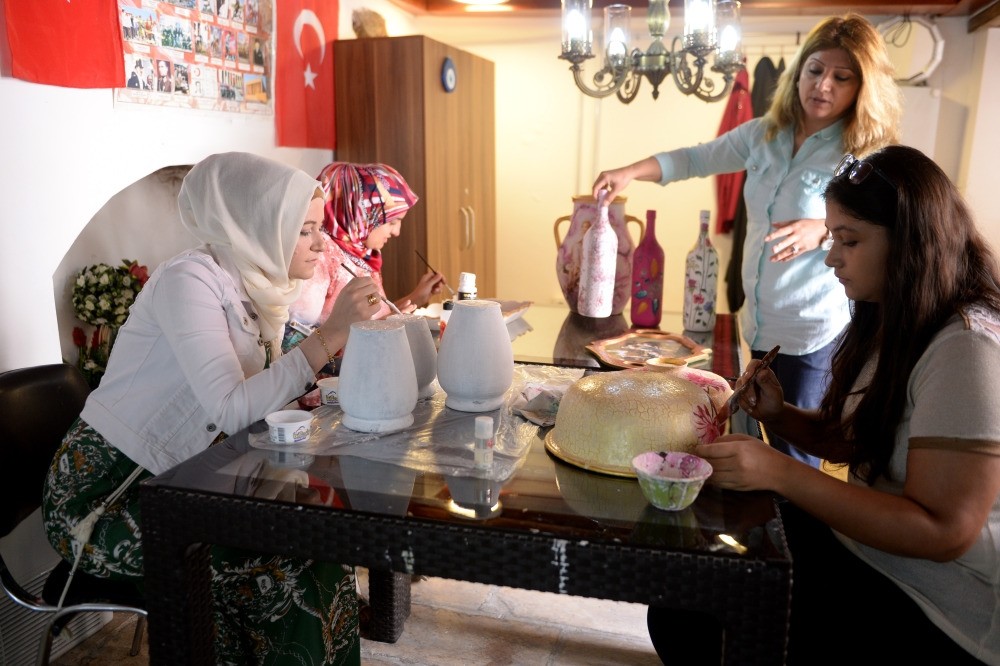 Lifelong learning classes offer a wide array of skills to refugees.
by Daily Sabah Sep 05, 2018 12:00 am

Lifelong learning classes for Syrian refugees in southeastern Turkey's Kilis are helping them socialize, acquire new skills and even make a living.

Kilis is home to one of the largest populations of Syrian refugees in Turkey, in proportion to its own population. It has already earned the reputation of a refugee-friendly city after welcoming refugees who fled the ongoing Syrian civil war.

Sponsored by the local municipality and organized by the Public Education Center, the lifelong learning classes are helping refugees integrate into the society and obtain new skills that help them make some extra money for their families.

Local officials said that the classes are very popular among Syrians, and some 14,000 people have graduated from the program since the first arrival of refugees about seven years ago. Hasan Yiğit, head of the Public Education Center that organizes lifelong learning programs, said that the classes help the participants' "social integration" process. "The two cultures get to know each other," he told Anadolu Agency (AA).

Kilis hosts about 130,000 Syrians, exceeding its original population. The city was nominated for a Nobel Peace Prize a few years ago for its exemplary hospitality toward refugees, who mostly live outside two refugee camps in the city that house about 21,000 refugees. Most of them depend on donations from charities and some turn to illegal labor for income, although Turkey has started a limited work permit scheme for the refugees.

Lifelong learning classes offer lessons on a wide variety of skills, including sewing, knitting, information technologies, housekeeping, cooking, hairdressing and painting. Yiğit said the programs are "a good reference for refugees seeking jobs," and they promote the products the participants manufacture thanks to the skills they learn in the classes, such as handicrafts. "Last year alone, more than 2,000 Syrians participated in our classes," he noted.

New classes will be introduced this month for refugees, including music and sign language, along with a sports training program.

Shaze Hassan, a woman who fled the Syrian conflict seven years ago and settled in Turkey is among the participants of classes. "I learned how to make souvenirs from recycled material. I sell them to help my family," she says.

Cihan Arslan, another Syrian, both learned Turkish and sewing in the classes. "Now, I sew skirts and shirts and sell them. By God's will, I will keep doing this job once I return to Syria," she says.