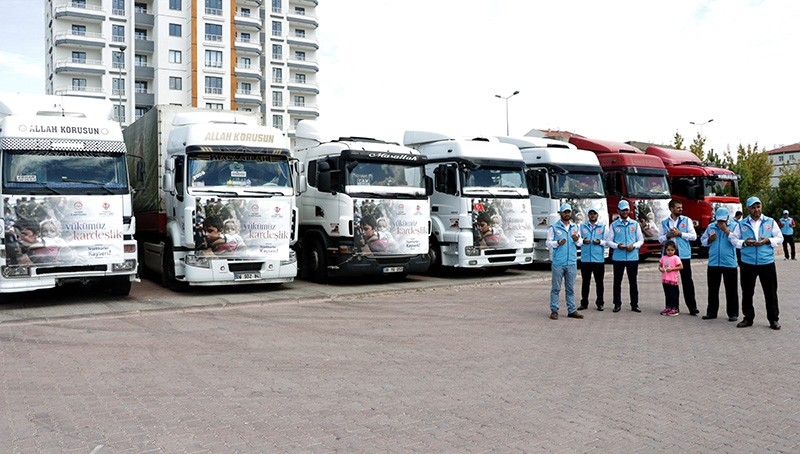 Turkey's Diyanet Foundation sent 10 aid trucks loaded with flour to the Syrian city of Aleppo from central province of Kayseri as part of the "Do Not Let Humanity Die in Aleppo" campaign.

The foundation and the Kayseri Provincial Mufti office held a ceremony today at the Kadir Has Culture and Arts Centre before sending the aid trucks that were made possible with donations.

In his speech at the ceremony, Selim Argun, the Diyanet's assistant director of religious affairs, stated that the Syrian people are going through a massive crisis.

Argun said Turkey has been spurred on to give more aid after statistics in recent years have showed more people in world died from overeating and obesity that from starvation and malnutrition.

In 2017, Turkey was named "as the country that has helped the most in the world" in terms of gross domestic product, Argun said, adding that the country hopes to continue at this pace.

Şahin Güven, mufti of Kayseri, said that all the donations will be given to the Syrians who need help across the border.

President of the IHH Bülent Yıldırım said that the 20-truck aid convoy is part of a campaign that intends to send up to 1,000 trucks of humanitarian.