Neo-Nazis of Germany: Swastika on mosque, NSU convict in the rally 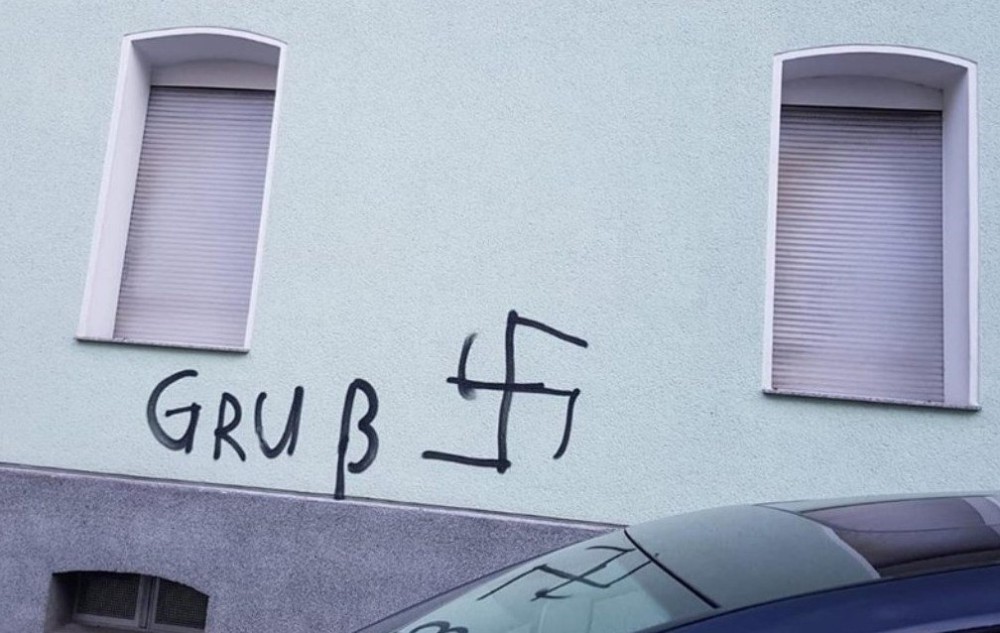 Unknown assailants drew a swastika and a message reading ,not welcome, on the walls of the mosque in Gladbeck.
by Compiled from Wire Services Oct 02, 2018 12:00 am

A lax attitude toward neo-Nazis in Germany help them thrive as evidenced by a racist attack at a Turkish mosque in Gladbeck and photos showing Andre Eminger, a man convicted of aiding NSU, a neo-Nazi gang that killed Turks, at a neo-Nazi rally and concert a month after he walked free

"Such crimes can be prevented if the perpetrators are caught," Nadir Kahraman said Sunday at a Turkish-run mosque in Germany's Gladbeck, hours after a swastika and racist messages were graffitied on its walls.

Perpetrators in similar cases are seldom apprehended and even if they are, they get away with lenient sentences, the Turkish community often complains. The attack on Sunday night comes a day after the Turkish-Islamic Union for Religious Affairs (DİTİB), which runs the Gladbeck mosque, hosted an inauguration ceremony for a large mosque in Germany's Cologne, attended by Turkish President Recep Tayyip Erdoğan, and amid German politicians' criticism of the DİTİB for its links to Turkey.

Turks, one of the largest migrant communities in Germany, are often targeted in racist-motivated attacks, from beatings to arson and a peculiar news report in the German media highlights that the country itself may be encouraging it. A photo published on broadcaster MDR's website apparently shows Andre Eminger, "a good father for his family" as lawyers described in a neo-Nazi trial, attending a neo-Nazi concert in August.

Eminger was among defendants in a controversial trial of the National Socialist Underground (NSU) gang that is accused of killing eight Turks in racially-motivated attacks. He was sentenced to two and a half years in prison when the trial concluded in July but walked free as he already served that time in pre-trial detention. Eminger was accused of aiding and abetting gang members, His release prompted an outcry from the families of victims who saw how a dozen of his supporters applauded the court's order to release him in the courtroom. In its verdict, the court has viewed his role in aiding the gang as "insignificant" though prosecutors sought 12 years in prison for Eminger. The concert he was attending was "a farewell concert" for two men who would start serving their sentence for a neo-Nazi attack in February 2014 in Thuringia. Such concerts are seen as an opportunity for neo-Nazi groups to connect with more sympathizers, experts warn. Speaking to MDR, Stefan Heerdegen from a non-profit against far-right, said Eminger was viewed as a "hero" in the neo-Nazi scene and he has never shown any remorse for being associated with the scene during the course of NSU trial. "So, it is not surprising that he returns to the scene and celebrates with fellow neo-Nazis," Heerdegen said.

Since their arrival in Germany decades ago as "guest workers" during the post-World War II rebuilding period, Turks saw a steep rise in xenophobic attacks, especially in the 1990s. A surge in the flow of migrants, particularly from war-torn Syria, in the past couple of years, helped the rise of the far-right and hence, neo-Nazi extremists, in Germany.

The NSU case was an egregious example of how Germany ignored the threat neo-Nazis posed and how what critics called "institutional racism" helped their crimes to went undetected despite multiple informants with ties to the gang were recruited by intelligence services.

NSU is naturally celebrated with Germany's neo-Nazi scene and as figures by German Interior Ministry shows about 360 crimes were registered after the gang was exposed in 2011, relating to the celebration of NSU, from vandalism targeting memorials for gang's victims to hate speech towards the gang's victims.