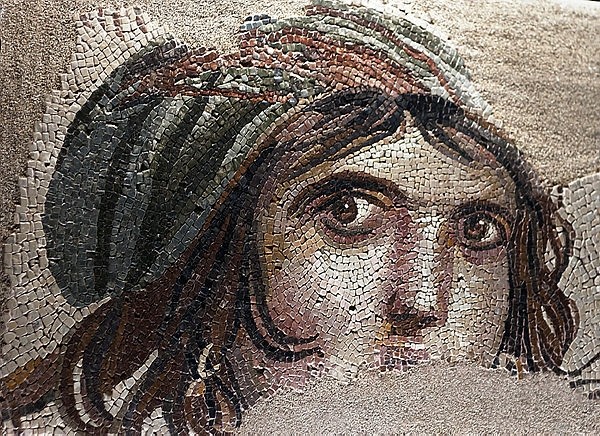 ,Gypsy Girl, mosaic; Akratos, a goddess of the seasons and Earth Goddess of the recovered Satire named Gypsy Girl with traces of mosaic and mother of the gods Gaia or different views on that Alexander the Great. (File Photo)
by Daily Sabah Oct 02, 2018 12:00 am

Twelve stolen pieces of Turkey's world-known Zeugma mosaics will be returning home from the U.S Bowling Green State University to Zeugma Mosaic Museum in Turkey's southeastern province of Gaziantep, after years of attempts to return them to their rightful owners.

The mosaic pieces, extracted decades ago during illegal excavations at the ruins of the ancient city of Zeugma, are set to return home later this month when Gaziantep Mayor Fatma Şahin travels to Ohio to retrieve them.

Various mosaics that were obtained illegally by smugglers, along with the Zeugma pieces, are currently on display at the Wolf Arts Centre in the Bowling Green State University.

Şahin was in New York City with President Recep Tayyip Erdoğan's delegation last week and put the finishing touches on the deal with the university to bring the artifacts home.

At the beginning of last week, Culture Minister Mehmet Nuri Ersoy authorized the Cultural Attaché to Washington Sedat Gönüllüoğlu to initiate work on the return of mosaics.

"Last year, our cultural attaché signed a protocol with the university administration," Şahin told Hürriyet daily, following a letter sent by the Turkish Consulate General of Chicago to Bowling Green State requesting a meeting to discuss the return of the artifacts.

To honor a deal that was made seven months ago, Turkish craftsman will immediately begin to prepare accurate replicas before going to retrieve the mosaics and bring them back home, Şahin said.

The ancient artifacts will be insured before leaving Ohio and will be sponsored by Turkish Airlines, she added.

The pieces were smuggled abroad during illegal excavations in the ruins of Zeugma in the 1960s and were purchased by the U.S. university in 1965 for $35,000 from art dealer Peter Marks.

They were restored and installed under a protective glass in the floor of Wolfe Center for the Arts that was opened in 2012. The same year, the Turkish Foreign Ministry applied to the university for return of the artifacts but Bowling Green State University demanded reimbursement for the purchasing price – $260,000 in 2012 – or for 20 Turkish students per year, totaling 200, to be educated at their institution. Ministry officials declined both proposals, stating ethical objections and subsequent attempts to reach a settlement had failed.

Since 2003, the Ministry of Culture and Tourism has obtained 4,311 artifacts illegally exported from Turkey, currently tracking down another 55 pieces in 17 countries. Many artifacts uncovered in Turkey are displayed in various famous museums throughout the world even if they were illegally smuggled out of the country. Legal procedures to retrieve these artifacts take a long time. Most recently, Turkey retrieved the statue of Heracles from Switzerland.