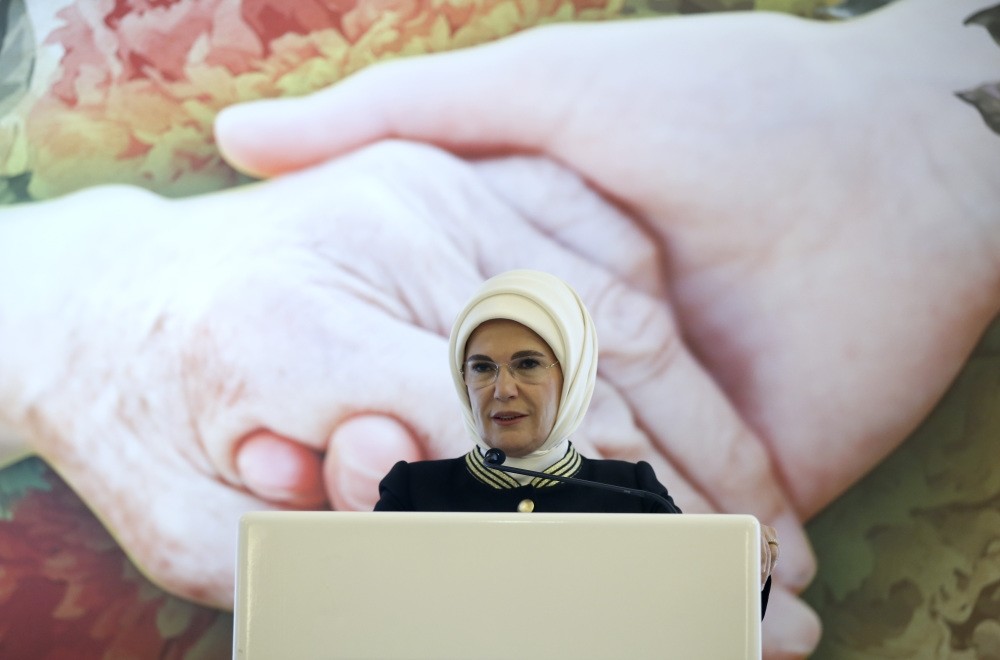 First Lady Emine Erdou011fan delivers a speech ,Rights of the Elderly for Elderly Welfare, conference in Ankara.
by daily sabah
Oct 03, 2018 12:00 am

Facing the prospect of a rapidly aging population, Turkey seeks to invest more in the welfare of its senior citizens. Addressing an event on the rights of senior citizens, first lady Emine Erdoğan urged the nation to embrace its elderly citizens and called for a professional approach to elderly care.

Turkey's elderly population has increased 17 percent in the last five years, according to official figures. There are concerns over projections that the aging rate of the populace will steadily increase in the near future. Official figures released by the state-run Turkish Statistical Institute (TurkStat) show that the elderly population - people 65 and over - increased 17 percent from 2013 to 2017, to a total of 6.8 million.

Speaking at the "Rights of the Elderly for Elderly Welfare" conference organized by several universities and the Ministry of Family, Labor and Social Services, Erdoğan said people should not "distance" the elderly from their daily lives. "It would deprive us of benefiting from their rich experience and in the end, it will be our children who would lose the opportunity to learn from them," she said.

The first lady said capitalist approaches guiding the modern world ignore the elderly, "who have no place in production or consumption" and "ostracize" them, condemning people to loneliness by scaling back extended families. "Aging is viewed as equal to weakness and losing one's value. Whereas, in our culture, aging means a beginning. It equals wisdom. This is why we kiss their hands [in a sign of respect]. They are wise people who have traveled this difficult journey called life, and we have many things to learn from them about life," she said.

Pointing out the increasing life expectancy in Turkey, Erdoğan said the number of citizens 65 and older was expected to double in the world by 2050, adding that social policies should be shaped in accordance with this trend. "In determining [policies] on health services, we have to prioritize services for the elderly population as much as we do for maternal health. Elderly care should be a new discipline, and it must be a profession complying with our culture and values just as childcare became a profession evolved from traditional motherhood," she said.

Erdoğan noted that although the state has invested in raising the standards in elderly care, the ideal situation is "having elderly cared for by their own families." The first lady also called for elder-friendly cities. "Social spaces for the elderly have decreased. Cities should take measures against it and offer the elderly more social facilities," she stated.