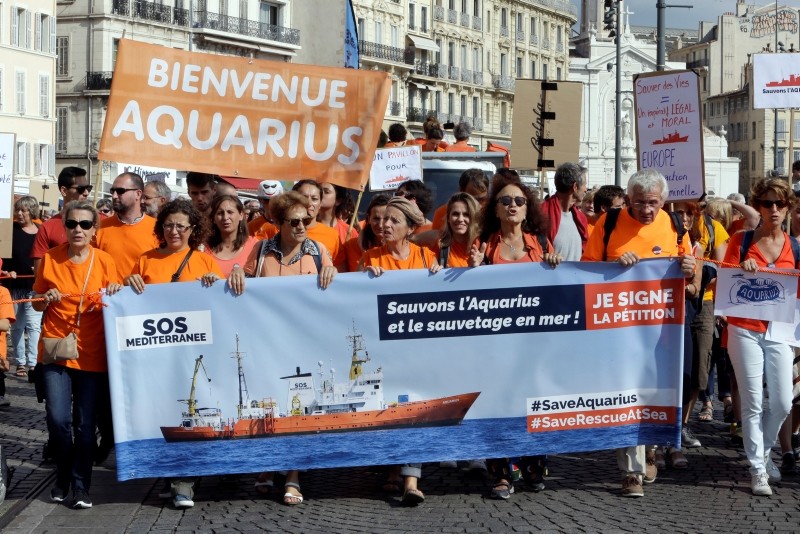 People gather to support the Aquarius ship that rescues migrants operated by the humanitarian group SOS Mediterranee, in the Old-Port of Marseille, southern France, Saturday, Oct. 6, 2018. (AP Photo)
by Compiled from Wire Services
Oct 07, 2018 12:00 am

The president of Turkish Red Crescent on Saturday called for the protection of rescue ship Aquarius as thousands rallied Saturday throughout Europe to protest attempts to block the ship from operating.

The Aquarius, operated by the SOS Mediterranee and Doctors Without Borders (Medecins Sans Frontieres - MSF), saves migrant lives in the Mediterranean Sea. The ship was de-flagged first by Gibraltar and recently Panama, and has been stuck in port in the French city of Marseille ever since.

Dozens of demonstrations were held in France including in Paris, as well as in Brussels, Berlin, Madrid and Palermo.

Many dressed in the boat's orange colors and chanted for "a flag for Aquarius" while slamming the "criminal inaction" of EU governments to resolve the impasse.

Marseille, home to the SOS Mediterranee NGO which operates the vessel with Doctors Without Borders (MSF), saw the largest show of support. Organizers said 10,000 people took part in the demonstration though police put the figure at nearer 3,500.

A similar rally in Paris also drew a crowd of around 10,000, according to the organizers, while police put the figure at a tenth as many.

"The goal is to make an appeal to citizens and show that SOS Mediterranee draws its legitimacy from civil society," said the NGO's spokeswoman Sophie Rahal in Paris.

Turkish Red Crescent President Kerem Kınık, who is also vice president of the International Federation of Red Cross and Red Crescent Societies (IFRC ), said in a statement that Aquarius "may continue its activities under the Turkish ensign."

"We propose that Aquarius resumes its activities with the Turkish ensign. I believe, our country, hosting today more than 4 million refugees will be an important part of a solution to this issue," he said.

"Turkish Red Crescent has taken an initiative to support of Aquarius to continue sailing. A support to save more lives among those fleeing their countries and are at risk of death while crossing the Mediterranean," the statement added.

According to the statement Aquarius has been rescuing migrant lives in the Mediterranean Sea for the last three years.

It has saved 29,523 lives in the Mediterranean, a migration route for those seeking asylum in Europe and SOS Mediterranee President Francis Vallat said "the situation is more critical than ever".

Vallat said although migrant volumes had dropped "we are passing from one death per 42 migrants (at sea) last year to one in 18 migrants" this summer.

Meanwhile, around 100 flouted an official protest ban and gathered in the northern port of Calais -- where authorities in late 2016 dismantled the notorious Jungle refugee camp, which at its height at been home to some 10,000 migrants.

Immigration remains a hot-button issue in the European Union following the 2015 migration crisis.

There are deep divisions among member states over how to handle the continent's biggest influx since World War II.

Saturday saw protesters gather in Riace -- a small hamlet in Italy's deep south which has earned praise for its integration of migrants -- demanding the release of their leftist mayor.

Domenico Lucano was placed under house arrest on Tuesday under suspicion of arranging "marriages of convenience" for immigrants and for allegedly skipping a tender process while awarding a garbage management contract to co-operatives with ties to migrants.

In office since 2004, Lucano has made headlines around the world for welcoming migrants to the sparsely-populated village in Calabria in a bid to boost jobs and development.

"Keep strong, continue fighting," his supporters chanted Saturday as they gathered outside his window from where he raised a fist in support.
Last Update: Oct 07, 2018 6:09 pm