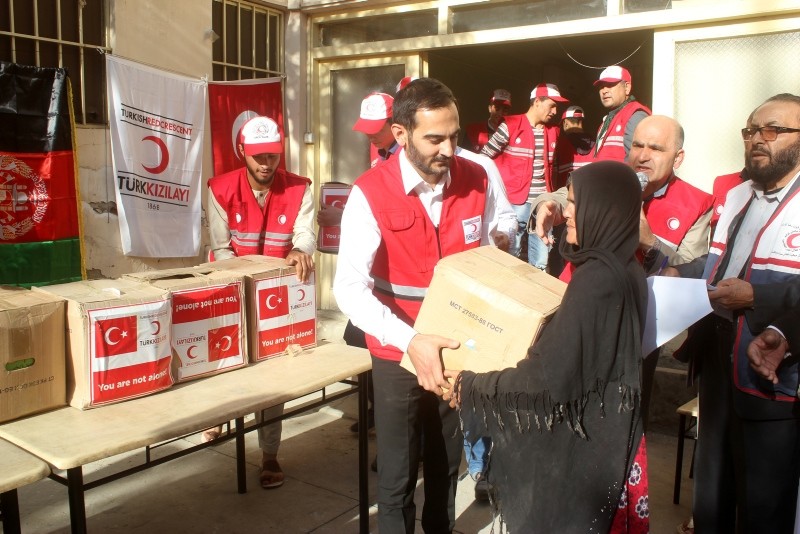 The Turkish Red Crescent has provided 300 war-affected families with a month's supply of food since opening a new office in Afghanistan's capital Kabul.

Altan said the Turkish aid agency opened an office in Kabul to help meet the needs of the Afghan people.

The distribution ceremony was also attended by the Turkish Ambassador in Kabul Oğuzhan Ertuğrul, General Manager of the Ministry of Interior's Directorate General of Migration Management Abdullah Ayaz and other officials from the Turkish government and Turkish Red Crescent.

In addition to providing poverty-alleviating aid, the Turkish Red Crescent has been among first responders to natural disasters – including earthquakes and floods

Earlier this year, the Turkish Red Crescent sent 500 food packages and toys to Afghanistan to be distributed by Turkish soldiers to those in need.

Afghanistan's poverty rate and food insecurity have increased sharply over the past five years as the spreading Taliban insurgency has stalled the economy, with 55 percent of the population living on less than a dollar a day, the Afghanistan Living Conditions Survey (ALCS) said in May.

Prevailing drought conditions are affecting around 1.9 million people in 20 different provinces, according to the International Federation of Red Cross and Red Crescent Societies (IFRC), increasing the need for food security, water, sanitation and emergency shelter.