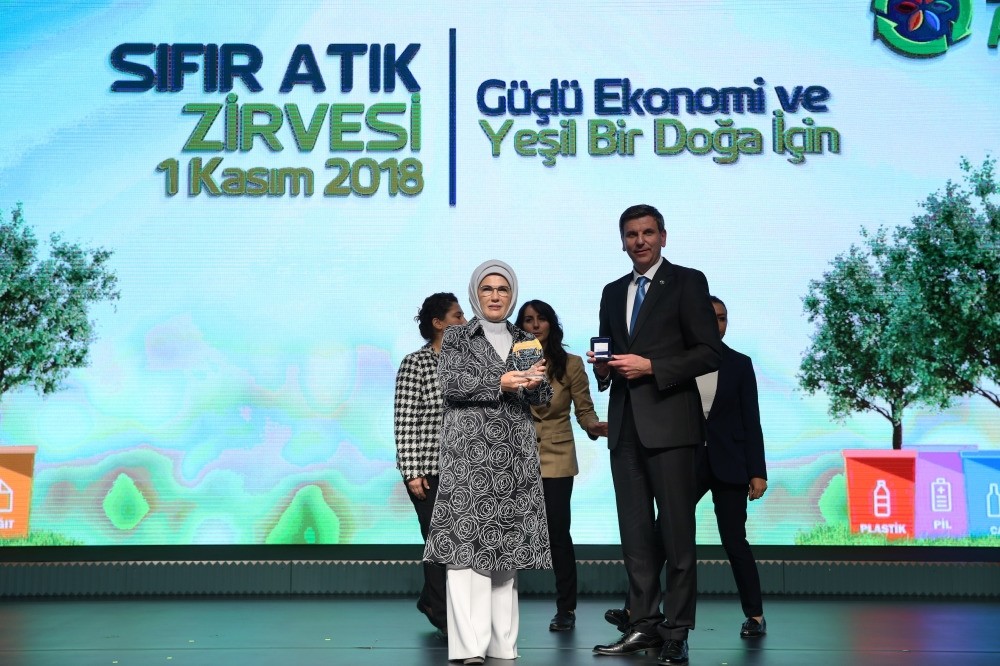 The ‘Zero Waste' project, championed by first lady Emine Erdoğan, has made waves across Turkey in the year following its launch. The project is meant to reduce garbage not recycled. Speaking at a summit she hosted yesterday on the issue, Erdoğan called for more public awareness on zero waste ‘that will make the environment more livable and the economy stronger'

One year after it was launched, the Zero Waste project inaugurated by first lady Emine Erdoğan was evaluated at a summit in the presidential complex in the capital Ankara yesterday. A project to promote recycling, Zero Waste was first applied in the complex as well as ministries and spread to municipalities all across Turkey. In a speech at the summit, Emine Erdoğan hailed the progress made and called for more public awareness on the issue.

The project involves saving everything from paper to discarded metals for future use or for recycling. From ministries to small town restaurants with their own recycling practices, the campaign took hold in one year.

The first lady said in her speech yesterday that the Zero Waste project was necessitated by a need to "redesign our lifestyle" due to climate change. "We need to revise our culture of consumption. Otherwise, there will be irreversible damage to nature, lives of its inhabitants, as well as to prosperity and economy of societies. The world needs to focus on use of renewable energy," she said. "We aim for a more livable environment and a stronger economy by classifying the waste at its source and recycling it," she added.

"I am pleased to announce that we have not had garbage trucks at the presidential complex for a long time. Our personnel are trained and we have set up a system to maximize recycling of waste at the complex. For instance, we use compost for landscaping and I believe this system will be in use in all public buildings soon," she said. Erdoğan hailed support from the public and said companies, universities etc., had started setting their own systems for recycling. "Now, we need municipalities [to be up] for a larger task of waste-sorting and recycling just like our citizens at home.

Municipalities should abandon uncontrolled waste storage practices or burning the waste and all cities should have facilities turning waste into energy or compost," she said. Giving the example of Kamikatsu, a town in Japan that is dubbed as the world's zero waste town as 80 percent of waste is recycled there, Erdoğan said the secret of the town's success was that "everyone helped in this mobilization to reduce waste."

"They devised as many as 45 categories in sorting waste and they even removed stickers from plastic bottles and sorted them separately. So, individual participation will be a turning point in this campaign," the first lady added.

"You can set up a system but it won't work if you cannot change the behavior of people. Human factor is important. We would fail if people were not willing to participate," Emine Erdoğan said in her speech. "Personal demands and rejections shape our life. For example, choosing canvas bags instead of plastic bags is a small step but helps us to preserve more trees and water sources," she said.

Environment and Urbanization Minister Murat Kurum said at the summit that more municipalities would switch to recycling by the end of 2019 and they also work to curb the use of plastic bags. "Starting next January, consumers will be obliged to pay for plastic bags while shopping. Use of plastic bags per person is currently 440 and we aim to decrease it to 90 or less by the end of next year," he said. He said that their aim was to bring the recycling rate to 35 within the next five years. "This also means a TL 20 billion [$3.58 billion] saving for our economy," he added.

The summit concluded with awards to companies and nongovernmental organizations active in recycling campaigns and practicing it successfully, including Turkish Airlines, Boğaziçi University and public broadcaster TRT. First lady Erdoğan herself was presented with the "Zero Waste, Zero Hunger" award by the Turkey office of the United Nations Food and Agriculture Organization (FAO) for her project.