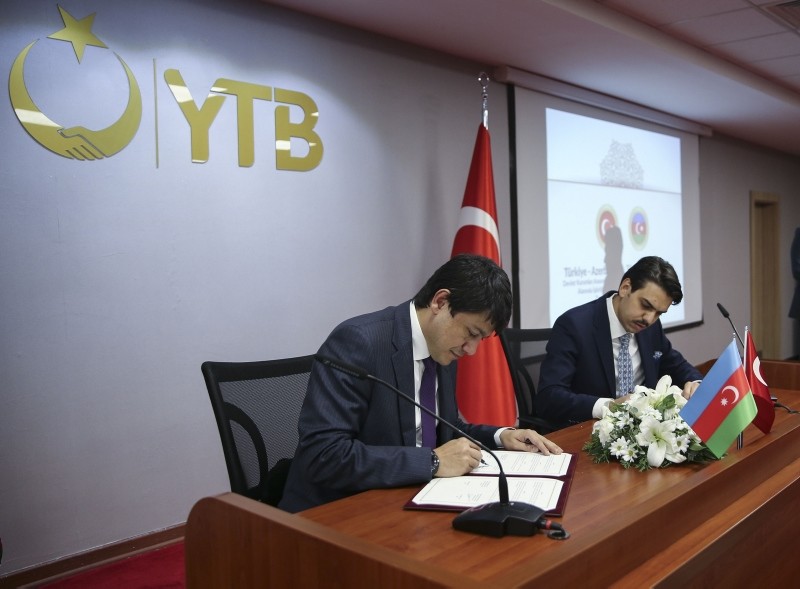 Turkey's Presidency for Turks Abroad and Related Communities (YTB) signed memorandums of understanding with Azerbaijan and Kazakhstan on diaspora policies on Thursday.

The MoUs were signed with the Azerbaijan State Committee on Affairs with Diaspora and the Kazakhstan Citizens Foundation.

Speaking at the signing ceremony at the YTB headquarters in the capital Ankara, YTB President Abdullah Eren said Turkey always included brotherly nations in its definition of diaspora and that cooperation under cultural similarities yielded better results.

Eren said the Türkiye Scholarships program provides the opportunity to educate 17,775 scholarship recipients from 150 countries in the best universities of Turkey.

A cooperation protocol between Turkey's Yunus Emre Institute and Kazakhstan Citizens Foundation was also signed during the event.

Following the memorandums, a joint plan of action for 2018-19 was accepted by member ministers and authorities of the Cooperation Council of Turkic Speaking States (Turkic Council).

In accordance with the plan, the second Turkic Council Diaspora Forum, scheduled for next year, will be hosted by Turkey.

Members of the Turkish, Azerbaijani, Kazakh, and Kyrgyz diaspora communities will discuss political, legal and commercial issues as well as those regarding civil society and human rights at the forum.

The meeting, which took place in the Presidential Palace in Ankara, was closed to the press.

The YTB, which was established on April 6, 2010, coordinates activities and develops services for Turks living abroad, related communities and the Türkiye Scholarships program. Along with efforts of the Presidency, the YTB strives to strengthen relations with citizens living abroad and with sister communities, and to establish closer economic, social and cultural relations.

The Turkic Council was established in 2009 as an international intergovernmental organization, with the overarching aim of promoting comprehensive cooperation among Turkic-speaking states.