Turkey aims to have more Syrians in the workforce 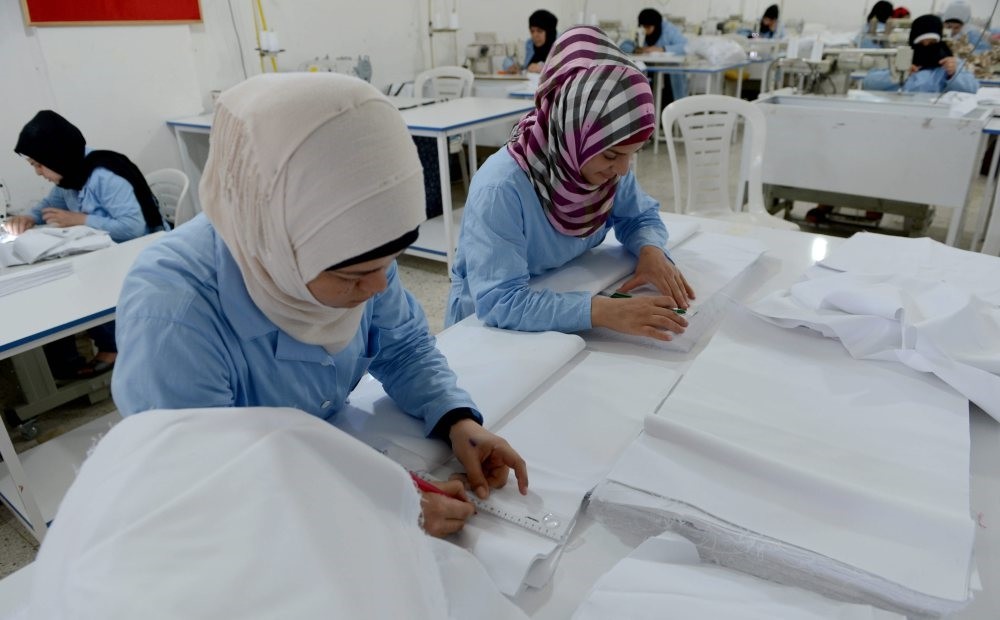 Syrian women working in a textile workshop in the city of Kilis.
by Compiled from Wire Services Nov 16, 2018 12:00 am

The government started setting up a database of job profiles of Syrian refugees, aiming to improve the lives of millions who arrived in Turkey from war-torn Syria with little to no money and seek to make a living on their own rather than depending on aid

The civil war in Syria marked its seventh year in 2018 with little prospect of ending any time soon. Turkey, as the host of the largest Syrian refugee community at more than 3.5 million, strives to help the refugees with regular humanitarian aid while looking for ways to secure a future for them in Turkey. Saadettin Akyıl, the head of the international workforce department of the Ministry of Family, Labor and Social Services, said they are collecting occupational profiles of Syrians to see "who wants to work" and what their qualifications are.

Speaking at a conference on integration of Syrians in the workforce, Akyıl said they worked for refugees' access to the workforce and live without dependence on others. "We work with the [state-run] employment agency and other ministries to examine the occupations and skills of Syrians. We examine how they approach being employed. There are 2 million among them of working age. Certainly, all cannot enter the workforce, but we want to include about 900,000 of them in the workforce," he said, adding that they worked on a 10-year projection about how their employment will be possible.

Despite being commonly referred to as refugees, legally the Syrians are under temporary protection in Turkey, which requires new laws to regulate their integration process. These regulations are mostly established through permits, such as work permits. In 2014, refugees got the right to work legally in Turkey; however, work permit regulations for refugees under temporary protection was only finalized in 2016, giving refugees the ability to apply for work permits personally. Only 20,000 work permits have been granted so far, which is a quite low number compared to the total number of Syrians in the country. A number of Syrians also work without permits though exact data is not available on their number. Along with the government, Syrian businessmen provide employment for their compatriots. Investment by Syrian businessmen thrived in recent years and figures by the Istanbul-based Economists' Platform shows businessmen invested more than $360 million in Turkey. The report by the platform says almost 800 new companies were founded with Syrian partnerships by 2016 and that figure hit approximately 1,000 in the first six months of 2017, the latest year for which the data is available.

As the war has dragged on, Turkey shifted its policy towards refugees from simple protection and humanitarian aid to integration as only a small fraction of the overall refugee population stays in state-run camps near the border with Syria, while the rest are spread out across Turkey. Women and children make up the majority of refugees, and many refugee families depend on fathers and elder sons for income. Education is a key part of the integration of refugees as 1 million of these refugees are children of school age. Turkey granted access to public schools in 2014 for refugees, and despite a language barrier and a different curriculum, Turkish language classes, remedial courses, counseling etc. helped more Syrians to enroll in Turkish schools. As of 2018, some 611,418 Syrian children are enrolled in Turkish schools, which equals 63 percent of the school-aged population.