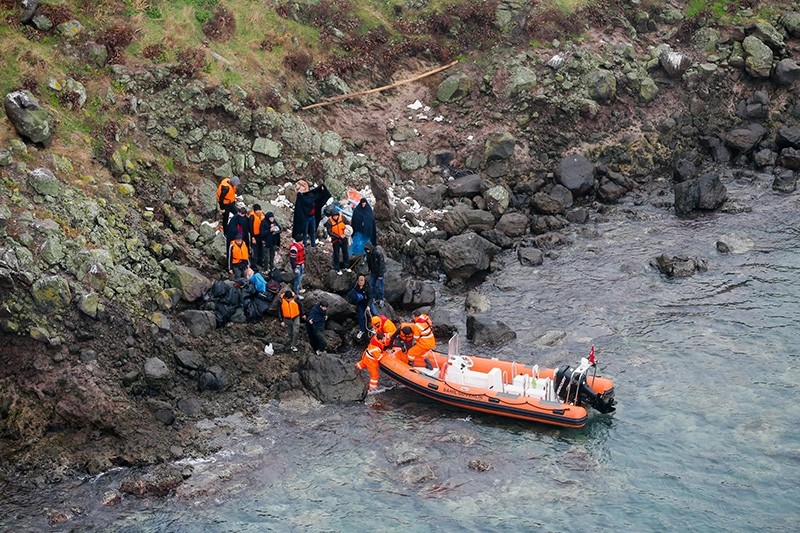 Forty-four illegal migrants who took shelter in a small, rocky island off Turkey's Aegean Coast when their boat malfunctioned, were rescued by the Turkish Coast Guard on Monday.

The migrants, whose nationalities were not disclosed, were heading to the Greek island of Lesbos from Ayvalık, a coastal town in the western Turkish province of Balıkesir. The search and rescue operation was launched after one of the migrants called an emergency hotline from Yumurta island where they were stranded. Boats and two helicopters helped to evacuate the migrants, which included 13 children.

The migrants were taken to the shore where they were given dry clothes and food. Sakina, an Afghan woman who gave only her first name, was among the rescued migrants, told reporters that they were trying to reach Europe via Greece. She said the rubber boat's engine broke down en route to the Greek island and strong winds in the area hurled them to sea. "[Yumurta] island was near and we managed to swim. We did not eat anything for hours," she said.

Turkey has been a main route for irregular migrants trying to cross into Europe, especially since 2011 when the Syrian civil war began.

Turkey's seas, particularly the Aegean in the west, have seen a large influx recently with more migrants boarding dinghies to reach Europe. They travel in overcrowded and unsafe boats to reach Greek islands scattered across the Aegean and only a few kilometers away from Turkish shores. Deaths are common in crossings as many migrants, despite paying thousands of dollars to smugglers, are forced to travel in rubber boats crowded far beyond capacity.

Numbers provided by Turkish Coast Guard Directorate shows 20,320 illegal migrants – formally referred to as irregular – were intercepted in the Aegean Sea which Bodrum is situated on, between January and Oct. 22. Fifty-six people perished in the same period after their boats sank. Security forces also captured 42 smugglers between January and October 2018.

In March 2016, the EU and Turkey reached an agreement to stop irregular migration through the Aegean Sea, and improve the conditions of more than 3 million Syrian refugees in Turkey. An exchange program that would return migrants that previously entered Europe to Turkey and settle Syrian refugees in EU countries failed to curb the migrant flow, as the high number of illegal migrants intercepted by Turkey indicates.