Istanbul summit seeks to empower family in age of self 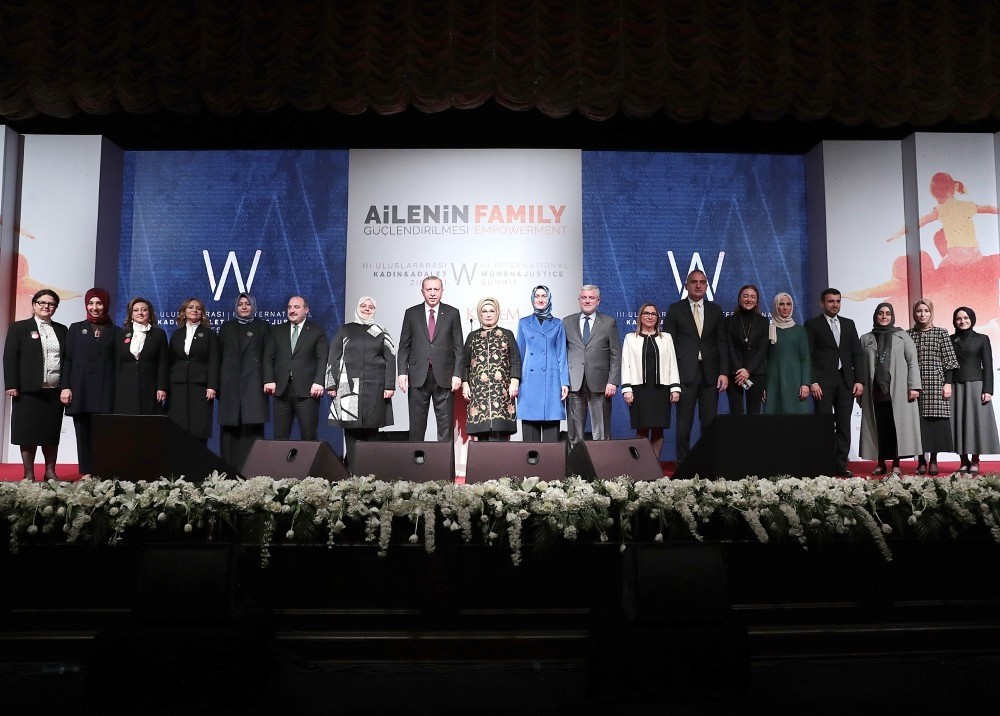 President Recep Tayyip Erdou011fan and first lady Emine Erdou011fan pose with participants and organizers at the summit.
by Daily Sabah Nov 24, 2018 12:00 am

Family empowerment was the main theme of a major international summit held in Istanbul by the prominent nonprofit Women and Democracy Association (KADEM). The two-day Women and Justice Summit brought together academics, experts, activists and government officials who discussed how to tackle challenges to the concept of family in the modern world and how to empower it.

Organizers say that the weakening of familial bonds also spreads to individuals in society and unhappy families that lack love, respect and are in turmoil cause the emergence of an unhealthy psychological and sociological order. The summit aims to draw attention to these issues and help shape policies for family structures based on strong relationships and connections. Held one day before the International Day for the Elimination of Violence against Women, the summit also tackles domestic violence as a threat to family unions.

A large number of participants from various countries, ranging from political actors to women entrepreneurs, academics, journalists, activists and civil society representatives, discussed a wide range of issues at the summit. Topics included the impact of conflicts and poverty on families, a better work-family balance and the crucial role of family structure in the context of globalization. Among the speakers of the summit was professor Gunhild O. Hagestad of the Agder University College of Norway, the Director of Women's Affairs at Dar al-Hijrah Islamic Center of Palestine, Ieasha Prime, Jordanian lawmaker Wafa Bani Mustapha, professor Zaleha Kamuruddin, rector of International Islamic University Malaysia, Bosnian theologian and psychotherapist Sabiha Husic and Dr. Deisi Kusztra Weber, president of Brazil's World Family Organization. Academics including assistant professor Şule Albayrak and professor Huriye Martı, who serves as the first female vice president of Turkey's Directorate of Religious Affairs, were among the Turkish academics who participated in the summit as moderators and speakers.

In an opening speech at the summit, President Recep Tayyip Erdoğan touched both upon women's issues and family empowerment. "Women are inseparable parts and a driving force of the family and in our faith and culture, family is a unit that manifests itself in joint responsibility of a man and a woman. Family does not mean a strict separation of tasks, like women doing household chores and men earn a living to take care of the family. Both contribute to the family, and a view barring women from work life and men from family life by putting boundaries is a devastating concept for families," Erdoğan said. "Human beings, regardless of their gender, have responsibilities and we are members of a faith that disregards differences between people and bars us from discriminating against women," he said. Erdoğan stressed that the West should not be a reference in addressing Turkey's shortcomings when it comes to women's issues. "This is the mindset that objectified women in the past in the hollowest form of objectification and a mindset that nowadays makes women a tool of their objectification in the guise of equality," the president said, while acknowledging "deviation" from solutions to women's issues in the past two centuries in Turkey. "Our country made mistakes too in the past, and we are disturbed that women were used as a symbol for decades in ideological conflicts," he said, adding that: "Those who could not explicitly express their hostility toward our values and culture took their hatred out on our women." Erdoğan was referring to the hostility aimed at headscarf-wearing women in the past. "Turkey lost energy and time with debates [on wearing a headscarf]. Instead of helping girls join social, business and political life and education, they tried to ostracize them from the public sphere with the excuse of headscarves," the president said, in reference to a long-standing headscarf ban that was the work of the secular elite that ran the country up until the early 2000s. "They got their response, and Turkey today left those days behind and is advanced in terms of giving political, social and economic rights to women," he said. The president cited the government's support programs for women, initiatives for girls' education and care services for elderly citizens. "I believe it is right to call support programs for women support programs for families as women are the first affected by any problems in the family," he said.