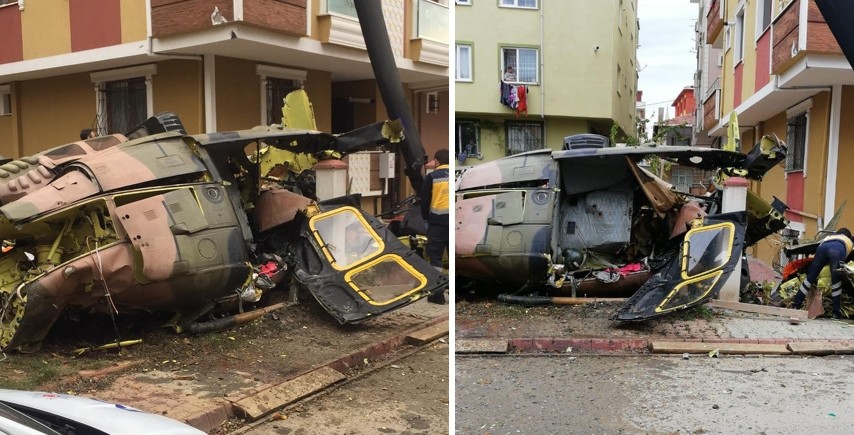 Four soldiers were killed and another was wounded after a military helicopter crashed in a residential area in Istanbul's Sancaktepe district on Monday.

The Bell UH-1 helicopter crashed onto a street between apartments in the Asian district of Sancaktepe, where a military base is situated, after colliding with the roof a building.

Images of the wreckage in an empty yard between buildings showed that a potential disaster was diverted thanks to the heroics of the pilots.

"A military helicopter crashed in Samandıra district while performing a training flight. Four soldiers were killed and another was injured," Istanbul Governor Ali Yerlikaya said.

Yerlikaya arrived on the scene of the crash along with National Defense Minister Hulusi Akar.

Akar told reporters that the flight took off at 10:32 a.m. from the base but lost contact with the base around 11:02 a.m.

"The crash happened at that time and we have four martyrs. We have a sergeant who is in intensive care unit now," Akar said while examining the scene of the crash.

He said pilots sought an emergency landing for a yet unknown reason.

"Obviously, these heroic officers exerted great effort to make the landing without hurting anyone on the ground," Akar said, adding that helicopter was trying to reach the helipad at the base when it crashed.

He said an administrative and criminal inquiry into the crash was launched.

President Recep Tayyip Erdoğan offered his condolences for the deceased soldiers and wished the injured a speedy recovery during a speech at a symposium.

Another witness said his house near the crash site "shook" when the helicopter crashed.

This is the fifth helicopter crash in Istanbul in the past two decades. All of the other crashes were police or civilian helicopters.

A businessman was killed and his pilot was injured when a Bell-430 helicopter crashed off Maltepe coast of Istanbul on Sept. 6 in the latest accident before this. The deadliest crash was in 2017 when a Sikorsky helicopter carrying business executives hit a TV tower in the city's Büyükçekmece district in March 2017, killing all seven people aboard.

Four UH-1 helicopters have crashed in Turkey between 2002 and 2011. Ten officers were killed in total in two UH-1 crashes in the northern province of Erzincan in 2006 and in capital Ankara in 2011.

UH-1 helicopters, whose production ended in 1976, are widely used by armies around the world and they are mainly employed for training, rescue and transportation purposes.