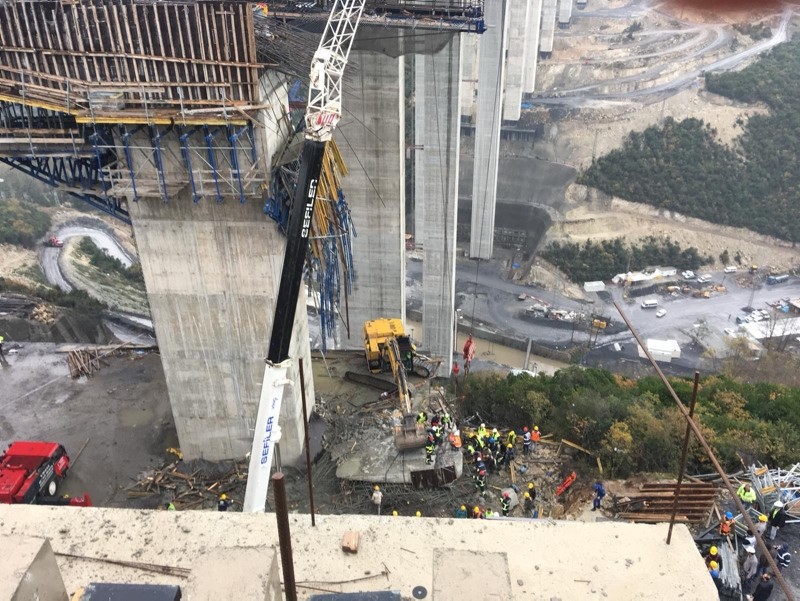 A giant concrete block fell onto workers during construction of a viaduct for a highway in Gebze district of Turkey's northwestern Kocaeli province, trapping at least four workers and killing three of them. One worker was rescued alive with injuries.

The incident took place near the Tavşanlı village, where a viaduct is under construction for the Northern Marmara Highway.

The concrete block to be placed 30 meters above the ground collapsed with five workers on top who were working on its installment, according to initial information.

Kocaeli Governor Hüseyin Aksoy told Anadolu Agency that four workers might have been trapped under the block and efforts are underway to reach them.

Ihlas News Agency reported that the bodies of two workers were retrieved from the rubble. One worker was rescued alive with injuries. A third body was later recovered.

Gebze Mayor Adnan Köşker previously told Anadolu Agency that the voices of the workers could be heard by search and rescue teams and they could hopefully rescue them without harm.

The Northern Marmara Highway project spans from Akyazı district in northwestern Sakarya province to Istanbul's westernmost Silivri district. The highway crosses the Bosporus over the Yavuz Sultan Selim Bridge inaugurated in August 2016, although the bridge and its connecting roads were tendered as a different project.