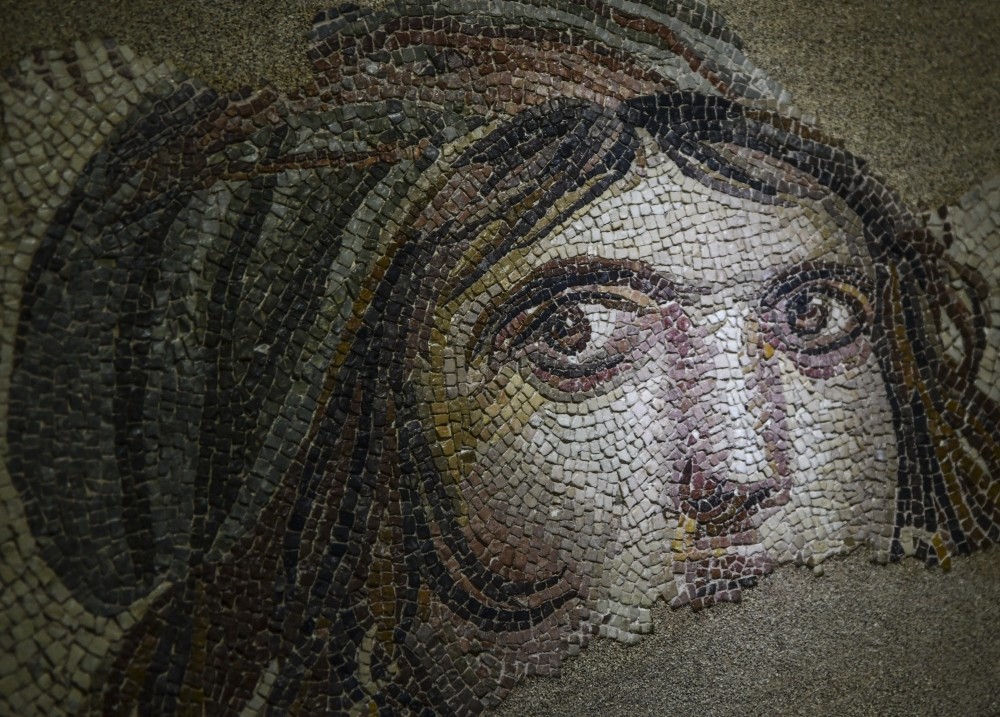 The Gypsy Girl mosaic is a symbol of Gaziantep and one of the most famous artifacts discovered in Turkey.
by Compiled from Wire Services Nov 28, 2018 12:00 am

Turkey has been successful yet again in its pursuit of artifacts smuggled abroad. The pieces of the famous ‘Gypsy Girl' mosaic from southern Turkey's Gaziantep were returned to Turkey from a university in Ohio where they were on display for decades after being smuggled out of the country

Twelve stolen pieces of the Zeugma mosaics, one of the most famous artifacts unearthed in the southern Turkish province of Gaziantep, arrived in Turkey aboard a Turkish Airlines (THY) flight yesterday. The return of artifacts will restore the mosaic, publicly known as the "Gypsy Girl," to its former glory.

Bowling Green State University in Ohio, U.S. has agreed to return the pieces decades after they ended up in its possession after unknown smugglers took the pieces out of Turkey. They will be placed in Gaziantep's Zeugma Mosaic Museum, named after the ancient city where the mosaic was discovered.

The pieces were on display at the Wolfe Center for The Arts at the university. They were handed to Turkish officials earlier this month at a formal ceremony, a year after Gaziantep municipality and Ministry of Culture and Tourism started negotiating their return with university officials.

The municipality agreed to give replicas of the pieces to the university as part of the deal. The pieces will be temporarily on display in a separate part of the mosaic museum in Gaziantep before restorers will merge them with the original piece later.

The mosaic pieces were smuggled in the 1960s, a time where smuggling from excavations was not tightly monitored. It was purchased by Bowling Green University in 1965. They were on display at the entrance of Wolfe Center for the Arts under a glass panel on the floor.

The Gypsy Girl mosaic - named such as the figure resembles one though debate on her (or his) exact identity is not settled yet - was discovered in 1998 in Zeugma which is located in Gaziantep's Nizip district.

A research found out that its missing pieces were smuggled decades ago. Zeugma is home to Roman houses, believed to belong to nobles, dating back to the 2nd and 3rd centuries B.C. Most were adorned with beautiful mosaics currently on display at the mosaic museum.

Turkish archaeologists say that the upper and central part of the mosaic, the only parts not smuggled, was under a broken column found in the ruins, apparently undetected by smugglers. The mosaic was on the floor of a dining room of a Roman villa and captivated many visitors for its bright depiction of wide-eyed "Gypsy Girl" with disheveled hair and earrings. Since its discovery, it became a symbol of Gaziantep, a city bordering with Syria which has been more famous for its traditional baklava dessert and rich cuisine before.

Stephanie Langin-Hooper, an art historian at Southern Methodist University, is credited for discovering the link between the pieces on display at the Ohio University and ancient city of Zeugma. Her research in 2012 helped Turkey to reclaim its ownership of pieces, which were sold to Bowling Green University for $35,000.

Since 2003, the Ministry of Culture and Tourism has obtained 4,311 artifacts illegally exported from Turkey and is currently tracking down another 55 pieces in 17 countries.

Many artifacts uncovered in Turkey are displayed in various famous museums throughout the world even though they were illegally smuggled out of the country. Legal procedures to retrieve these artifacts take a long time. Most recently, Turkey retrieved the statue of Heracles from Switzerland.