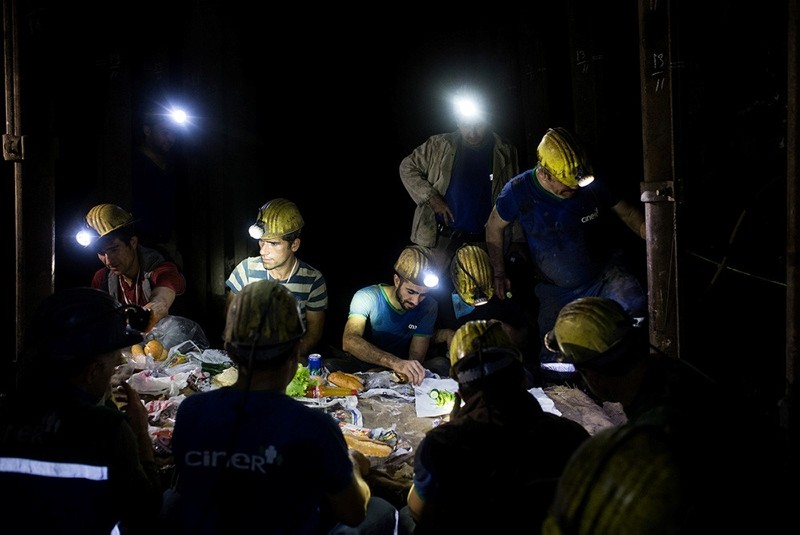 International Miners Days was marked in Turkey on Tuesday with remarks from various prominent figures across the country.

"We are aware of the importance of our miners," Energy Minister Fatih Dönmez said, underscoring that mining was one of the most difficult professions in the world as he celebrated Miners Day.

"As we aim for world class production and work safety, I wish all our miner brothers a happy Miners Day and extend my gratitude," Sönmez said.

"We celebrate the day honoring those who descend into the ground to work for their family and country," Ruling Justice and Development Party (AK Party) deputy Mehmet Muş said.

In 2014, in the western town of Soma, 301 coal miners were killed after a fire broke out inside a mine shaft and they were trapped with no chance of escaping.

Zonguldak Kömürspor (Coalsport) came onto the pitch also wearing yellow miner helmets to their training session in preparation for their next match.

Musicians began celebrations for Miner's Day, dedicated to Catholic Saint Barbara, with a traditional sunrise concert in the streets of a historic district in Katowice.

The performers, dressed in black uniforms with red plumed hats, marched to church for a mass in honor of the patron saint, who they believe watches over miners as they toil underground.

Katowice has been a center of coal mining for more than a century and its culture is closely intertwined with the industry that is largely blamed for global warming. Many mines have closed in the Silesia region in recent years due to financial pressure and the drive for climate protection.

Scientists say the use of coal, one of the most polluting fossil fuels, needs to be radically reduced by the middle of the century to curb global warming.

But not all residents agree that coal is the main culprit. Klaudiusz Jania, the miners' band conductor, said he believed that the main problem was people burning waste in their homes to save money.

He says climate conferences are important but believes that the once-industrial region has done a lot to improve its environment.

"The amount of effort that has been put into improving the air, I think residents of Katowice, its authorities and the authorities of all Upper Silesia should be given a gold medal," Jania said.