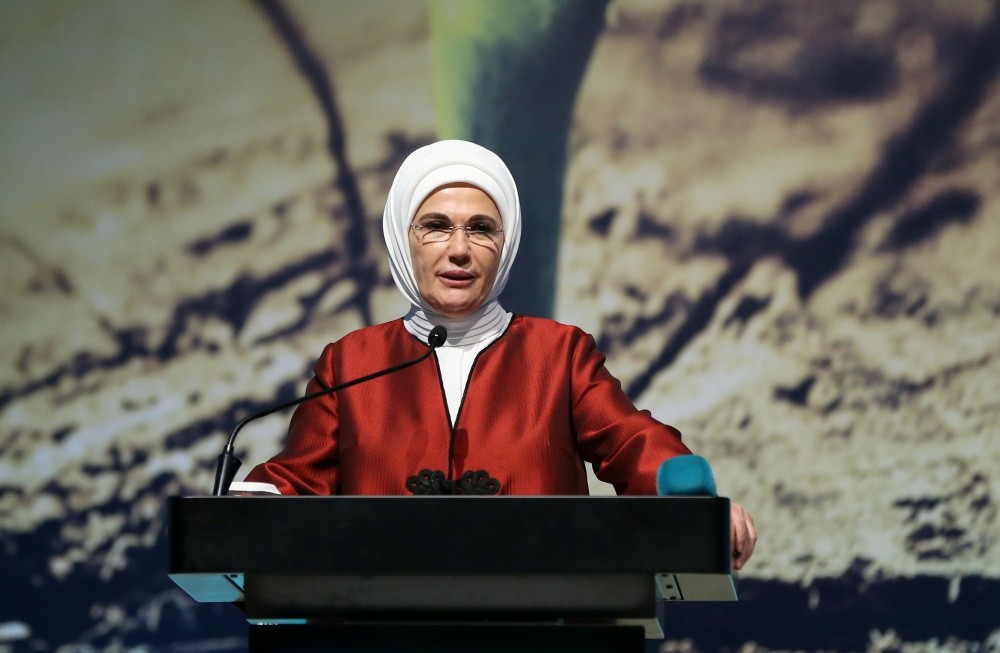 Addressing an international summit on the environment in Istanbul on Friday, first lady Emine Erdoğan called for a change in consumption habits to reduce waste in the fight against environmental pollution

First lady Emine Erdoğan, known for championing a zero waste campaign, spoke at the Istanbul International Environment Summit on Friday and called for changing consumption culture in the fight against plastic pollutants.

"Rapid urbanization and changing consumption habits bring along with them a great deal of negative impact on the environment. Consumption, unfortunately, has been the determining factor in the state of our world today. The economy is driven by steady consumption and sectors focus on products with short lives," she said.

Erdoğan said, "This is a deliberate act that in a way and elevates purchasing something to almost a ritual. We are facing an economy and a marketing sector that depends on supplying spiritual satisfaction through purchases and feeding ego with consumer goods."

People who become happier when they return from shopping with more bags of goods than they needed feed this cycle. Unfortunately, the goods have become the masters of modern humans. This mindset of consumption remains a major challenge in resolving environmental crisis," she added. "We need a wholesome approach to this issue. Changing consumption habits contributes to a change in the composition of waste. Packaging makes up the majority of the waste. Unfortunately, the world has turned into a haven for plastic. The amount of plastic manufactured globally in 2015 was 7.8 billion tons. Today, there is more than 1 ton of plastic per person and uncontrolled waste dumped mixing with water pollute our lives. In China, the largest plastic producer in the world, 330,000 tons of plastic mix with the world's water bodies every year from only one estuary. Plastic is also the main enemy of biodiversity," she added.

Erdoğan said individuals would play an important role in environmental protection. "Joint efforts of public institutions and scientific circles in fighting pollution is very important, but individuals should also be included in this area of responsibility. If we do not reject this consumption culture, we will be the main actors in this environmental crisis. The key to leaving a sustainable lifestyle for future generations is changing our personal habits. One should know the impact of the plastic bottles he or she hurled into sea. One should be aware that ditching plastic bags while shopping helps environmental protection. Our choices can force sectors to be environmentally friendly." The first lady said this was why they launched the zero waste project last year. A project to promote recycling, Zero Waste, was first applied in the presidential complex as well as ministries and spread to municipalities across Turkey. The project involves saving everything from paper to discarded metals for future use or for recycling. From ministries to small-town restaurants with their own recycling practices, the campaign took hold in one year.

Erdoğan said she was pleased to see a nationwide mobilization on waste management.

She also touched upon an environmentally friendly hajj, an annual pilgrimage in Saudi Arabia for all Muslims. "We, as Muslims, are careful to fulfill our religious duty in the best way, but are we careful enough not to harm the environment while we are performing hajj? We should leave the least possible carbon footprints while performing hajj and if we can't; we should plant trees as many as the harm we've done to the environment while performing hajj," she said, referring to criticized images of plastic and other waste casually dumped at or near sacred sites in Mecca and Medina where millions of Muslims from across the globe visit for the once-in-a-year pilgrimage.

The Istanbul International Environment Summit, which kicked off on Thursday and will conclude on Saturday, is held under the theme of "Transformation for a Livable Environment." Held by the Istanbul municipality, it brings together public institutions and organizations, nongovernmental organizations (NGOs), industrialists, urban planners, academics and related sector representatives. Participants discuss environmental action plans, waste recovery, waste energy generation, global climate change, environmental visions of governments and cities, conservation of biodiversity, coastal cleaning, environmentally friendly solutions and future perspectives in workshops and panels.

An exhibition accompanying the summit showcases projects for environmental protection as well as souvenirs made of recycled material, electric garbage disposal vehicles and so forth.

Speaking at a Friday session on climate change at the summit, Turkish climate scientist professor Ömer Lütfi Şen warned about the effects of climate change on Istanbul. "Projections show there will be up to 30 million inhabitants in the city in 2050. Population increase means more demand for food, water and energy and expansion of urbanization. More urbanization means the formation of urban islands that contribute to increasing temperatures in the cities. Istanbul is being affected both by global climate change and urbanization," he said. Şen said Istanbul will be warmer, especially in summers, in the future and will also see heavier rainfall. "Population increase accompanied by climate change makes the city more fragile," he warned, calling for improving urban planning to better distribute the population.