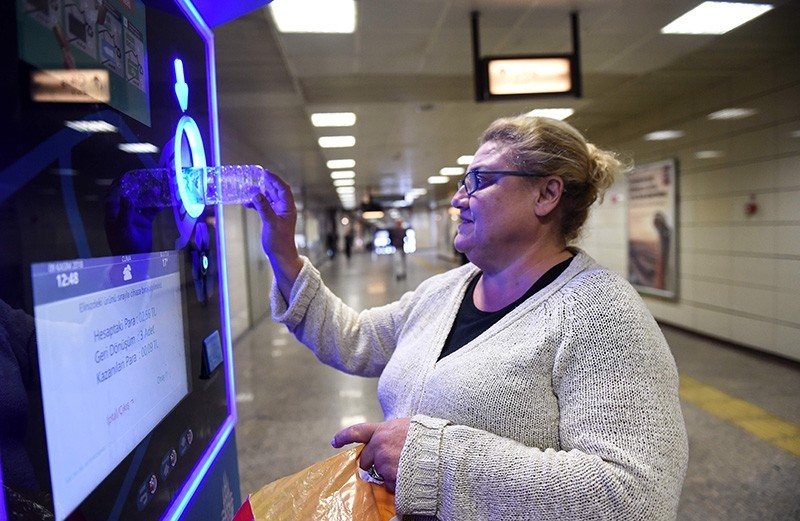 Reverse vending machines will be put in shopping malls across Turkey by 2021 in order to facilitate more recycling, the head of Turkey's Chamber of Environmental Engineers recently announced.

In line with the new regulations on packaging waste control that be become effective in the new year, shopping malls will be required to have reverse vending machines.

"By 2021, there will be automatic machines everywhere in Turkey," Head of the Chamber of Environmental Engineers Baran Bozoğlu was quoted as saying by Dünya newspaper.

The reverse vending machines are automatic recycling machines that transform recyclable materials and in return give credit or money, depending on how they are designed.

Bozoğlu said having the machines in shopping malls and supermarkets will help speed up the recycling process.

He also noted that mandating the machines "will open a new opportunity for domestic machinery manufacturers" to meet the new demand.

The Turkish government has recently supported recycling campaigns across the country as one of the goals of its environmental policy.

In late November, Parliament passed a new environmental law including a landmark restriction on plastic bags. Under new amendments, sellers will be obliged to sell plastic bags for TL 0.25 (approximately $0.05 cents), and they will be fined if they give bags for free to customers.

Environment and Urbanization Minister Murat Kurum said the charge will come into effect in January. He said that every Turkish citizen uses, on average, 440 bags a year, adding that Turkey aims to reduce this number to 40 by 2025.

Istanbul Metropolitan Municipality (IBB) also introduced "Smart Mobile Waste Transfer Machines" in September that put a refund for plastic bottles onto the recycler's transportation card. The goal is to have at least 100 machines installed across the city by the end of the year.