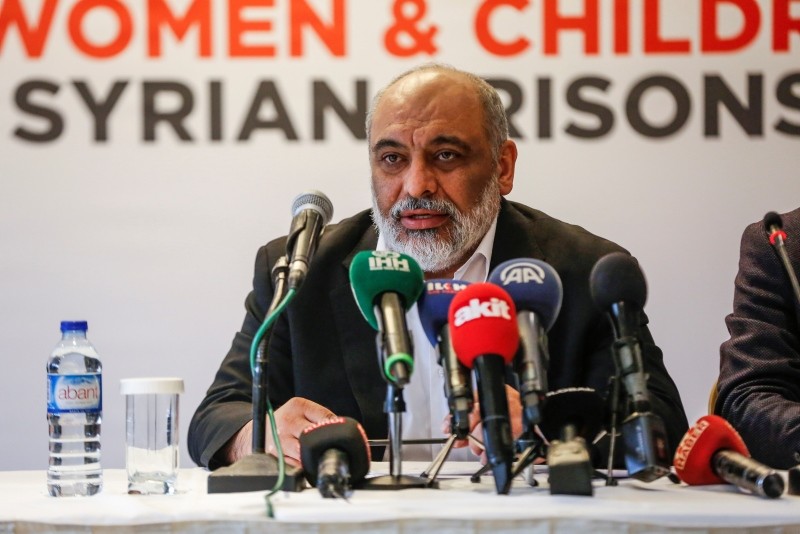 Several Turkish non-governmental organizations (NGOs) released a joint statement Monday calling on the international community to take action for the immediate release of women and children imprisoned in Syria.

The NGOs held a news conference in Istanbul under the motto "Till the last woman and child is freed" to mark World Human Rights Day on Dec. 10. The organizations drew attention to the brutal conditions of prisons in Syria where thousands of women and children are held captive.

Turkey's Humanitarian Relief Foundation (IHH) Chairman Bülent Yıldırım called the news conference 'a start' to addressing injustices in the Muslim world, adding that the organizations will ramp up their efforts in the new year to make the issue heard around the world.

"On this human rights day, I call on everyone. There are women in Syrian prisons, and they face all sorts of filth. (Regardless of being a) mother or daughter they all face the same troubles. They must be released as soon as possible," Yıldırım said.

Yıldırım criticized the Muslim world for not taking more action, pointing to Turkey's efforts regarding the issue and calling on the Assad regime, Iran and Russia to keep women and children out of bargaining deals and to release them.

Yıldırım said Turkey has discussed the issue with Russia, Iran, the Assad regime, the Syrian opposition, Kuwait and other Gulf countries. He said the issue should have topped the agenda at talks in Astana and Geneva, adding that it was the responsibility of the media and NGOs to inform the public about the suffering. He also accused Chechen President Ramzan Kadyrov of controlling some prisons in Syria.

Also speaking at the conference, Chairman of the Human Rights and Justice Movement Association (İHAK) Cihad Gökdemir said that according to the official numbers, more than 450,000 people, including 20,000 children were killed in the ongoing war in Syria within the last eight years and 150,000 people were missing.

"Some 6,319 of the women imprisoned in (Syria) are adults while 417 of them are children. 55 women have died because of torture. These numbers indicate only the confirmed cases. Some sources still report that 16,000 women and children are being held in different intelligence centers and prisons in Syria," Gökdemir said.

Gökdemir also cited data provided by the Syrian Network for Human Rights (SNHR), which reports that at least 8,633 women are being held in detention centers belonging to the conflicting parties and at least 7,000 of them are held in the Assad regime's prisons.

Gökdemir said that the primary grievances women face in regime prisons were rape and sexual harassment. Emphasizing that regime forces use rape toward female prisoners as a weapon of war, Gökdemir said that these crimes have become a part of the regime's political and military strategy to intimidate and suppress the women who oppose them as well as to shape these conflicts through these women's husbands.

Speaking at the press conference, Gamze Özçelik, a prominent Turkish actress and model who has gained notoriety for her aid work around the world, especially in African countries, said: "These things are very painful, very real. It's very important to do our best. It is difficult to explain the atrocities not only in Syria but in Bosnia, Palestine and Arakan (Rakhine State of Myanmar). I would be very happy if we could be the ones to save them from this persecution. I promise that I'll try my best."

Syria has been locked in a devastating civil war since early 2011, when the Assad regime cracked down on pro-democracy protests – which had erupted as part of the "Arab Spring" uprisings – with unexpected ferocity. Since then, hundreds of thousands of people have been killed and millions more have been displaced by the conflict.