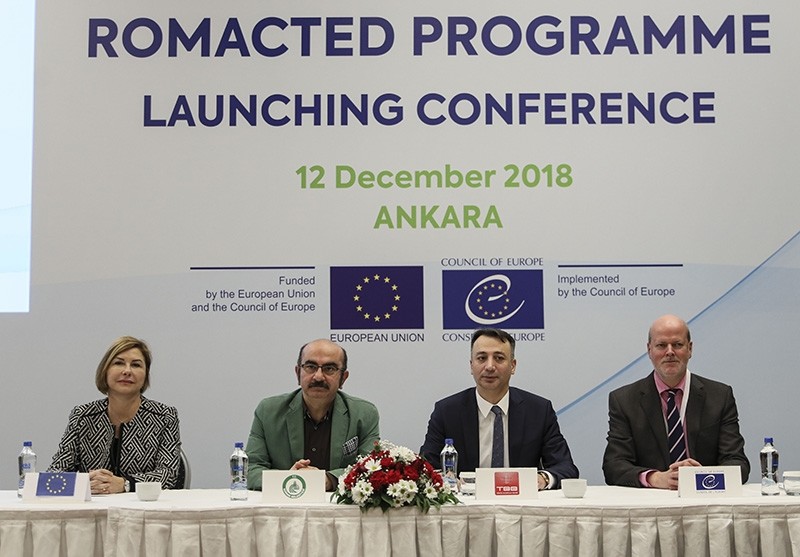 A joint program by the European Union and the Council of Europe aimed at strengthening Roma citizens' participation in local governance in Turkey and the Balkans was launched Wednesday in the capital Ankara.

The program, called "Promoting good governance and Roma empowerment at local level" (Romacted) and carried out by Union of Municipalities of Turkey (TBB), also aims to support local governments' work in the EU accession process and help municipalities benefit from the EU Commission's offerings, such as grants and technical assistance, TBB acting Secretary-General Ahmet Kazan said at the launching conference at Green Park Ankara Hotel.

Kazan, who cited a recent focus on social projects, said that the Romacted program will be carried out simultaneously in over 50 municipalities in Turkey, Albania, Bosnia and Herzegovina, Montenegro, Kosovo, Macedonia and Serbia for 24 months.

The six pilot municipalities participating in Turkey are: Canik in the northern city of Samsun, Edirne in northwestern Edirne province, Karadeniz Ereğli in northern Zonguldak province, Konak in the western metropolis of Izmir, and Pendik and Şişli in Istanbul.

Kazan said all necessary measures will be taken to support the full integration of Roma citizens into society with the support of both local and international associations.

Romacted Program Coordinator Ana Oprisan highlighted the importance of working with local governments to directly reach the public, calling municipalities "the main owner of the project."

"The project needs to be implemented by local authorities in order to be carried out in the long term," Oprisan said.

Oprisan also said that the project will consider the different living conditions of Roma citizens depending on the region they inhabit.

Michael Ingledow, head of Ankara Program Office of the Council of Europe, expressed his approval of this cooperation with the TBB and emphasized that the study is an important step to developing deeper cooperation in the future.

A tripartite Memoranda of Understanding on the implementation of Romacted in Turkey was also expected to be signed by TBB, Council of Europe and senior representatives from the six participating municipalities.

A National Workshop on Participatory Local Strategic Planning will follow the launch, to train municipality representatives and members of the Roma community on the implementation of the program.