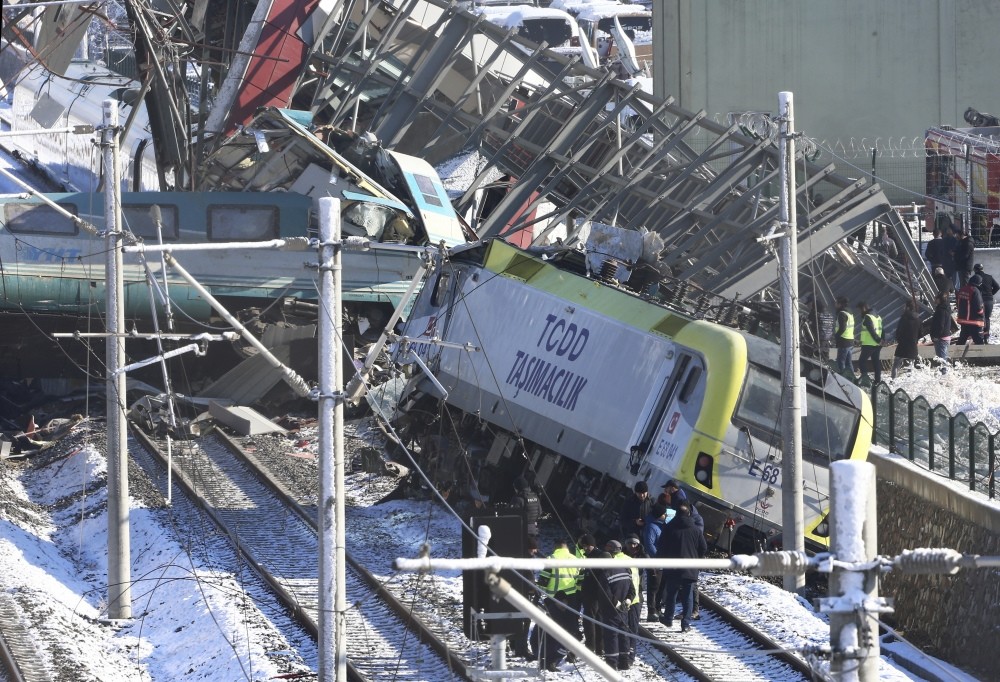 Three railway crew were detained as investigators look into a fatal train accident caused by a high-speed train crashing into a railway engine, as Turkey mourns the death of nine people in the collision

Turkey mourns nine victims of a train crash as investigators examine the scene of the accident. They will be looking into what caused a railway engine to stop on the same track as a high-speed train causing a head-on crash.

Three railway crew members were detained after the crash of the high-speed train traveling from the capital Ankara to the central city of Konya in the early hours of Thursday. The Health Ministry announced 84 people were admitted to hospitals as injured and 34 were still in treatment.

President Recep Tayyip Erdoğan, who extended his condolences for the victims, said an administrative and criminal inquiry was launched into the incident and investigators would find "those responsible" for the crash. 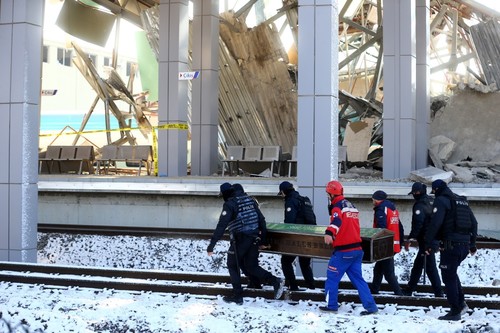 Workers carry the body of one of victims in a coffin in Ankara on Dec. 13.

Anadolu Agency (AA) reported that three people detained as part of the probe were an operations officer, a controller and a switchman; they have been charged with possible negligence.

Condolences poured in for the victims, while families of the victims and injured flocked to hospitals in Ankara. Officials said three among the victims were the train's engineers and the others were passengers. Two engineers were on the train and the other was on the railway engine. A fourth engineer was injured. Some among the dead and injured victims were commuters. One was identified as an astronomy professor while a male victim was a doctor at a private hospital in Konya who was residing in Ankara. Five of the injured victims were academics who commute daily to Konya Karatay University from Ankara.

The impact of the crash was so severe that media reports initially said that a pedestrian overpass collapsed on the train, it was later revealed that the train's cars were launched into the air due to the impact with the railway engine thus hitting the overpass.

The engine was tasked with checking any problems with the railroad for routine duty and officials said the crash happened a few minutes after the train left a station in Ankara for Konya.

Briefing reporters about the incident, Minister of Transportation and Infrastructure Cahit Turhan said the train left the main train station in Ankara at 6:30 a.m. and it crashed into the railway engine near another station in the city's Yenimahalle district around 6:36 a.m. The minister said the engine was returning to the train depot after completing examination of the tracks.

This is the deadliest train accident since July when 24 people were killed and hundreds injured after a train derailed in the northwestern province of Tekirdağ. Causes for the derailment were due to ground erosion of the soil under the tracks following heavy rains in the area.

The high-speed train service between the capital Ankara and Konya in the Anatolian heartland, was launched in 2011, three years before another high-speed route connecting Ankara and Istanbul. All were parts of Turkey's ambitions to expand and upgrade its railroad network and promote more train trips. The country, which currently hosts a 1,213 kilometer high-speed railway line, plans to invest more than $45 billion on railways in the next five years. Although they operate at high speeds (up to 250 kilometers per hour), authorities assuage public concerns on its safety due to a set of measures to prevent accidents from automatic brakes that work when the engineers incapacitated, to a system preventing exceeding of speed limits as well as a railway signal system up to world standards that prevents the crash of two trains.