Nationwide campaign against obesity with free aid to patients 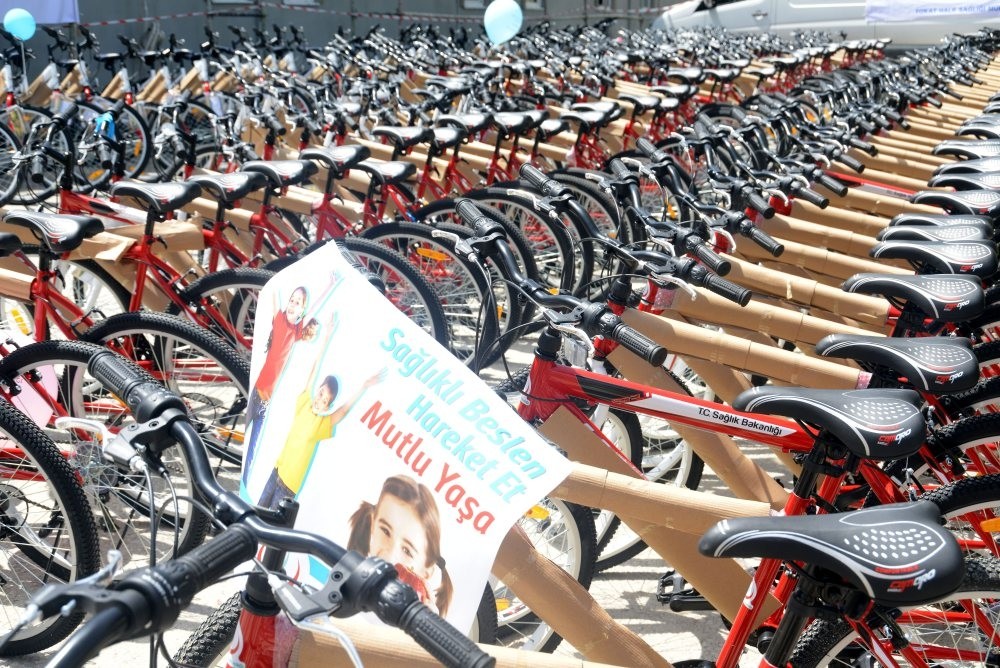 Bicycles allocated for delivery to students in the city of Tokat as part of Health Ministry's project to promote more physical activity to fight obesity.
by Safure Cantürk Dec 15, 2018 12:00 am

Obesity centers will be set up across Turkey with the aim of helping a population coping with rising rates of the disturbing phenomenon. The centers will offer guidance and psychological therapy to patients

Sedentary lifestyles and unhealthy eating habits have fueled obesity among the Turkish population. The country, where 32 percent of the population is obese, plans to launch what President Recep Tayyip Erdoğan called obesity centers to help citizens recover from the health condition.

Announced on Thursday, the 100-day action plan - a set of moves to improve economic, educational, health and other sectors in the country - says the centers will be established by the end of next year. In total, 64 centers will be founded in the first phase of the plan.

The centers, which will offer free services, will be staffed with dietitians, advisers for daily exercises and will also provide acupuncture and psychological therapy for patients.

A recent World Health Organization (WHO) report identified four in 10 Turks as obese. WHO defines obesity as having a body mass index (BMI) of more than 30, meaning a weight of more than 87 kilograms for someone measuring 1.7 meters.

According to the obesity update of the Organisation for Economic Co-operation and Development (OECD) countries in 2017, Turkey is among the top 10 most obese countries.

Since 2013, Turkey has implemented promotional health campaigns like "Move for Health" and "Reducing Portion Sizes" that involve mass walks and exercises and the reduction of portions of obesity-inducing foods. It banned unhealthy snacks to be sold at schools. Complementary to these, Turkey has launched the "Promoting Physical Activity Project" with thousands of bicycles distributed to schools, universities, municipalities and nongovernmental organizations for children to use.

New obesity centers will be placed in hospitals across the country and will have a multidisciplinary approach to the problem, monitoring patients in every area, from his/her psychology, to their nutrition, lifestyle and family life. Patients will first undergo a full body checkup and will then interview with experts specializing in internal diseases, cardiology, general surgery and psychiatry. Health care personnel will guide the patients during the process and a committee of doctors will have the final say on whether the patient is eligible for treatment.

Citizens suffering from obesity will be admitted to group therapy first with the purpose of changing their lifestyle and nutritional habits. Health authorities will run a 40-hour training program for patients to educate them on obesity and life and on how they and others perceive their body image, healthy eating, etc. Only those who complete the educational program will be admitted to the next phase of treatment that involves a two-month program with psychiatrists and dietitians to modify habits contributing to obesity. The program aims to reduce obesity levels without needing a lifelong diet and monitored exercises. Patients beyond the limit of shedding weight on their own will be admitted for medical treatment, first to be treated with acupuncture and other traditional therapies and later with surgery. Patients will be monitored after treatment to prevent them from regaining the weight.