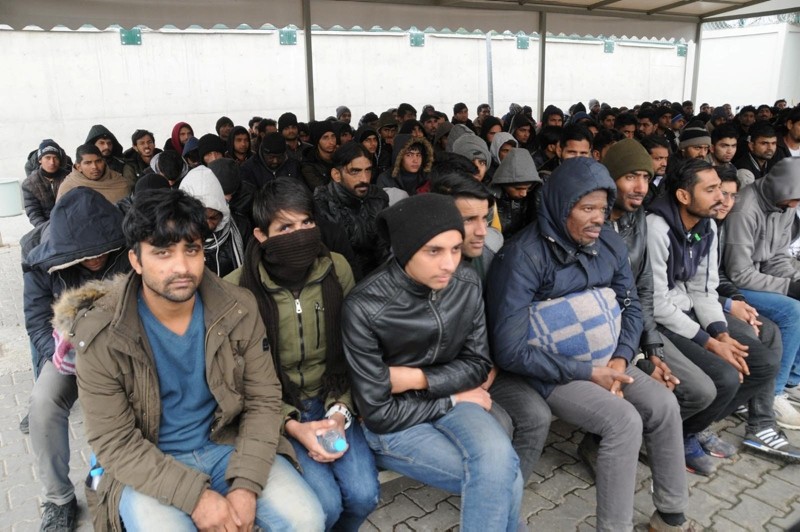 This file photo dated Dec. 05, 2018 shows migrants pushed back to Turkey by Greek officials waiting at an internment center in Meriu00e7 district of northwestern Turkey's Edirne province. (DHA Photo)
by Daily Sabah with AA Dec 18, 2018 12:00 am

A Human Rights Watch report, detailing the violent and fatal 'pushback' of migrants to Turkey after they were beaten by Greek officers, states that Greece acts intentionally and with impunity

Greek law enforcement officers at the Maritsa (Meriç in Turkish, or Evros in Greek) River routinely return asylum seekers and migrants to Turkey, Human Rights Watch said in a report released yesterday on the notorious "pushback" practice. Four migrants were found frozen to death on the Turkish side of the border in the first week of December and eyewitnesses claimed they were victims of forcible return to Turkey by Greece.

The river, which flows from Bulgaria through Greece and Turkey, is often used by irregular migrants who want to cross to Greece from Turkey from the Turkish province of Edirne where the river is located.

"The officers in some cases use violence and often confiscate and destroy the migrants' belongings," the report said. The report also included a video showing migrants being beaten and pushed backed into Turkey by Greek authorities.

Under international laws and conventions, Greece is obliged to register any illegal migrants entering its territory; yet, this is not the case for some migrants. Security sources say that accounts of migrants interviewed by Turkish migration authority staff and social workers show that they are forced to return to Turkey, where they arrived from their homelands with the hope of reaching Europe.

Todor Gardos, Europe researcher at Human Rights Watch, whose quotes were also included in the report, said: "People who have not committed a crime are detained, beaten and thrown out of Greece without any consideration for their rights or safety." Gardos said the Greek authorities should immediately investigate the repeated allegations of illegal pushback incidents.

"Despite government denials, it appears that Greece is intentionally, and with complete impunity, closing the door on many people who seek to reach the European Union through the Evros [Meriç] border," Gardos said.

The report said Human Rights Watch interviewed 26 asylum seekers and other migrants in Greece in May, and in October and November in Turkey, and they described 24 occasions of pushbacks across the Maritsa River from Greece to Turkey.

"Most incidents took place between April and November. All of those interviewed reported hostile or violent behavior by Greek police and unidentified forces wearing uniforms and masks without recognizable insignia," the report said.

The report said abuse included beatings with hands and batons, kicking, and, in one case, the use of what appeared to be a stun gun.

"The European Commission, which provides financial support to the Greek government for migration control, including in the Evros [Meriç] region, should urge Greece to end all summary returns of asylum seekers to Turkey, press the authorities to investigate allegations of violence and open legal proceedings against Greece for violating European Union laws," the report said.

Every year, hundreds of thousands of migrants flee civil conflict or economic hardship in their home countries in hope of reaching Europe. Edirne is a primary migration route. Turkish Directorate General of Migration Management data reveals that most of the migrants come from Pakistan, Syria, Iraq and Afghanistan. The numbers increase in late summer and autumn before dropping in the winter months.

Olga Gerovasili, Greece's minister for citizen protection whose ministry oversees border security, has denied previous allegations of pushback and told Anadolu Agency (AA) that Greece is not involved in such incidents. Yet, figures provided to AA by Turkish security sources show many illegal migrants were forced to go back to Turkey by Greek officials, with some 2,490 migrants being pushed back in November alone. The agency reports that some 300 of them were subjected to mistreatment by Greek security forces, ranging from beatings to being forced to go back half naked to the Turkish side of the border.

The Human Rights Watch report says that accounts collected for the report are consistent with the findings of other nongovernmental groups, intergovernmental agencies and media reports. In June, the Council of Europe's Committee for the Prevention of Torture said it has received "several consistent and credible allegations of pushbacks by boat from Greece to Turkey at the Evros River border by masked Greek police and border guards or [paramilitary] commandos." In November, the European council's human rights commissioner called on Greece to investigate the allegations in light of information pointing to "an established practice."

Ferhat G., a Syrian Kurdish man interviewed by Human Rights Watch, said two police officers detained him, his wife and three children, ages 12, 15, and 19, at an abandoned train station on Sept. 19. They were held in a large caged area in the backyard of a police station with dozens of other people for five hours.

Ferhat could not say where the train station or police station were: "We were all put in a van, 60 to 70 people. Commandos all in black, wearing face masks, drove us back to the river. We were very afraid … I saw other people there, mainly youths with just shorts, no other clothes. Our blood froze out of fear. When they opened the van, we started going out. 'Stand in one line, one by one,' they said and hit someone. Ten by 10, they put us in a small boat, driven by a Greek soldier. I cried because of the humiliation."

Karim L., 25, from Morocco, said that police officers removed him from a train to Alexandroupoli on Nov. 8. Shortly after its scheduled departure from Orestiada, at 12:37 p.m., police officers began asking passengers who looked foreign to show their passports and took Karim and five or six others off the train. The police took him to a nearby police station and kept him there for two nights. Then four men wearing police uniforms and black masks took him to the border in a van. He said they subjected him to physical violence and a mock execution, then pushed him back to Turkey. He was not photographed, fingerprinted, given any paper to read or sign or otherwise informed of the reasons for his arrest. He said that other people, including families with children, were also being detained in the station's three cells.