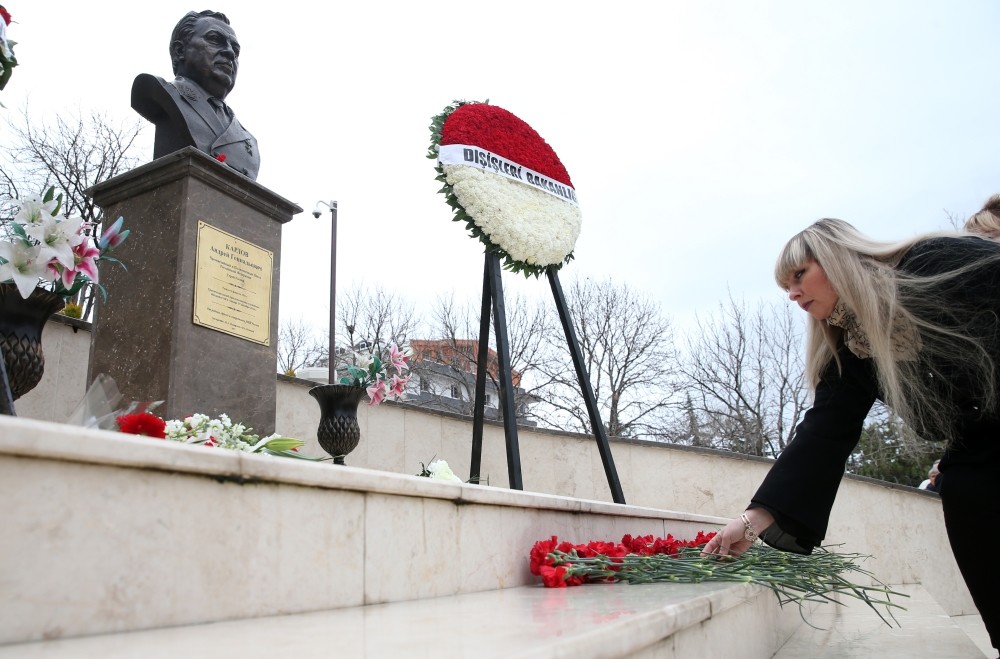 People lay flowers in front of a monument dedicated to Karlov at the Russian embassy in Ankara yesterday.
by Daily Sabah Dec 20, 2018 12:00 am

Russian Ambassador to Ankara Andrey Karlov was remembered yesterday in the Turkish capital, on the second anniversary of his shocking assassination by a policeman linked to the Gülenist Terror Group (FETÖ).

An Orthodox priest led a religious service in memory for Karlov at the embassy while Turks, Russians and diplomats from other countries left flowers at a monument dedicated to the late envoy.

The remembrance comes ahead of a trial for those involved the murder which is scheduled to begin on January 8.

Karlov was killed on Dec. 19, 2016 by Mevlüt Mert Altıntaş, an off-duty police officer with links to FETÖ, in an art gallery in the capital Ankara. Prosecutors indicted 28 people in the murder including terrorist group's leader Fetullah Gülen, a resident of the United States.

Prosecutors say FETÖ - which is also blamed for July 15, 2016 coup attempt in Turkey - sought to derail Turkish-Russian relations with the murder. The assassination was at a time of thaw between strained Turkish and Russian relations. Since the murder, Ankara and Moscow have gradually made progress in rebuilding their ties that were disrupted by the 2015 downing of a Russian fighter jet over the Syrian border by the Turkish military.

Altıntaş was killed in a shootout with police in the gallery after the assassination, after the chilling image of him shouting while waving his pistol next to Karlov's body on the floor.