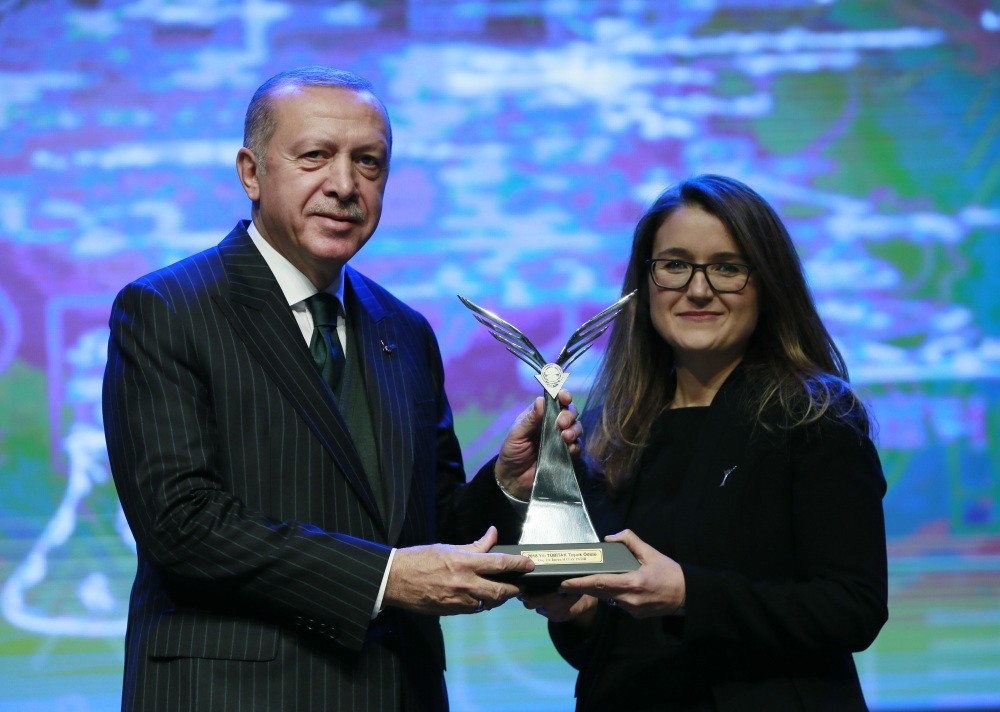 Turkey's two leading science bodies, TÜBİTAK and TÜBA, have honored 18 Turkish scientists at the Beştepe Presidential Complex for their accomplishments in different disciplines

The Scientific and Technological Research Council of Turkey (TÜBİTAK) and the Turkish Academy of Sciences (TÜBA) have handed out awards to 18 local scientists.

The awards, dubbed as "Turkey's Nobel," were delivered to recipients yesterday at the Beştepe Presidential Complex in Ankara at a ceremony attended by President Recep Tayyip Erdoğan.

In medicine, professor Ertuğrul Kılıç of Medipol University was awarded for his work in neurodegenerative diseases.

Professor Mehmet Acet of Duisburg-Essen University received an award for his work on the inverse magnetocaloric effect while Tanju Karanfil from Clemson University was recognized for his international study on environmental engineering focusing on water quality.

İmren Hatay Patır, an associate professor from Selçuk University received an award in chemistry. Hasan Şahin of İzmir Institute of High Technology was recognized for his physics work, along with Mehmet Zahmakıran of Van Yüzüncü Yıl University who was recognized for his work in chemistry. Other awards went to Nadir Dizge in environmental engineering, Engin Durgun in nanotechnology, Sedat Nizamoğlu in electrical-electronics engineering, Cengiz Erişen in political sciences, Eren İnci in economics, Ahmet Şensoy in finance and Mustafa Sami Topçu in science education.

Scientists and researchers from Mongolia, the United States and Romania also received awards.

Jackie Ying, an American scientist from the Massachusetts Institute of Technology was recognized for her work in nanotechnology. Ying's patents are used in nanomedicine and medical implants. Bold Luvsandorj from Mongolia is recognized for his work on the links between Turkic and Mongolian languages and ancient Turkic inscriptions.

Addressing the awards ceremony, President Recep Tayyip Erdoğan said that the presidency is tasked with supporting scientists and maintaining "a climate" for them where they can conduct their research freely.

"We encourage innovative ideas and provide grants. TÜBİTAK supplies free grants to academics and to the private sector's scientific projects. We have to be a nation developing and exporting technology to achieve goals in our drive for national technology, to ensure our independence," the president said in his speech.

He pointed out that Turkey has supplied more than TL 10 billion grants to 20,155 scientific projects in the past 16 years.

Turkey has recently launched a new program to attract qualified researchers from other countries with a new scholarship program aiming to reverse brain drain.

Within this program, the total scholarship starts at TL 500,000 for young researchers and TL 1 million for more experienced researchers. Researchers will receive a TL 20,000 or TL 24,000 scholarship per month depending on their experience level. Scholarship holders are to receive financial support for 24 to 36 months of the project.

The country's earlier efforts to bring back its academic diaspora ensured the return of more than 595 researchers to Turkey in the past eight years after they pursued a career abroad. TÜBİTAK has already drafted an inventory of Turkish scientists living abroad and offered scholarships in order to reverse the brain drain, in cooperation with the European Research Council.