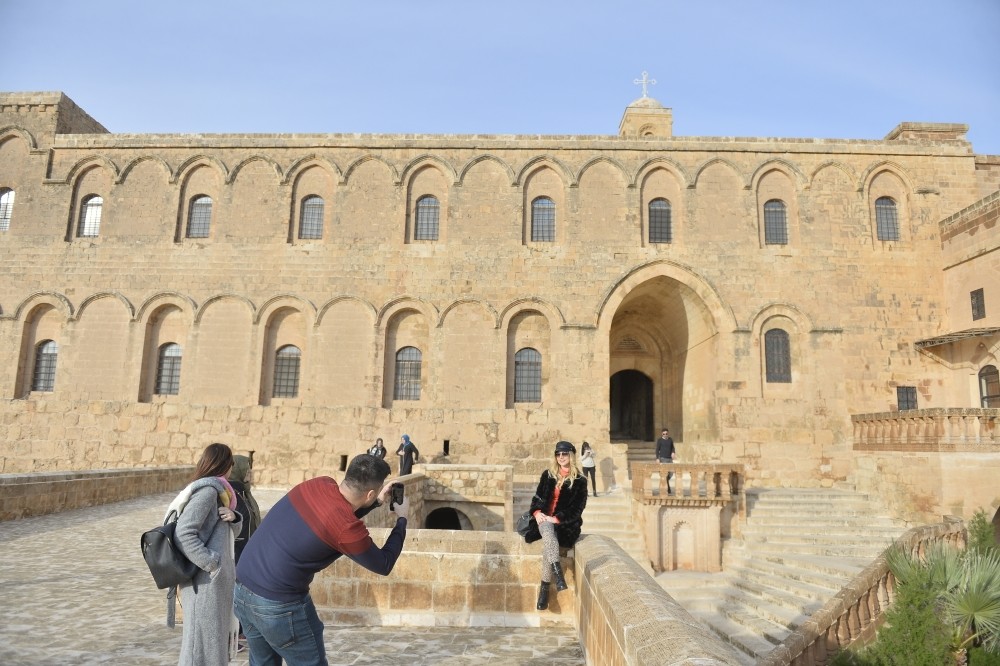 Tourists take photos in front of the Deyrulzafaran Monastery of Mardin. This Syriac Orthodox venue, known as ,saffron monastery, for the color of its stone is among the city's top touristic attractions.
by Daily Sabah with AA Jan 05, 2019 12:00 am

Mardin, a southeastern city with a rich history, saw a fivefold boost in its number of tourists in three years after safety was restored following a campaign of terror by the PKK

The southeastern city of Mardin, home to a rich mix of cultures with their heritage prevalent in its narrow alleys and splendid manors, enjoyed a fivefold increase in tourists. This boost comes in the wake of security operations that weeded out PKK terrorists from flash point districts. Three years ago, 113,000 people visited the city, but the latest figures show some 600,000 tourists visited Mardin in the first 11 months of 2018.

Tourism was badly hurt because of PKK militants' incessant attacks that targeted security forces and civilians, turning parts of the city into no-go zones. A security sweep in the wake of the PKK's bloody campaign three years ago eradicated the PKK presence in Mardin.

Nowadays, tourism businesses have seen a revival as tourists flock to the city to see its impressive skyline, a citadel crowning narrow alleys dotted with golden-colored houses, manors and a rich multicultural heritage that countless civilizations and faiths left behind. There is a constant stream of local and foreign visitors shuffling in and out of historic mosques, churches and madrassahs and taking selfies in the ancient stone houses.

Mustafa Yaman, who serves both as governor and acting mayor, as the city's former mayor was removed for links with the PKK, told Anadolu Agency (AA) that they exceeded expectations in terms of attracting tourists. He said the number of visitors reached 3 million last year, including those on daily trips. "Business owners are happy, and we want to bring in more visitors with social events," he said. Along with the usual profile of tourists, Mardin aims to draw tourists from Far Eastern countries that usually prefer Cappadocia in central Turkey for their trips. "We have good quality hotels, historic places such as manors serving as hotels, and tourism businesses offer quality services. Certainly, security is not a matter of concern anymore," Yaman says.

Özgür Azad Güngör, head of the Mardin Association of Tourism and Hoteliers, said businesses overcame a tough period. "Mardin is not associated with terrorism anymore and has climbed in the list of top tourism destinations. I hope we receive more visitors," he said, adding that they aim to host 1 million tourists with at least one night stays per year.İsmail Sincar, who runs a travel agency in the city, said he was satisfied with business last year. "November was particularly good, and we still have reservations for this month. I believe this interest is here to stay. It is good news that people prefer longer trips to Mardin year-round instead of just summer visits," Sincar said.

Gülbahar Çınar, a native of Istanbul, said it is her first visit to Mardin, and she was "fascinated." "I came here in winter, but it was a great pleasure to be here," she said. Tuğba Canbolat, another Turkish tourist, said the city was "beyond her expectations" and praised the hospitality of locals. "The cultural legacy here is a must-see," she said.

error attacks by the PKK caused key provinces of southeastern Anatolia, namely Diyarbakır, Şırnak, Hakkari and Mardin, to suffer economically. Attacks heavily damaged infrastructure and historic venues, from mosques to churches. The government launched a reconstruction process in the region after ending the brutal campaign. Thousands of houses, workplaces, mosques and schools have been restored by various state institutions under the leadership of the Environment and Urbanization Ministry.

Founded in 1978 under the pretext of Kurdish self-rule in southeastern Turkey where a predominantly Kurdish population lives, the PKK is listed as a terrorist organization by Turkey, the U.S. and the EU. Although there was a brief lull in its activities in recent years, the terrorist organization resumed its armed campaign in July 2015. Since then, it has killed some 1,200 security personnel and civilians, including women and children.