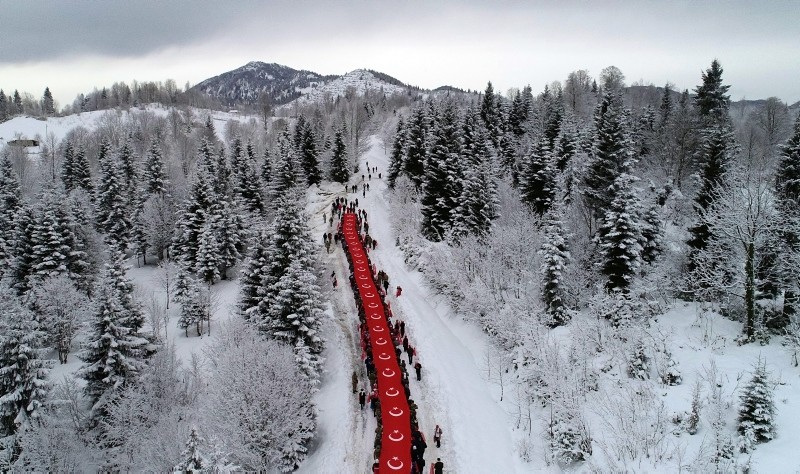 Marches were held all across the country Sunday to mark the 104th anniversary of a World War I campaign that claimed the lives of tens of thousands of soldiers due to freezing temperatures. The culmination of the marches was Sarıkamış, the center of the campaign, where thousands braved the cold for a re-enactment of the incident

Thousands of people across Turkey defied freezing weather Sunday to march in commemoration of the soldiers fallen in the Sarıkamış Campaign of World War I, a catastrophic chapter in Turkish history that also changed the fate of a nation.

People in every city marched in a re-enactment of the campaign where more than 90,000 soldiers froze to death in Sarıkamış in eastern Turkey. The largest march was in Sarıkamış, now a small town in Kars province. A crowd, including citizens and activists from various nonprofit organizations, stood in front of a large ice statue in the form of Ottoman soldiers throughout Saturday night. Later, about 20,000 people of all ages, including three cabinet ministers, marched to the Allahüekber Mountains where Ottoman troops succumbed to the biting cold during the campaign between Dec. 22, 1914 and Jan. 15, 1915. Bearing Turkish flags, the crowd started the march Sunday morning, chanting patriotic slogans amid snowfall.

Flanked by commandos of the Turkish Army dressed in white uniforms, they walked a 6.5 kilometer-long route at a height of 2,800 meters before reaching ceremonial ground to mark the end of the march. The route was where the soldiers are believed to have frozen to death in the cold weather. The ceremony ground was the spot on the summit of the Allahüekber Mountains that was the sole obstacle before the Ottoman troops commanded by Enver Pasha 104 years ago. Participants in the march recited passages from the Quran in memory of the fallen soldiers.

Large-scale commemoration ceremonies have been held in Sarıkamış every year since 2003 when it was confined only to a small group of climbers and activists.

Several other large marches were held across Turkey — from Trabzon to Antalya, from Mount Erciyes in Kayseri to Izmir.

Thousands of people across Turkey defy cold weather to march in remembrance of nearly 90,000 Ottoman Turkish soldiers who had fallen in the Battle of Sarıkamış in 1914-1915https://t.co/jxXIns7ta5 pic.twitter.com/jgAJVBeQrf

The Sarıkamış offensive undertaken by the Ottoman high command was the first military operation of the empire in World War I. The offensive that began late in December 1914 in the dead of winter quickly succumbed to adverse weather conditions, with units lost in a blizzard. Only a few units reached the destination of Sarıkamış, which was under Russian occupation at the time, and were repelled. Most of the troops froze to death before they even reached the Russian lines. Despite the Ottoman defeat, the Russian command was alarmed enough to call for help from its allies, which initiated the famous Gallipoli campaign where Ottoman forces emerged victorious. The Gallipoli campaign paved the way for Turkey's war of independence under the command of Mustafa Kemal Pasha, one of the commanders at Gallipoli who later went on to found the Republic of Turkey.

The Sarıkamış episode of the crumbling Ottoman Empire is etched in the memory of the Turkish public today as one of the last patriotic sagas of the early 20th century of Turkey apart from the Gallipoli campaign. It is highlighted as a mark of resolve the Turkish army had against all odds and without defying orders.

Images in the archives of the former Committee for State Security (KGB) reveal that even though Ottoman troops made some progress on the front, Ottoman forces were struggling overall. As foreign and Turkish soldiers recalled in their memoirs, it was almost impossible to bury the dead soldiers due to the severe weather conditions. Soldiers were not able to dig graves for their lost friends since the soil was frozen, and lighting fire in the exposed terrain was strictly forbidden since it revealed troop positions to the enemy.

Moreover, many soldiers barely managed to stay alive and only did so by placing flammable mushrooms covered with felt in their pocket stoves and then placing the stoves under their arms and legs. To make matters worse, the horse carts and gun carriages were hardly moving due to snowstorms, with 5,000 Ottoman soldiers missing or taken prisoner by the Russians.