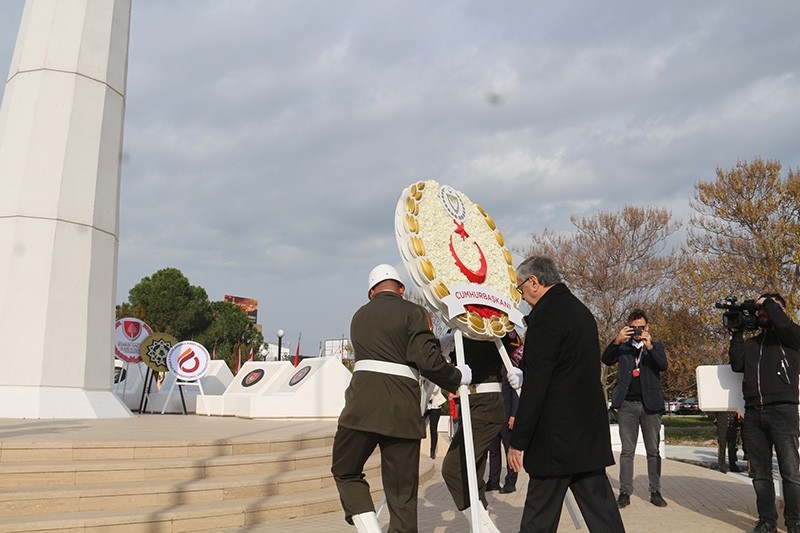 Turkey on Sunday commemorated the seventh death anniversary of the Turkish Republic of Northern Cyprus' founding father Rauf Denktaş, who passed away in 2012.

"I remember the founding President of the Turkish Republic of Northern Cyprus, and pioneer of Cyprus cause Rauf Denktaş, on the seventh anniversary of his death with respect and mercy," Turkish President Recep Tayyip Erdoğan said on Twitter.

Turkish Foreign Ministry also issued a statement saying: "We respectfully commemorate the late Rauf Raif Denktaş, the founding president of the Turkish Republic of Northern Cyprus, on the seventh anniversary of his passing away."

Denktaş will always "retain his exceptional place in our hearts and minds, as a leader who left his mark on history," it added.

"We will continue to fully support the resolute struggle of Turkish Cypriots, inspired by the late Denktaş, to achieve a just and lasting solution on the Island," it concluded.

Denktaş was born on Jan. 27, 1924, in the western Cypriot city of Paphos (Baf). He studied law in Turkey and Britain and returned to Cyprus in 1947, becoming an active member representing the Turkish Cypriot community before the British administration while serving as a prosecutor from 1949 and 1958. In 1957, in response to attacks by the EOKA militants aiming to unite the island with Greece and targeting the British administration along with Turkish Cypriots, Denktaş, along with two friends, formed the Turkish Resistance Organization (TMT), which aimed for partition of Cyprus.

At the same time, Denktaş also played a significant role in representing the Turkish Cypriot community before Ankara, London and the U.N. during negotiations that resulted in the London and Zurich Agreements in 1959 that paved the way for the independence of the Republic of Cyprus in 1960. Archbishop Makarios III was elected president, while then-Turkish Cypriot community leader Dr. Fazıl Küçük was elected vice president.

Beginning in 1963, the Greek Cypriot authorities launched a policy of expelling the Turkish Cypriots from government positions while forcing the community to live in enclaves through attacks and massacres. In this period, the TMT's importance increased greatly as the only group providing defense means for the Turkish community with Ankara beginning to actively support the group. After the events of 1963, Denktaş went to Ankara. Later, he returned to Cyprus by boat and began reforming the TMT. In 1964, Denktaş's entrance to the island was prohibited by Makarios following the London Conference. In 1967, Denktaş was arrested while attempting to secretly enter the island. After intensive efforts, Denktaş was returned to Turkey. In 1973, Denktaş officially replaced Küçük as the vice president – a post constitutionally reserved for the Turkish community – but in reality, Turks had no power in the government.

When a far-right Greek Cypriot junta backed by the military junta in Athens overthrew Makarios to unite the island with Greece, Turkey used its guarantor rights to intervene in the island on July 20, 1974, and established a bridgehead in Kyrenia. Turkish forces moved to capture the northern third of the island with a second operation in mid-August after the peace negotiations failed, aiming to liberate besieged Turkish Cypriot enclaves and establishing an area for the community to settle in. The second phase of the operation brought international condemnation as the junta was kicked out of power in the meantime, although the Turkish community was still living under the siege of the Greek Cypriot-dominated armed forces of the Republic of Cyprus and Greek paramilitaries, a notion that was attempted to be used as a bargaining chip by the Greek Cypriot side during negotiations.

During this period, Denktaş was praised by many for his efforts to improve the statehood of the TRNC, his firm stance in peace talks and for paving the way for institutions for an actual bi-communal structure on the island. However, many also criticized him for having a tight grip on the politics of the Turkish Cypriot community and blocking possible re-unification plans with his non-compromising attitude while the Turkish community was facing isolation on the international scene. This era came to an end in 2004, when nearly 65 percent of the Turkish Cypriot community approved the peace plan of U.N. General Secretary Kofi Annan in a referendum in July despite the objections of Denktaş. The Annan Plan failed since Greek Cypriots rejected it by a higher margin, but Denktaş, who pledged not to run for another term in May, had to step aside after the referendum. He was replaced by Mehmet Ali Talat after the presidential elections on April 17, 2005.

In his later years, Denktaş was less active in the public due to declining health. He suffered a stroke in May 2011. He died due to multiple organ failure at the Near East University Hospital on Jan. 13, 2012.

His son Serdar Denktaş currently leads the Democratic Party (DP) in the TRNC.