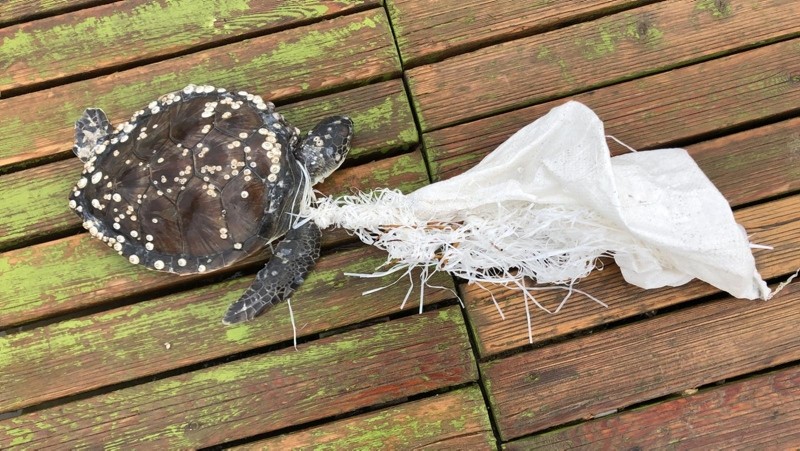 An endangered loggerhead sea turtle, known as Caretta caretta, has been found dead in the resort town of Bodrum in Turkey's southwestern Muğla province with a plastic flour sack wrapped around its head.

The village headman of Gündoğan's Küçükbük district, Ali Akbulut, saw the turtle near a beach pier. Bringing the turtle ashore, Akbulut determined it was dead.

The loggerhead turtle will be buried after being handed over to municipal teams, according to Anadolu Agency.

Loggerheads are classified as endangered species by the International Union for the Conservation of Nature. Adult turtles weigh between 77-227 kg (170-500 lbs).

Thanks to conservation efforts, every year more loggerheads come to Turkish shores to lay their eggs and baby loggerheads find their way to the sea. The Muğla-based Sea Turtles Research, Rescue and Rehabilitation Center (DEKAMER) leads efforts to protect the endangered turtles and ensure their successful breading on Turkish coasts. The turtles have more than a dozen nesting spots in the Aegean province of Muğla and the Mediterranean provinces of Antalya, Mersin, Adana, and Hatay.

Beginning on Jan. 1, Turkey launched a campaign to reduce environmentally-harmful plastic bag usage by requiring retailers to charge consumers for the bags. The Ministry for Environment and Urbanization has said Turkey's target is to reduce plastic bag usage per person – which is currently 440 annually – by 90 percent to 40 by 2025. Around 30-35 billion plastic bags are used in Turkey annually.