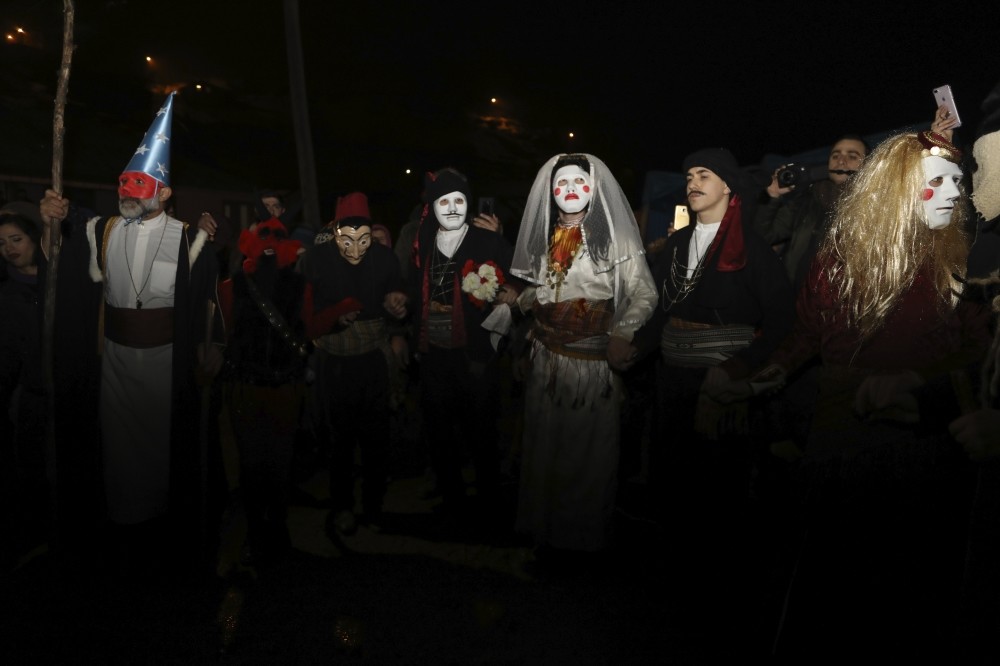 A group of Greek tourists joined Turks for Kalandar night in the northern province of Trabzon's Maçka district late Sunday. Kalandar, which is observed on Jan. 13 night every year, marks New Year on the Julian calendar, the predecessor to the Gregorian calendar and traces its roots to the ancient communities of Anatolia. Its name is believed to be derived from calandae, Latin for calendar.

Trabzon, which was once home to a large Greek community, was at the center of celebrations that resemble the Halloween traditions of Western countries. Adding a Turkish touch to the custom, locals donned traditional costumes and danced the horon, a folk dance born in the Black Sea region where Trabzon is located. Greek tourists joined the dance as musicians played local instruments, the kemençe and the tulum.

Maçka Mayor Koray Koçhan said the Kalandar tradition dates back to Ottoman times and remains significant nowadays as "an event to showcase the tourism potential" of the region. "We have Greek guests this year as well. They are descendants of people who coexisted with Turks here centuries ago. This is the land of their ancestors and [Kalandar] has been an opportunity for them to visit and relive a tradition we shared with them," he said.

Mirofora Efstathiadou, a Greek tourist, said they liked Trabzon very much. "Our great-grandparents were born here and both Muslims and Christians used to observe Kalandar together 100 years ago. I love Trabzon. It is the home of good people, and there is more to see here than Hagia Sophia and Sümela," she said, referring to ancient Christian churches and monasteries that are popular tourist attractions.

Kostas Alexandridis, another Greek tourist, said they liked the people of Trabzon because their ancestors were "friends" of their ancestors. "We share the same culture," he added.

Though traditions regarding Kalandar vary throughout the Black Sea region, it usually starts with sprinkling water around one's home and boiling corn. Locals leave their doors open in the morning, while children go door to door, leaving sacks which residents in turn fill with fruits, candy or chocolate, while some don scary costumes as part of the tradition.