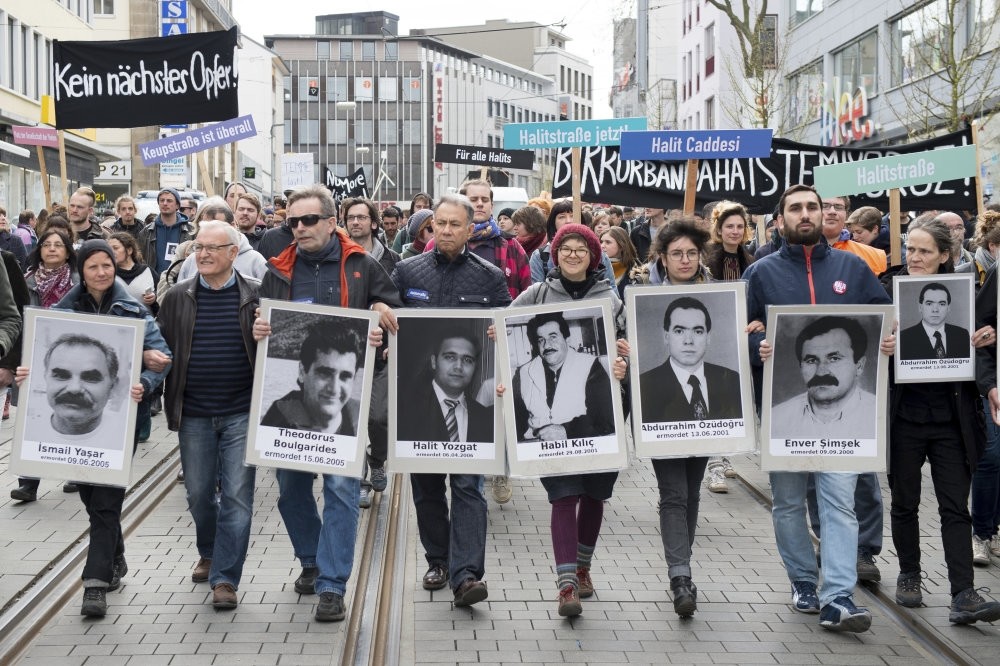 Demonstrators carrying photos of NSU victims and a banner reading ,No Other Victim!, walk through downtown Kassel, Germany on April 6, 2017.
by Daily Sabah with Wires Jan 15, 2019 12:00 am

Seda Başay Yıldız, one of the Turkish lawyers for a victim in a trial against the NSU neo-Nazi gang, received another threatening letter signed ‘NSU 2.0' a few months after unknown far-right extremists who allegedly including police officers, sent her death threats

Just as Germany closes a chapter in the National Socialist Underground (NSU) saga, a new incident shows the far-right threat is far from over in the country. Seda Başay Yıldız, a German lawyer of Turkish origin for victims of the NSU gang, received a fax, this time signed "NSU 2.0," containing insults and death threats, a few months after she was sent a threatening letter. German media outlets reported that the fax mentioned names and addresses of her extended family members. "You can't find this information on social media," Yıldız was quoted by the media as saying. Yıldız had already filed a complaint in August 2018 after receiving death threats directed at her daughter and a police investigation found that her data was retrieved by a police computer in Frankfurt.

The probe has disclosed a suspected far-right group within Frankfurt police and five officers were suspended from duty. The new fax sent to Yıldız mentions this case and says the suspension of the officers would be avenged, while it also threatens to decapitate the lawyer's daughter, along with "rest of your döner crew," a derogatory term used by far-right extremists to describe Turks living in Germany.

Authorities did not release any statement regarding the new threat, but German media reported that police visited Yıldız and assured her she was safe. Süddeutsche Zeitung newspaper, nevertheless, quoted the lawyer's friends as saying that police suggested she obtain a gun license to protect herself, to the chagrin of Yıldız.

Yıldız told Anadolu Agency (AA) after last year's threatening letters that she was getting many threats but she did not take them very seriously, saying: "This time my daughter's name and home address were written. That's why I filed a criminal complaint for the first time." Stating that the investigation was launched after she filed the complaint, Yıldız added that she did not want the police to cover up the incident.

The investigation revealed that information about Yıldız was viewed from a computer at the Frankfurt police station without any official reason for questioning. It also found that the police officers, who had access to the computer, were sending each other messages with swastika symbols and Hitler's photos on a group they created online. Following these revelations, a lawsuit has been initiated against five police officers on suspicion of inciting ethnic hatred and using "anti-constitutional" symbols.

Last week, a German police officer in Hesse was identified as a suspect for leaking internal information to a member of a neo-Nazi group. According to Süddeutsche Zeitung, this is the sixth police officer who is suspected to have connections with neo-Nazis within the Federal Criminal Police Office of Germany (LKA) in Hesse.

The German Police Federation (GdP) acknowledged the presence of right-wing radical elements among its officers following the suspension of five officers in Frankfurt in December. The investigation over the far-right network has also widened to other cities, as a police station in the Marburg-Biedenkopf district of the same province was put under investigation.

German authorities are increasingly concerned over the growing right-wing terrorism in the country. Lately, far-right groups have drawn up several "enemy lists" containing names and addresses of more than 25,000 people, a parliamentary inquiry revealed in July. The Interior Ministry said the lists were found in various police investigations and operations against far-right groups in the last seven years. Since 2016, Germany has conducted an increasing number of nationwide raids targeting right-wing groups, including houses, apartments and other properties believed to be owned by members of such groups, targeting the so-called "Reich citizens' movement," known as the Reichsbürgers.

The NSU killed eight Turkish immigrants, one Greek citizen and a German police officer between 2000 and 2007, but the murders have long remained unresolved. Recent investigations have revealed severe failures of intelligence and the failure of police units in the eastern state of Thuringia to disrupt the group. The NSU is believed to have been founded by three far-right extremists, Uwe Mundlos, Uwe Bohnhardt and Beate Zschaepe, who lived in Thuringia in the early 1990s. Seda Başay Yıldız was the lawyer for Enver Şimşek's family; Şimşek was murdered in 2000 by the group.