Evidence rooms in biggest courthouse a trove for investigators 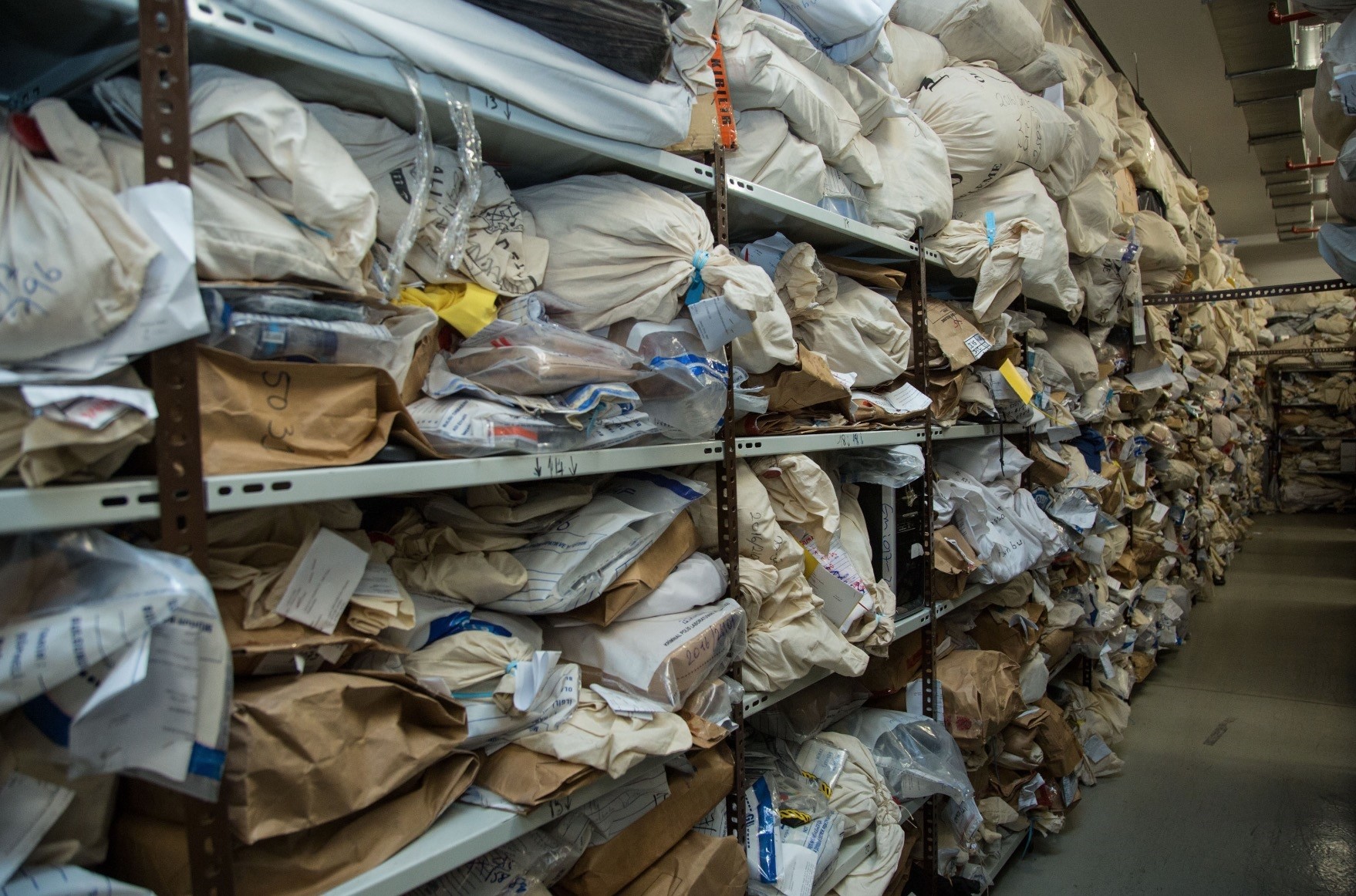 Some 19 evidence rooms in the u00c7au011flayan courthouse holds everything from guns to plastic bottles, all evidence in criminal cases.
by Jan 17, 2019 12:00 am

The evidence rooms at the Istanbul Justice Palace, the largest courthouse in Europe, house thousands of pieces of evidence - from guns to plastic bottles, all key parts of ongoing trials

The Çağlayan courthouse, or Istanbul Justice Palace as it is officially known, is Europe's largest courthouse with an area of 300,000 square meters. Home to six separate courthouses, this sprawling complex on Istanbul's European side also hosts the largest evidence rooms in the city. Four stories below the first floor, 19 evidence rooms serve as a key component of the building.

Evidence Bureau Prosecutor İbrahim Çiçek is in charge of the massive rooms where shelves are stacked with everything from guns to plastic bottles. Giving the press a tour, Çiçek said evidence rooms are the backbone of justice. "Even the loss of a small gun shell means disruption of justice," he said.

Rooms in the courthouse where the most important trials were held or are being held store only valuable evidence while smaller evidence like documents are held in criminal files elsewhere in the courthouse. They have every piece of evidence regarding key trials, including the July 15, 2016 coup attempt of the Gülenist Terror Group (FETÖ), one of the most traumatic episodes in recent history, as well as the Ergenekon and Balyoz trials allegedly used by FETÖ infiltrators in the judiciary to imprison FETÖ's opponents and critics. 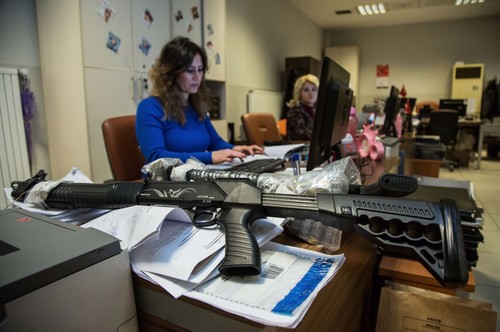 Since the establishment of the courthouse in 2011, thousands of pieces of evidence have entered the rooms after meticulous scrutiny by clerks and prosecutors. Çiçek said they also brought in evidence from six courthouses that were moved to Çağlayan. "There was even evidence dating back to 1968 from the Sultanahmet courthouse. We eliminated them [as the cases were closed]. There were guns collected from people after the 1980 coup, some 3,500 guns; all were destroyed," he said.

Not all evidence is stacked together. One room is for drugs, while another serves for guns captured in police operations. Along with "classic" evidence such as automatic weapons, gambling machines etc., Çiçek said $1 bills that arrived after FETÖ's coup attempt were likely the most interesting. The secretive FETÖ made its members carry the bills as a sign for one member to recognize another. "A soldier captured in a FETÖ operation even had a photo of himself on the bill," Çiçek said. Bills captured in other operations are supposed to be destroyed, but those from FETÖ operations are in evidence rooms, as they remain key evidence in trials of the terrorist group.

Security cameras are ubiquitous both inside and outside the spacious rooms, while some valuable pieces of evidence are stored in rooms with doors accessible only with passwords.

Drugs seized in counter-narcotics operations probably have the shortest stay in the rooms. Once a court announces its verdict on what to do with seized drugs, they are mostly destroyed. Çiçek is also in charge of the drug destruction bureau of the governorate and said they destroyed drugs worth millions of U.S. dollars in seven years. They use a massive boiler in a cement plant to destroy the drugs at 2,000 degrees Celsius.

A strong odor prevails in rooms where drugs are stored. "Clerks can only stay for 15 minutes after they open the door," Çiçek said, showing heroin, Captagon pills and kilograms of cocaine in sacks. "There are drugs worth $100 million," he added.

No matter how small or big, every piece of evidence is valuable, Çiçek said, as he showed a plastic bottle, "probably left by someone who committed suicide." Elsewhere, he showed a piece of cloth, hard drives and computers. In another room, checks worth $1 million are stored.

Not everything is suitable to be stored in the rooms, though, Çiçek said. "After the 2016 coup attempt, they wanted to bring anti-aircraft guns and grenades here, but it was impossible for us to store them safely. So, we sent it to a military warehouse. They also wanted to bring in a minivan. It was an interesting piece full of eavesdropping devices, but it wouldn't fit here. So, we turned it down," Çiçek said.