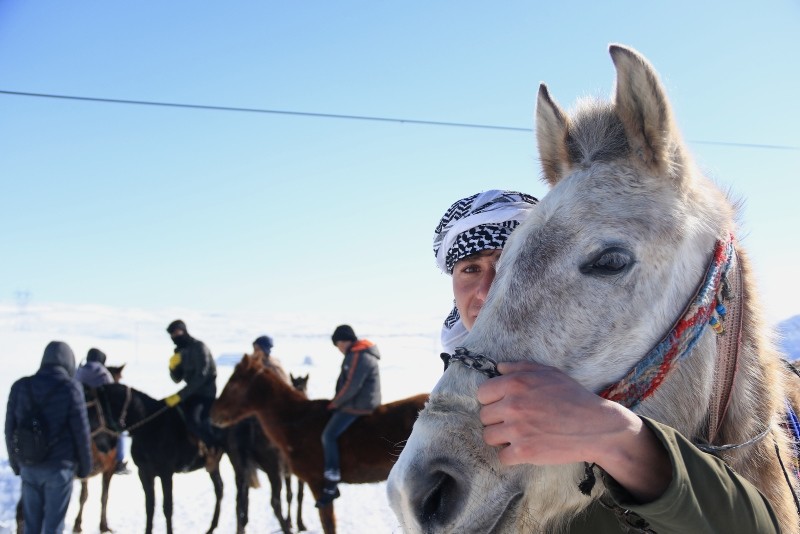 residents of Toklular village in Karlu0131ova district train their horses every day for the summer races. (AA Photo)
by Daily Sabah with AA Jan 21, 2019 1:03 pm

Despite deep snow and subzero temperatures, villagers in southeastern Bingöl province's Karlıova district train their horses every day without fail for the annual races held during the summer months.

The residents of Toklular village in Karlıova district, whose name means "snowy plain" in Turkish, earn their livelihood by breeding animals, while horses are one of the important animals for them as they enjoy riding them and training them for the races traditionally organized each year in July.

Underscoring that practicing on the lands covered with heavy snow, sometimes where the snow depth exceeds one meter, is beneficial for the horses as they gain strength while it also gives them the opportunity to be in the open air rather than in closed stables, the villagers say they take their horses outside for training almost every day.

Turgay Yılmaz, one of the residents, told Anadolu Agency that the horses have an important place in their lives in Bingöl, as it is in the whole of Anatolia.

"Everyone has a horse in this village which consists of 300 households. Youngsters usually ride them only, but everyone loves them," Yılmaz said.

He said that running in the snow is very good for the horses' health and it cleans their feet.

Another resident, Ayetullah Kışlakçı who has been riding since he was eight and is one of the best riders in the village, said that he loves horses very much and they train them during the winter to prevent them from losing their form.