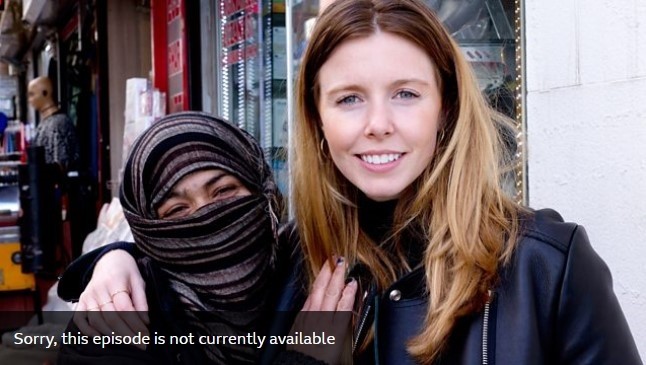 A Turkish journalist's investigation into doubtful scenarios portrayed in a BBC documentary series has revealed that a woman interviewed in Istanbul's Aksaray who was portrayed as a Syrian refugee from Aleppo is actually a Turkish beggar.

Hürriyet journalist Ilker Sezer was prompted to investigate suspicious scenes in the episode on Turkey after former journalist Claas Relotius of Germany's Der Spiegel confessed that news he published about immigrant children in Turkey was false.

In the BBC documentary series called "Sex in Strange Places," aired on BBCThree, a woman named Fatma is described as a 35-year-old Syrian who fled Aleppo by paying human smugglers at the Turkish border and was forced to resort to begging and prostitution after failing to receive "any support" in Turkey.

BBC presenter Stacey Dooley claimed Fatma was forced to prostitute herself because she couldn't earn enough by begging during the day.

Sezer, however, upon investigating the story, was told by a tradesman in Aksaray that he knew the woman to be a beggar from Harran in Turkey's southeastern Şanlıurfa province.

In the episode, Dooley slams what she calls "racist" treatment against Fatma, claiming Turkey has not given Syrian refugees any support or rights.

"This treatment is because this woman is Syrian. This is very racist behavior. Unacceptable," Dooley says after her film team is denied permission to film in the Vakıflar Çarşısı marketplace.

But when Sezer went to Vakıflar Çarşısı, he heard a different story. One longtime tradesman, Veysel Gül, said he has seen the woman, who he estimated to be about 50 years old, at the marketplace for 15 or 20 years. He said she speaks Turkish, Kurdish and Arabic, and spoke to the BBC for money.

Sezer also talked to Ishan Ünal, a tradesman shown in the BBC episode. Ünal also said Fatma was immediately recognized as the Turkish beggar, even with her face covered in the documentary. He said the team was not allowed to film in the marketplace for the sole reason that they did not obtain permission to do so.

The producer of the BBC documentary, Julia Rooke, said that the woman who claimed to be a prostitute in Aksaray was an ethnic Turkmen, and didn't have any identity documents because of her illegal flight from Aleppo to Hatay. She went onto claim that a local had helped find the supposedly Syrian woman in an effort to pin the blame on someone else.

However, the local Turkish producer who helped the BBC crew with the documentary immediately shot down the claim, saying "I only went [with them] to translate a couple of times."

"I don't know who found this woman and the others," he told the Hürriyet.

In an email to the Hürriyet, Rooke wrote: "Her husband served in Assad's army. They have shops in Aleppo. Because they entered Turkey illegally, they have no official documents. Her husband was sick, her eldest daughter was kidnapped by Daesh terror group. She spoke Arabic, her Turkish was quite bad."

The episode also visits Kasnakçılar Street behind Süleymaniye Mosque in Fatih, which it calls "the biggest ghetto" for Syrians in Istanbul. Local shopkeeper Ibrahim Ulusoy, who has lived in the neighborhood since 1973, said that while it's true that there were many Syrians in the area in 2015 when the documentary was filmed, there were only two families living on Kasnakçılar Street.

Der Spiegel's formerly famed journalist Relotius, 33, resigned in December after admitting to making up stories and inventing protagonists in more than a dozen articles in the magazine's print and online editions, including a feature on child immigrants in Turkey.

Relotius published a photo of two refugee brothers, Ahmed and Ali, who he called "child slaves." The story was revealed to be fabricated in December.