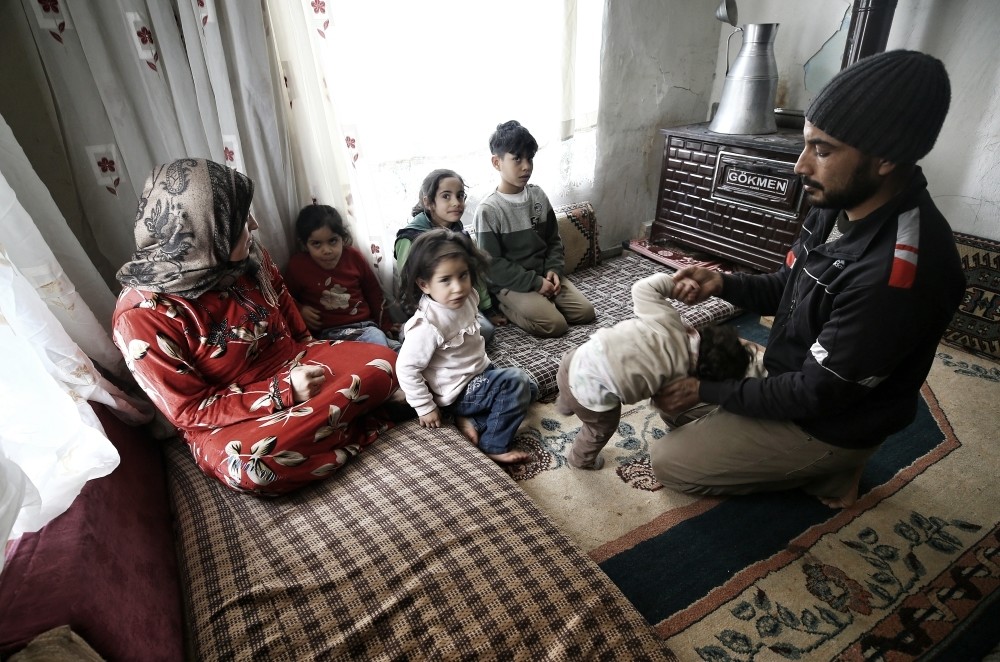 Khaled and Nevroz Ahmer, a Syrian family hailing from eastern Ghouta, play with their children in their home in the central city of Konya on Jan. 18, 2019.
by Daily Sabah with AA Jan 22, 2019 12:17 am

Although most Syrian refugees have taken shelter in Turkey, a lot of them are still on the move and often change places to find jobs and homes. New studies show that the most difficult part for them is accessing social services

Research as part of a big data contest about refugees to address their problems indicates that the mobility of Syrian refugees poses an obstacle to their access to social services, such as health and education.

The contest, organized by Boğaziçi University and the state-run Scientific and Technological Research Council of Turkey (TÜBİTAK), aims to utilize big data to analyze the refugees' needs, such as health, education, security, social integration and addresses concerns like unemployment. Some 110 projects from 157 researchers from Turkey and abroad competed in the project.

Researchers had access to big data sets of anonymous mobile phone use by a Turkish telecoms operator that covered 200,000 Syrian refugees.

Multiple studies presented in the contest found out that cultural factors played a major role in Syrians' mobility in Turkey, while seasonal jobs had less impact on their travels to other cities. Even refugees with minimum mobility had changed places for a considerable amount of time, the studies show, highlighting that this posed a challenge for their access to education and health services.

Associate professor Semih Tümen, one of the researchers in a study on how to improve education opportunities for better integration of Syrian refugees, says the majority of Syrians in Turkey were young, and the education was key for them to recuperate what they lost once they returned home.

He said a good integration is necessary so that education of Syrians would not be hindered. Tümen said they focused on the schooling rate of Syrians in their study and found that schooling was lower in areas where Syrians are less integrated into economic and social life.

"They even have a better schooling rate than pre-war Syria, especially in grade school education, but the high school attendance rate dropped to 20 percent in some places. Refugees' mobility to find employment affect their children's steady schooling," Tümen says.

He added that Turkey should not allow refugees to live in their own neighborhoods closed to other members of society and integrate them more as well as creating new education policies for them.

Harald Sterly of Bonn University, who was part of a team of six researchers from three countries who studied the mobility of refugees, said it was costly for a host country to provide education, health and employment services for refugees if they are constantly mobile. Still, he says refugees were less mobile than they thought. "For instance, the rate of those staying in one place was 58 percent according to data from early 2017 and only 15 percent of refugees settled in one places went to another."

"There is a portion of refugees going to any place where they can find jobs but there is also a segment of the refugee population preferring to remain settled. Most of those traveling leave for the capital Ankara and Istanbul," Sterly said, adding that the highest rate of mobility occurs during religious holidays, pointing out that cultural causes played a more important role than employment in mobility.

Turkey is home to more than 3.5 million Syrian refugees. Ten cities host some 2.8 million refugees, while others are scattered around the country. Since 2011, Turkey has received a constant flow of displaced Syrians fleeing the conflict, and their numbers have expanded from mere thousands to millions. So far, Turkey has spent more than $30.2 billion on their well-being.

The conflict in Syria that started in 2011 has killed hundreds of thousands of people and forced more than 5 million people to flee, while more than 7 million are internally displaced. Refugees mainly took shelter in Turkey, Jordan and Lebanon with Turkey hosting the largest number of refugees. Some have sought to reach Europe via the Aegean and Mediterranean seas, but hundreds died en route to Greece and other littoral countries.

Turkey's Disaster and Emergency Management Authority (AFAD) has led the efforts to shelter refugees and operate tent camps and modern prefabricated housing units for refugees in several border provinces. However, only a small fraction of refugees stay in camps.