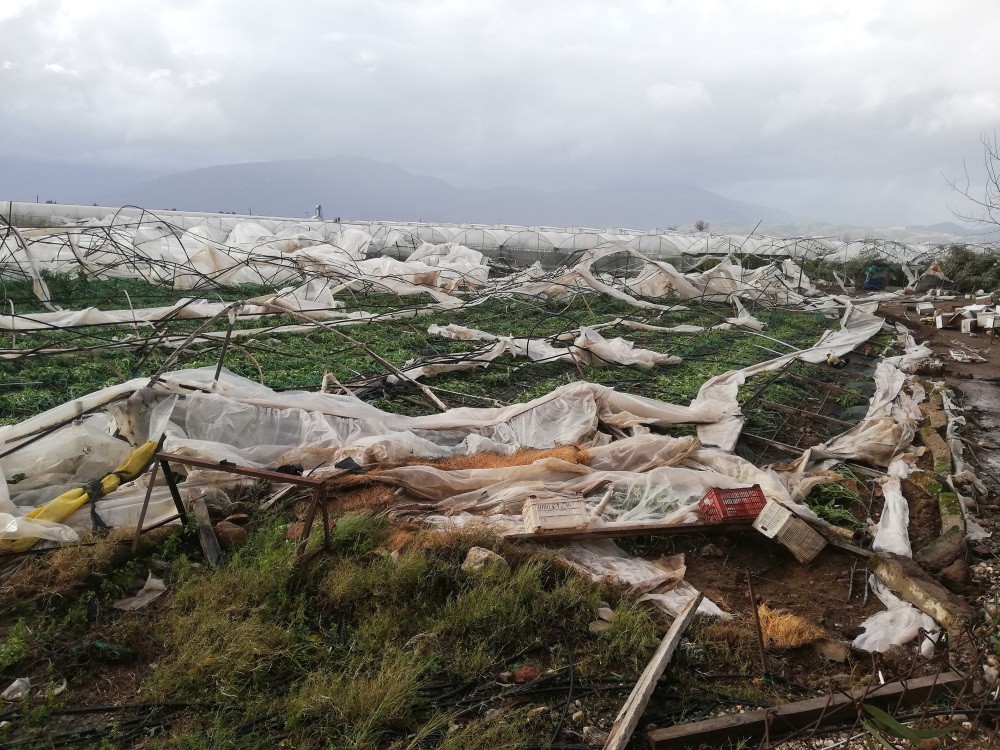 A tornado devastated greenhouses in Antalyau2019s Kumluca district where agriculture heavily relies on greenhouses.
by Daily Sabah Jan 26, 2019 12:09 am

A rare tornado on Thursday left havoc in its wake across the Mediterranean city of Antalya, killing two people. Farmers were particularly affected by the weather event and sought to remove debris and collect unaffected crops, while experts warned of more storms in the area

A tornado that reached speeds of 100 kilometers per hour wreaked havoc in the Mediterranean city of Antalya on Thursday. Locals and authorities examined the damage it left in its wake and started removing debris.

The tornado, which occurred at sea near the Kemer and Kumluca districts, was particularly devastating to crops in greenhouses prevalent in the city's rural areas. A 13-year-old girl and a 40-year-old man, who were hit by parts of a roof the tornado ripped apart, were among the victims of the disaster, while some 15 others were injured. A search was underway on Friday for a 20-year-old university student who went missing when her car drifted into a river due to the tornado. Her mother survived the incident. 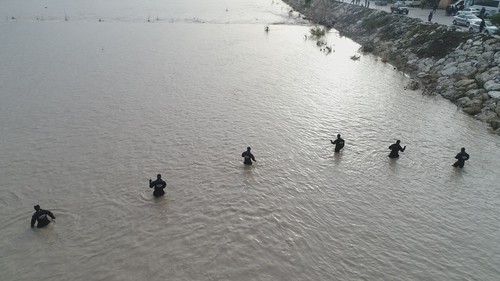 Police squads search for Buse Acar, a 20-year-old woman who went missing after a car she was traveling in drifted into a river during the tornado, Jan. 25, 2019.

The disaster affected eight districts in Antalya, a popular destination for Turkish and foreign tourists. Accompanied by a strong storm, the tornadoes tore apart roofs and knocked down trees, while giant waves battered the city's shores. Greenhouses were among the most damaged as the tornado ripped through them and devastated crops. Farmers rushed to pick up unaffected crops on Friday. Authorities were still investigating the damage, but it is believed that the disaster cost millions of Turkish liras in damage to greenhouses in this fruit and vegetable hub that delivers produce to cities all across Turkey. Power cuts that affected the Finike district ended on Friday after repairs to power lines that had been knocked down by the storm.

Weather forecasts for Friday and Saturday indicated more bad weather with heavy rainfall. In the Kumluca district, the municipality warned locals working outdoors to be cautious of strong winds.

İsmail Demirel, who owns a greenhouse where he raises tomatoes in the Kumluca district, said he "lost everything in five minutes" [of the tornado]. Speaking to the Demirören News Agency, Demirel said he did not have insurance for the greenhouse and they had just started harvesting on Thursday when the tornado hit. "I am trying to salvage what's left," he said as he scoured the wreckage of the greenhouse and picked up still edible tomatoes. He said the tornado cost him TL 300,000.

Muhammet Çelik, another greenhouse owner, said the tornado had reached 10 kilometers inland and workers in the greenhouse narrowly escaped the disaster. "Aubergines, peppers, cucumbers: all were destroyed. Produce had already been hit by floods [in the past months], and it drove up prices. There is nothing left for farmers to earn," he lamented.

Leading a delegation of high-ranking officials visiting tornado-hit areas, Minister of Agriculture and Forestry Bekir Pakdemirli said about 5,000 acres of greenhouses were damaged in the Finike and Kumluca districts and the government would later announce payments to farmers whose crops were damaged by the disaster. "Preliminary examination will be completed within a week. We are looking for ways to heal the wounds here," he told reporters. Pakdemirli said Antalya saw "rainfalls above normal" in addition to the tornado.

Tornadoes, which most commonly occur in the United States, are a rare weather event in Turkey and less intense. They are mostly sighted at sea, off the country's Mediterranean shores. Authorities warned the public to stay indoors in a basement or lower floors during tornadoes and cut off power and water supplies, and if they are driving, leave the car and shelter in the nearest building or in a ditch if there are no buildings around.