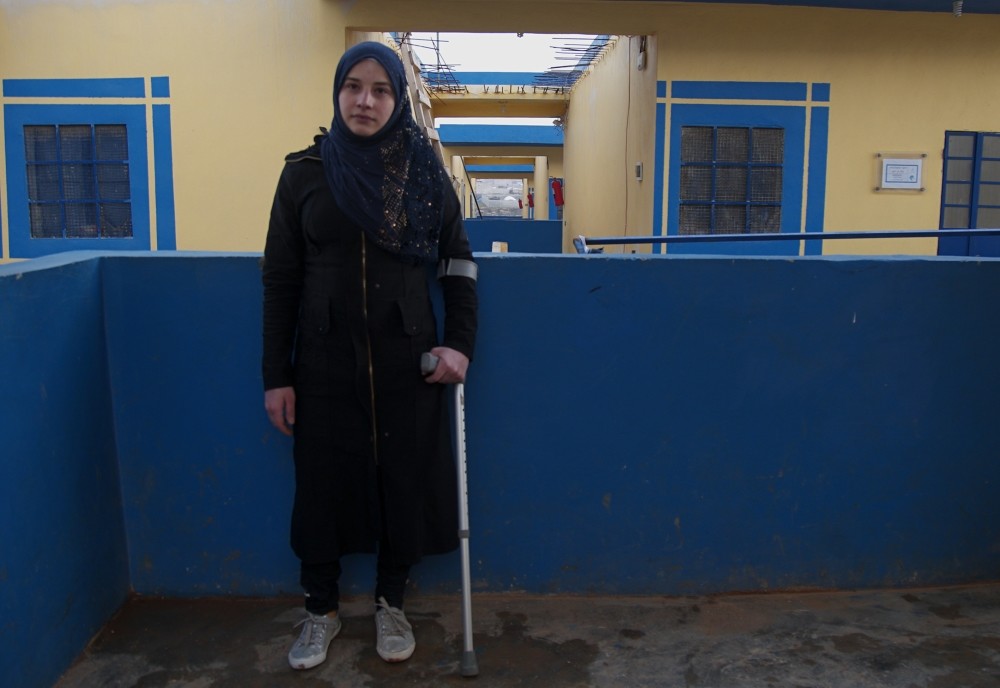 The ongoing war in her homeland Syria cost Fida Hassan many things. She lost her father, siblings and a leg in an air attack by Bashar Assad forces four years ago. She was abandoned by her husband, who took their children with him. What she did not lose though was hope. The 23-year-old woman was a volunteer teacher at a camp for the displaced in Syria's north, near Turkish border, when she met officials from Turkish and Kuwaiti charities one year ago. With their help, she received a new leg; yet, tens of thousands of people still await transplants and prosthetics in Syria, where attacks left many maimed.

"A missile ruined my life. I lost my family and my right leg. I was injured in the stomach, in the liver. I underwent a surgery and took shelter in a camp. It was tough times. I could not find a tent to stay in. Nobody helped. When I found a tent, I had no one to help me. It was difficult to live alone," Hassan said, recounting her past in an interview with Anadolu Agency. But she was determined to survive. With the assistance of the Turkey-based Humanitarian Aid Foundation and Alliance of International Doctors (AID), Hassan found an opportunity to get a new leg. She had to undergo a few surgeries that left her bedridden for nine months. The surgeries left her weak, and she weighed 33 kilograms while the treatment was underway. "But the doctors cared for me; they were like a new family. Finally, I had my transplant. I can only pray for them. I will be grateful to them for the rest of my life," she says. Though the process was difficult, Hassan says she was relieved by the "care of Turkish people." "They have been so nice to me. After I left the hospital and was in a wheelchair, the people I came across on the street have always been helpful. Whenever I see a Turk, I feel that the good people still exist in this world," she says.

AID President Mevlit Yurtseven said their association is focused on helping amputees. "It was a delight to see joy in Fida's eyes after the transplant," Yurtseven said, adding that they were trying to reach out to more people suffering from limb losses. "There are about 100,000 people who lost one or more limbs since the start of the civil war and in need of prosthetic limbs. This is an unofficial figure certainly as it is difficult to know the number exactly because of the ongoing war. AID runs three prosthetics centers in Istanbul, Şanlıurfa, located on the border with Syria, and in Reyhanlı, a Turkish town near the border. We use 3D technology there to produce prosthetic limbs. We will soon launch another center in Syria's Jarablus and want to make this a global project," Yurtseven said, speaking about plans to reach out to Somalia, Yemen and Afghanistan.